WOW, the (Emperor) Biden does whatever he wants including breaking national security laws.. Ho Hum. The hypocrisy is breathtaking ! But not to worry CNN, a dying news service, has already got it’s defensive piece out. There were hardly any (just 12) classified documents compared to the 160 for Trump. Never mind that the Mar-a-Lago raid was illegal and unethical because there are different rules of law for conservatives.  Everyone should note that only the President has the authority to declassify DOCUMENTS.  Biden was Vice president at the time these documents were found in his University desk and Biden HAS NO AUTHORITY AS VP to declassify anything.

Among the items from Joe Biden’s time as vice president discovered in a private office last fall are 10 classified documents including US intelligence memos and briefing materials that covered topics including Ukraine, Iran and the United Kingdom, according to a source familiar with the matter. Attorney General Merrick Garland has received a preliminary report on the documents inquiry, a law enforcement source said, and now faces the critical decision on how to proceed, including whether to open a full-blown criminal investigation.

Remember Sandy Burger? Refresh your memory here-> https://www.cato.org/article/national-security-state-shields-one-its-own-miscreants-again#. Burger was Clinton’s National Security Advisor who lifted documents from the national archives.  He supposedly paid a $10,000 fine with no jail time.

The shocking double standard with respect to violations of federal law committed by members of the national security bureaucracy compared to similar offenses by whistleblowers is on display once again.

So don’t fret yourself on anything being done to Biden in the present two tier justice system. Biden may get impeached for other issues like the Border, etc. But not enough politicians have the guts to do what is right in Congrss today. They don’t have a “9″ approval rating for nothing.

When news correspondent Peter Doocy questioned  Joe Biden in late August about how much notice he had regarding the FBI raid on President Trump’s home, Biden responded that he was not given notice.

Question: “Mr. President, how much advanced notice did you have of the FBI’s plan to search Mar-a-Lago?“

Biden: “I didn’t have any advanced notice. None, zero, not one single bit.”

.@pdoocy asks Biden if he knew about the FBI's raid on Trump's home pic.twitter.com/jyCRQcOhmz

White House Press Secretary Jean-Pierre was also questioned about the White House and Biden’s foreknowledge of the raid on Mar-A-Lago. When asked if he was aware of a search warrant or briefed on one, She definitively said, “no, the President was not briefed, was not aware of it, no one at the White House was given a heads up.”

When further questioned about the raid in the current political climate, she said,

Karine Jean-Pierre says Biden did not have foreknowledge and was not briefed about the FBI raid at Mar-a-Lago. She also swats down Zeke Miller's question about if the raid sends a bad signal to the rest of the world. pic.twitter.com/wU79BWcOM8

But it turns out that Biden was not telling the truth, and neither was Jean-Pierre.
The FBI raid was not independently conducted and was politically motivated.
Judge Aileen Cannon granted President Trump’s request for a Special Master review of the material confiscated by Biden’s DOJ during their raid on his Mar-a-Lago residence to “ensure a just process.”

Judge Cannon’s ruling revealed on pages 2-3 that Joe Biden ordered the FBI access to the Mar-a-Lago documents and Trump’s belongings.

President Biden lied about knowledge of the raid on former President Trump. The media is pretending like that isn't the real story everyone should care about. 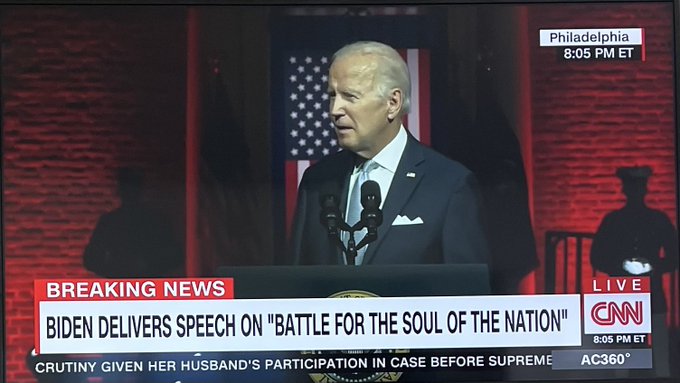 A federal judge has permitted Missouri Attorney General Eric Schmitt’s office to conduct an investigation into Big Tech collusion with the Biden Administration.

We previously wrote about the lawsuit filed in May by the states of Missouri and Louisiana against ALL of the MAJOR GOVERNMENT PLAYERS in Big Tech Censorship, including Joe Biden, Jen Psaki, Anthony Fauci, the CDC, the NIH, the Department of Homeland Security, DHS Secretary Alejandro Mayorkas, and many others.

The lawsuit alleges, and we all know this is true, that the Biden administration conspired with – and at times outright coerced – Facebook, Twitter, Google, and every other major tech monopoly, to enforce speech and thought conformity on the internet.
See a copy of the lawsuit here .