Update: July 16, 2020: I still had not heard from the Kansas Dept of Revenue and so decided to call them the first week in July to contest their refusal of my personal deduction. Despite the Covi-19 staffing crisis, I was surprised to get someone on the phone. I anticipated I might have to discuss my situation with one of the supervisors if I could get one but the fellow I drew was surprising knowledgeable. This meant the department was down to its most competent people so likely that meant only supervisors.

Explaining the problem, I wanted to know if someone had claimed me on their K-40 form. Now here is where it gets a bit bizarre. The response was that no one had claimed me or gotten my identity information so but only that I had not claimed the personal exemption.

It was an incredible statement because I remember clearly claiming the exemption. Kansas no longer provides the K-40 form, you have to download and print the desired form from the KDOR web site at: https://www.ksrevenue.org/forms.html. I remember when I printed the form, the orange category blocks appeared somewhat lighter than the original on file but my markings in those faint boxes were clearly visible and I remember claiming the exemption. My markings were close enough to the orange.box selected to ascertain what I had claimed.

However it was rejected for any number of reasons: (1) the dept couldn't be sure what box I actually checked (even though I had filed single' status, they could not be certain that one') was the correct number of exemptions). (2) Bureaucratic vindictiveness. Any and all forms are summarily rejected if there is any deviancy from their standards. Your number isn't precisely within the borders of their box or it's a half-space higher or lower than the line containing the choice selection causing confusion'. (3) Punishment. Computer rejection of your tax form (probably because of conditions listed in (2)), creating a situation where the dept must manually process the form. (4) Revenue increase, We can't eliminate my original contention that any and all means will be employed to increase tax revenues regardless of the facts. If the taxpayer accepts KDOR's evaluation and pays the extra revenue, so be it.

The state is behind in their Public Employees Retirement System (KPERS) because taxes weren't high enough during past conservative administrations. The state Supreme Court dictates what must be spent on education and the state's lawyers regularly sue the legislature to extort more money for education while also being sued by judges for not sufficiently funding the judiciary. And when you have to defend against a lawsuit wherein the state's lawyers choose the state Supreme Court judges, you can guess the outcome. Corruption in the state is rampant. It's a challenge to keep one's self solvent.

In my discussion with KDOR, it was suggested that I file an amended return which I did making certain that everything (including the orange boxes) were well defined on the form. We'll see if this one is accepted or it comes back for some other reason

In late June 2020 I received a notification from the infamous Kansas Department of Revenue that my personal exemption was NOT allowed. 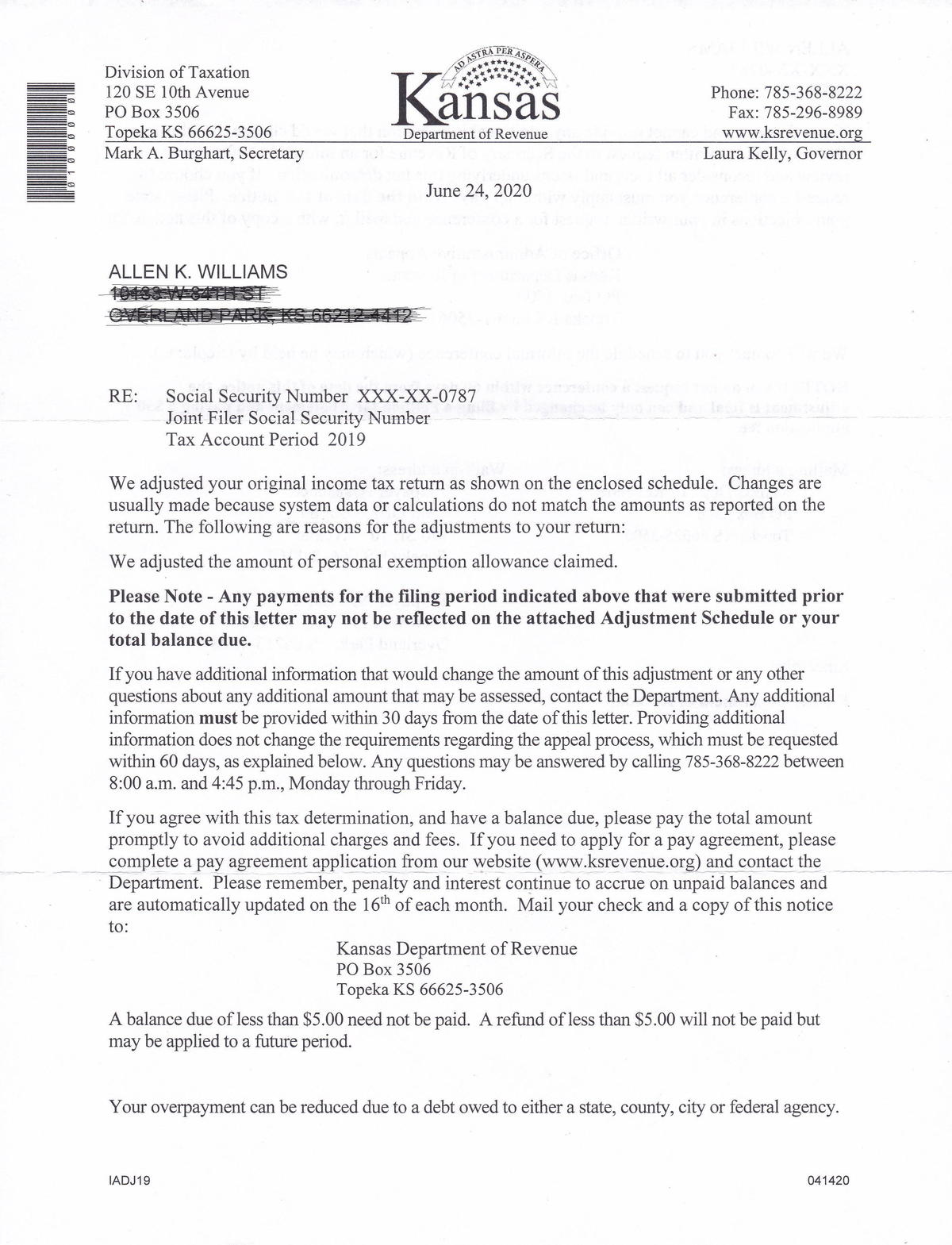 Yes, you read that correctly my $2250 standard deduction was not allowed! Why how could that be possible?, you ask. Because that deduction is available to every taxpayer filing a return you state. Yes, but only if you are NOT claimed as a dependent on someones else's return. According to KDOR instructions recorded in Kip19.pdf for 2019, LINE 5:

LINE 5 (Exemption allowance): Multiply the total number of exemptions claimed on Form K-40 by $2,250. ImportantIf you are claimed as a dependent by another taxpayer, enter "0" on line 5.

Of course, I didn't record a zero in line 5 of my K-40 State income tax form ostensibly because I thought I was not subject to reclassification based on another person's filing. 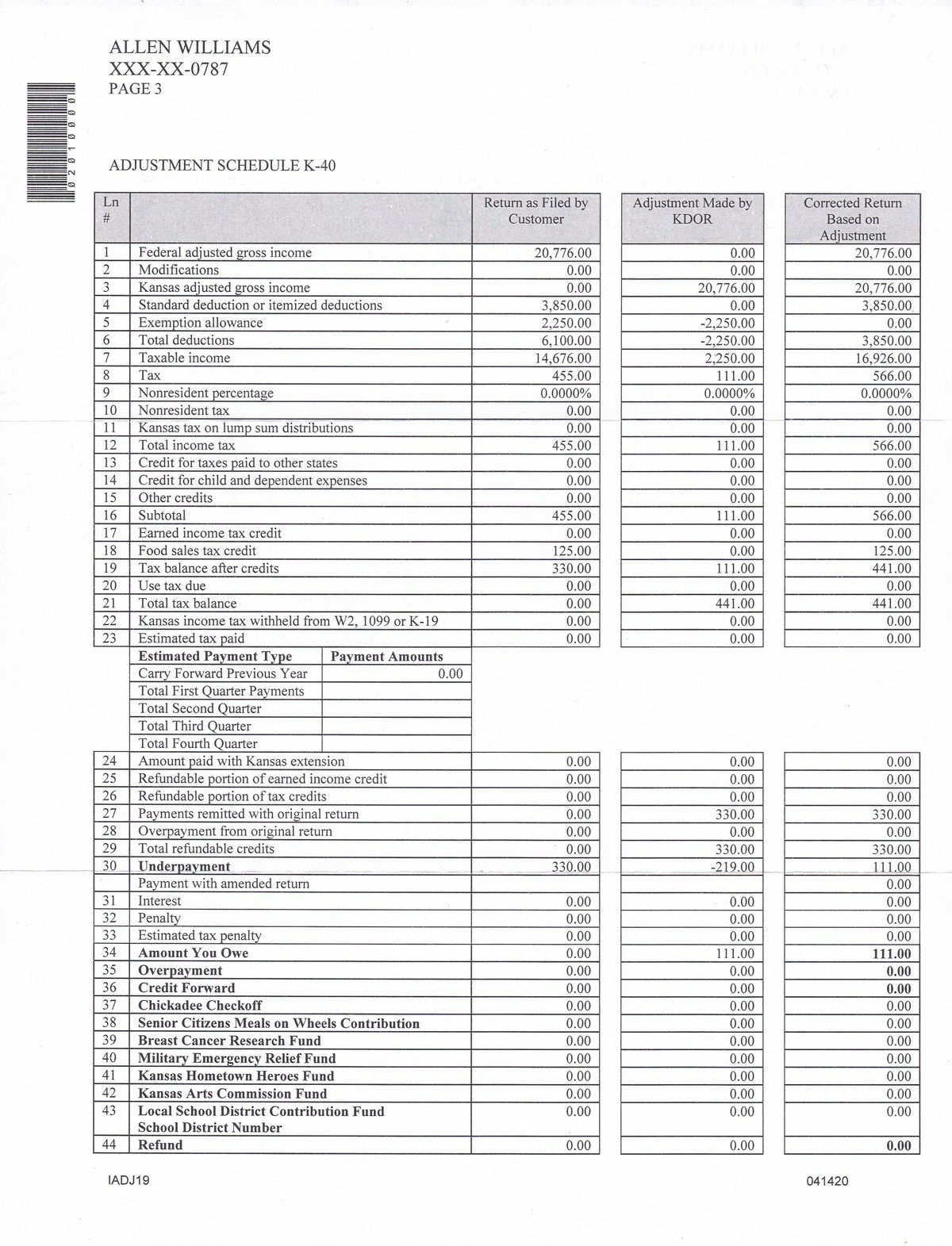 K-40 'adjustment' schedule from KDOR regarding my tax submittal.

I had just 30 days to respond. (See KDOR letter dated June 24, 2020). THIS NOTIFICATION SHOULD SERIOUSLY DISTURB EVERY TAXPAYER IN THE STATE. If this can happen to me it certainly can happen to anyone over 55.

First of all look at line 2 of KDOR's letter regarding, 'RE': their revision reasons. My return status is listed as part of a 'joint filing' submission made by parties unknown. Whoever it is I'm not related because I have no relatives residing in Kansas. But claimants are more likely to be an assisted living, nursing home or convalescent center businesses who handle a lot of clients where relationship is not relative. (Never mind the technicality that I've never been in any such facility.)

I've not signed any kind of guardianship documents naming individual(s) that could affect such a claim and there is no court order adjudicating my dependency. I have no medical conditions that would support a dependency claim and I have given NO consent to anyone to do so. Therefore there is no legal basis for this reclassification, it is PURELY outrageous FRAUD!.

The 'Exemptions and Dependents' category of he K-40 tax form requires each dependent's social security No. and date of birth to be listed along with their relationship so whoever has perpetrated this fraud has acquired my S.S. Number and date of birth otherwise KDOR would have challenged the claimant(s). However, unsurprisingly Kansas has no requirement, as does the IRS -1040 form, for the dependent to certify that he is a dependent on claimant's filing. Typically when you claim a dependent on a state form you have to FIRST claim them on the Federal form but interestingly enough I NEVER heard from the IRS. If KDOR had performed this simple check of my 1040 they would have noticed that I DID NOT check this box and coupled with my years of single filing status should have triggered a warning flag.

But remember the purpose here is to generate extra tax revenue (and ethics really isn't a consideration), so as long as the claim is reasonably accurate no need to do anything more than perpetrate the fraud because this year it costs me $111 and every subsequent year the claimant(s) wish to perpetrate it. KDOR gets the money and the claimant gets an extra $2250 deduction against their income so everyone wins but me. You may remember my 2019 KDOR posting where they had no record of my $18 tax payment (even though I gave them the check No. and date). They attempted to charge me again if I didn't produce a copy of their endorsement seal on my check. This year they're increasing the stakes. 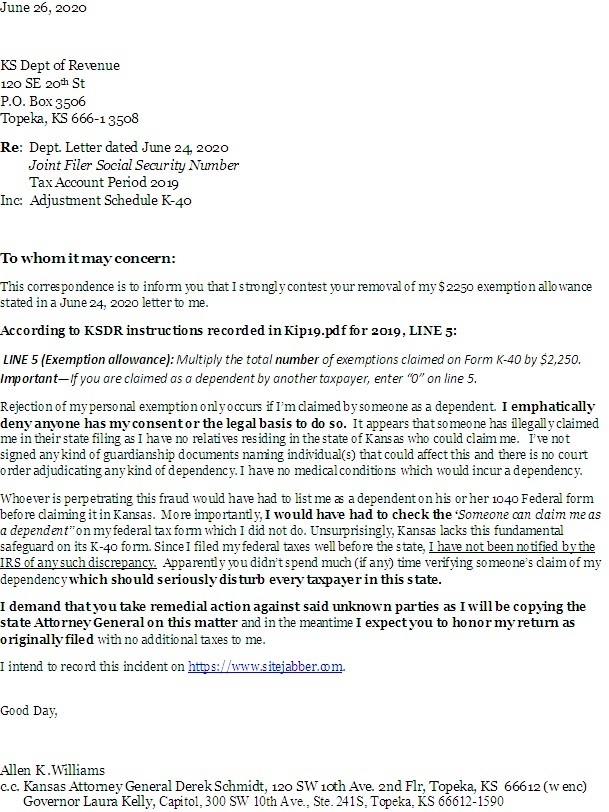 Letter to KDOR Contesting denial of my Personal Exemption.

On June 26, 2020 I filed a rebuttal to the Kansas Dept of revenue emphatically denying that I am a consensual legal dependent on any persons or business firm's return and copying the Kansas Attorney General along with the Governor. In my correspondence I demanded that KDOR take remedial action against claimants which would infer producing signature evidence of my agreement or a COURT ORDER affirming said status and in the meantime to honor my return as filed.

These people aren't particularly friendly or cooperative as they regard taxpayers as something simply to be milked. So we'll see how this goes as I await their response.