It is not yet clear whether Elon Musk’s increasingly precarious play for Twitter will result in the restoration of free speech in the “global public square.” Successful or not, Elon’s brave move has clarified beyond any doubt the Regime’s fundamental hostility to free speech and dissent. Judging from the critical reactions from journalists, NGOs and Democrat politicians, you’d think the man were attempting to invade Poland rather than remove censorship on a social media platform.
Of all the regime scribblers and scribes flooding the internet with glorified blog posts on the awfulness of Elon Musk’s Twitter bid, a piece by Renée DiResta published in the Atlantic stands out from the rest — not because of its force of argument, but because of the largely forgotten scandal behind its author.

Like the now disgraced and jobless Nina Jankowicz, DiResta is a career-girl of the Disinformation Industry — a constellation of NATO and US State Department-funded NGOs and civil society groups that censor inconvenient truths, facts and narratives under the guise of protecting the public from so-called “disinformation.” And like Nina Jankowicz, it turns out that DiResta’s name is closely associated with one of the most explosive and aggressively covered-up influence operations of the century. 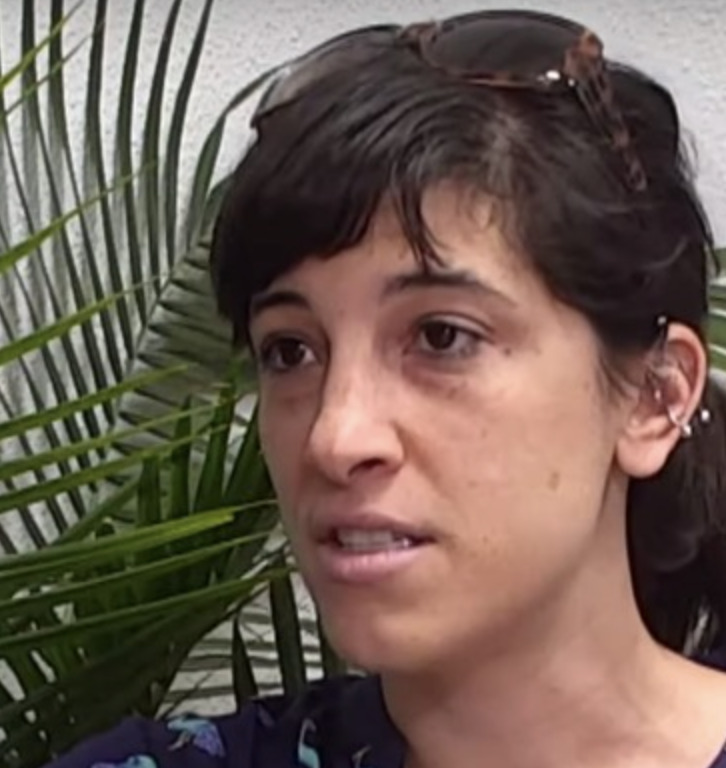 Renée DiResta — Disinformation Industry Operative
With that teaser in place, let’s start at the beginning with DiResta’s piece on Musk and Twitter. We invite the impatient reader to scroll down to DiResta’s scandal — but it’s worth the wait for those with more patience.
Like most well-trained operatives of the disinformation industry, Renée is smart enough to couch her defense of Twitter’s censorship in layers of obfuscatory verbiage and heavily qualified lip service to the importance of free-expression. We should remember that even the Department of Homeland Security assured us in a hilarious “fact sheet” that its ill-fated Disinformation Governance Board is set up to defend free speech.

But anything more than a cursory look at Diresta’s “concerned” reaction to Musk and his cadre of “free-speech absolutists” completely betrays her true agenda. Here she is scribbling away in the Atlantic (emphasis ours):

The idea of Twitter as the “global town square” was articulated by then-CEO Dick Costolo in 2013. He likened it to something from ancient Athens:

The unintended consequences of the platform that Jack Dorsey and his co-founders built, however, came into rather stark relief as it grew; a variety of unfortunate things that happen when humans engage with humans happened. On Twitter, however, these problems reached unprecedented heights via unfettered virality and velocity. The Islamic State made a home on the platform; harassment mobs proliferated; state actors and conspiracy theorists alike recognized that Twitter was a remarkable venue for propagandizing, unmediated, to millions. Public opinion began to shift against the hands-off approach. Government regulators began to pay attention.

How could the company maximize freedom of expression while minimizing the unique harms that the new communication infrastructure had enabled? A content-moderation regime emerged. Over the next seven years, its rules and practices would evolve in response to new and novel challenges: taking down terrorist propaganda, minimizing bad information during a pandemic, handling a litany of rumors and lies about election theft.

Let’s put aside DiResta’s daft use of the passive voice for a moment and take a second to appreciate how radical this passage is. The author just lumped in terrorist propaganda — specifically, ISIS propaganda — with Covid skepticism and skepticism pertaining to election integrity. Given that this is the Regime’s perspective, it is much easier to understand not only why something like the Disinformation Governance Board would exist in the first place, but why it would be housed within the Department of Homeland Security — one of the largest national security bureaucracies set up in the aftermath of 9/11 to protect the nation from terrorism.

If Covid skeptics, election skeptics, and by extension nearly half of America can be lumped in with ISIS on the basis of their political beliefs, it makes sense that the national security bureaucracy would be turned inward in order to crush the ISIS-level national security threat of Americans who oppose vaccine mandates or, God forbid, don’t think the 2020 election was fair. As we pointed out in earlier pieces, the Disinformation Industry is assigned to carry out the information warfare component of this domestic war on terror — to silence important speech on important matters central to democratic deliberation under the guise of “Defending Democracy against Disinformation.”

Renée, in her piece, is desperate to protect the Regime and its disinformation commissars from the supposed ISIS-level threat of free-speech on Twitter. She goes on to attack Musk and his “free speech absolutists” and to reject the notion of a “digital public square” in its entirety (emphasis ours):

Since the advent of more active content moderation on Twitter and other online platforms, the prototypical public square has been retconned—particularly by Musk’s supporters in the United States—into a haven for absolute free speech. This is not accurate. The real public square has always been moderated. Public-nuisance laws and noise ordinances have long placed restrictions on the time, place, and manner of expression protected by the First Amendment. Try to get a group of 100 ideological allies together to follow someone around a public park in the center of town shrieking at them, and see how that plays out.

Of course this is incredibly disingenuous. Noise ordinances and “public nuisance laws” simply do not analogize to narrative-level censorship on Covid, election results, and other such issues on social media.

Tellingly, in an earlier (and less guarded) piece for the Atlantic, DiResta not only encourages narrative-level political censorship on social media, she also claims that there is no political bias to social media censorship practices. DiResta insists that since misinformation overwhelmingly comes from the political right, this gives the false appearance that social media companies are biased against the right when they censor misinformation. Read the following passage and behold the twisted logic of a modern day commissar (emphasis ours):

The distinct behavior of serial spreaders of misinformation should theoretically make them easy for Facebook or Twitter to identify. Platforms that place warning labels on false or misleading content could penalize accounts that repeatedly create it; after an account earned a certain number of strikes, the platform’s algorithms could suspend it or limit users’ ability to share its posts. But platforms also want to appear politically neutral. Inconveniently for them, our research found that although some election-related misinformation circulated on the left, the pattern of the same accounts repeatedly spreading false or misleading claims about voting, or about the legitimacy of the election itself, occurred almost exclusively among pro-Trump influencers, QAnon boosters, and other outlets on the right. We were not the only ones to observe this; researchers at Harvard described the former president and the right-wing media as driving a “disinformation campaign” around mail-in voter fraud during the 2020 election; the researchers’ prior work had meticulously detailed a “propaganda feedback loop” within the closely linked right-wing media ecosystem.

In this piece we see reference to the same narratives, election integrity and Covid skepticism, that DiResta previously lumped in with ISIS and terrorism, perpetrated by vaguely defined alleged malefactors like “QAnon boosters” (whatever that is) and, Heaven forfend, “pro-Trump influencers.” DiResta backs up her shocking claim, that misinformation is essentially a right-wing problem, with a Harvard study. Without wasting too much of our time on it, we dug up the specific Harvard study DiResta references.

Immediately we note that the Harvard study DiResta cites in support of her remarkable claim that misinformation is exclusively a right-wing problem is funded by George Soros’ Open Society Institute, among other similar “philanthropic” organizations. Note the bottom footnote in the first page of the study, titled “Mail-In Voter Fraud: Anatomy of a Disinformation Campaign”
: 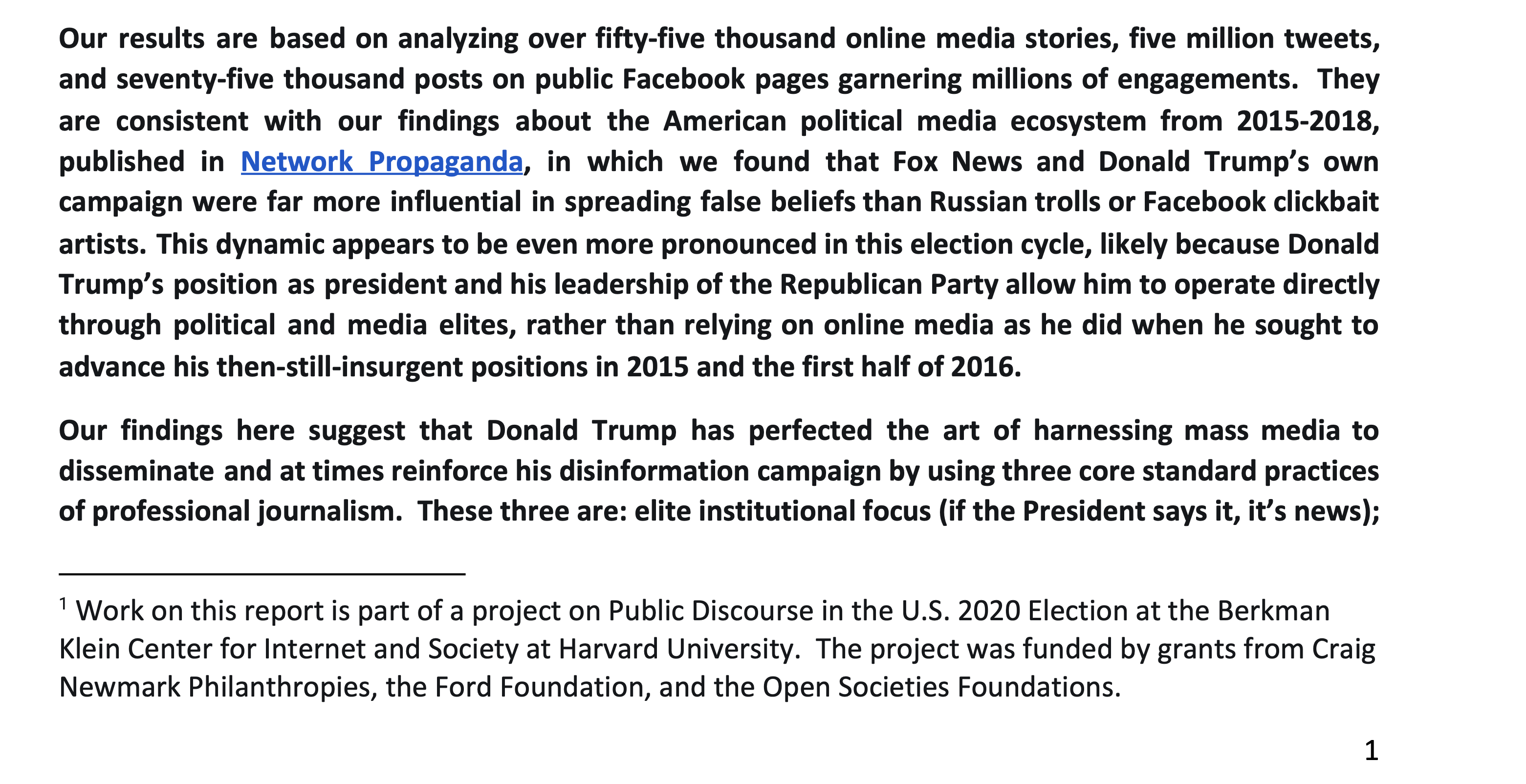 Apart from the farce of such a study being funded by George Soros, among other similar figures, there’s a very important passage buried in the study that inadvertently exposes the entire ulterior purpose of the Disinformation Industry. Here’s a transcript of the relevant passage:

Our results are based on analyzing over 55 thousand online media stories, five million tweets, and 75 thousand posts on public Facebook pages garnering millions of engagements. They are consistent with our findings about the American political media ecosystem from 2015-2018, published in Network Propaganda, in which we found that Fox News and Donald Trump’s own campaign were far more influential in spreading false beliefs than Russian trolls or Facebook clickbait artists.

Despite all the posturing about “Russia”, we see that the fight against disinformation was never really about addressing an alleged threat of foreign influence. According to the Disinformation Industrial-Complex, Donald Trump is a bigger purveyor of “false beliefs” than Russia, and therefore, by implication, Trump and his supporters deserve to be identified, silenced, and destroyed in much the same way a foreign disinformation threat would be. It is perhaps not surprising then that DiResta would so cavalierly respond to Trump being banned from his main communications platform while a sitting President of the United States:

So many folks spent the last day asking "What if Twitter bans Trump?"

My prediction was that the obvious happens – on social, he creates a Parler account (I personally think the frog platform is prob still a bridge too far), but that he also just leverages OANN/Newsmax.

Of course, DiResta’s remark about Parler turned out to be insufficiently optimistic from the Disinformation censor’s point of view. Parler went dark just days after Trump’s Twitter ban after Amazon Web Services famously pulled the plug on them.

As we promised the reader in our introduction, the story of Renée DiResta is far more scandalous than a hypocritical disinformation operative calling for mass censorship. Readers will recall that Nina Jankowicz’ name came up in a major leak as an associate of the Integrity Initiative, a NATO, US State Department, UK government-funded influence operation that secretly meddled in the political affairs of NATO Democracies. While we don’t know whether DiResta was associated with the Integrity Initiative, she was involved in something equally if not more scandalous.

Before DiResta was complaining about the threat of Elon Musk’s “free speech absolutism” in the pages of the Atlantic, she worked (among other things) as a research director for a cyber security firm called New Knowledge.

The New York Times of all places broke the story of this remarkable and now-forgotten scandal:

As Russia’s online election machinations came to light last year, a group of Democratic tech experts decided to try out similarly deceptive tactics in the fiercely contested Alabama Senate race, according to people familiar with the effort and a report on its results.

The secret project, carried out on Facebook and Twitter, was likely too small to have a significant effect on the race, in which the Democratic candidate it was designed to help, Doug Jones, edged out the Republican, Roy S. Moore. But it was a sign that American political operatives of both parties have paid close attention to the Russian methods, which some fear may come to taint elections in the United States.

One participant in the Alabama project, Jonathon Morgan, is the chief executive of New Knowledge, a small cyber security firm that wrote a scathing account of Russia’s social..