Pull back the curtain and enjoy the show.... 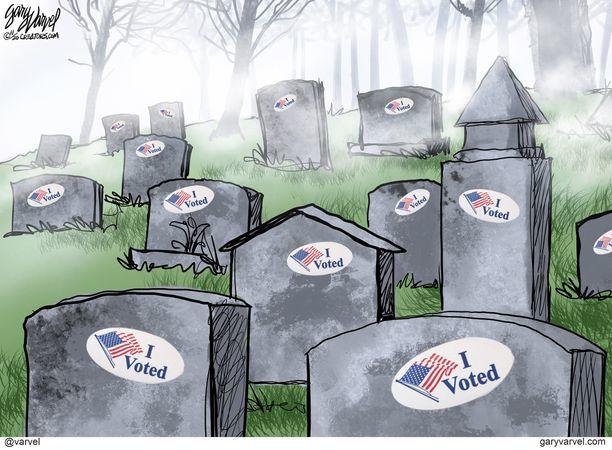 "In any case, dead voters for Biden turn out to be just the tip of an entire iceberg of election fraud. There are also the over 1.8 million nonexistent yet registered voters discovered by Judicial Watch back in September. Add to that the faulty voting system, creepily named “Dominion,” which miscounted votes to favor Biden. Add to that the undeservedly kid-gloved and fawning press coverage afforded to Biden and the US mass media’s overwhelmingly hostile attitude toward Trump. Add to that the fraudulent poll data which, just as prior to the 2016 election, was contrived to make a fraudulent Biden victory seem plausible. Add to that the amply funded organizations such as BLM and Antifa (in which the “Anti-” prefix is gratuitous, this organization in fact being very much “Fa…”) which have been ordered to protest, loot and riot in many major US cities, moving their mercenaries from location to location, where they then recruit useful idiots among the locals. What this adds up to is a vast, brazen, carelessly self-incriminating conspiracy to overthrow a sitting president through election fraud." 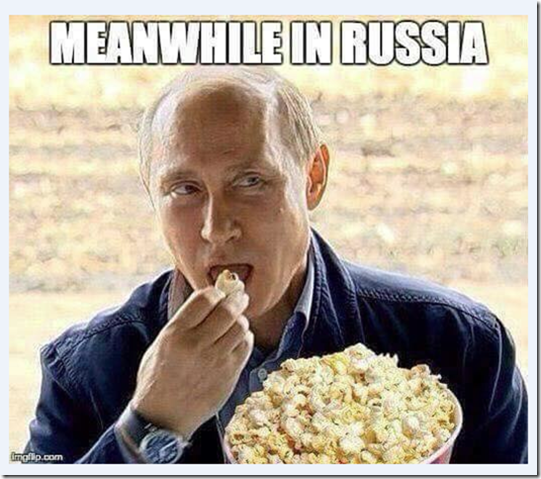 We need to double our prayers for our country and our president.

Daniel Bobinski, M.Ed. is a certified behavioral analyst, best-selling author, corporate trainer, executive coach, and columnist. He’s also a veteran and a self-described Christian Libertarian who believes in the principles of free market capitalism – while standing firmly against crony capitalism.

America is at a crossroads with revolution on our doorstep. On one side are the Patriots; those who seek to preserve, protect, and defend the Constitution. On the other side are Marxist insurrectionists; those who believe that America is evil and the cause of so many problems in world.

The Marxist-friendly side is pulling for Joe Biden to be ushered into the White House. They don’t call themselves Marxists, but as the saying goes, if it talks like a duck and walks like a duck, it’s a duck.

I’ve been writing since January that the Globalists don’t care if there’s bloodshed in America, and in March I wrote that the Left is waging a scorched-earth war against Trump.

If you’ve been reading tea leaves from the news lately, you may have already figured out what’s coming at us in the next few months. If so, the following may simply affirm your observations. But I wanted to put this out there so everyone knows what to expect and therefore won’t be surprised.

My seven predictions for how 2020 comes to an end:

Prediction 1: Trump will win the election in a landslide. I know, the media is telling you the polls are tight, but just look around. Trump rallies are packed to the gills while Biden can’t fill the bleachers at a high school football field. Trump supporters hold huge boat parades while we see NONE for Biden. Trump supporters hold freeway caravans around that country that take up all lanes of a freeway, while an attempted caravan for Biden in Las Vegas drew only 30 people. Just like in 2016, pollsters today are making it look like it’s a close race. This is gaslighting – they’re telling you something that runs directly opposite of what your own eyes are telling you, but they’re expecting you to believe what they say.

Prediction 2: On the evening of November 3, Joe Biden will not concede the election, even though the vote will clearly be for Trump. Hillary Clinton has publicly stated that Joe should not concede, so the seed has been planted in our minds to expect this. And, because we’re expecting it, we won’t be shocked by it.

Prediction 3: Massive mail voter fraud will create confusion and Marxists (e.g. Democrats) will insist that “every vote counts.” They know Americans want to be fair so Marxists will play on that. They will cry and wail and plead that every vote needs to get counted, so they’ll ask for sympathy for voters who didn’t follow confusing new election rules about how to cast their mail-in ballots. That will be their story, but many votes will be fraudulent. As they’ve demonstrated on America’s streets, Marxists don’t care about following laws; they care about power.

Prediction 4: Because of massive mail fraud ballots showing up late, election results WILL be delayed. The deceptive Mark Zuckerberg at Facebook and the clearly biased Jack Dorsey at Twitter have already announced they will flag any posts or tweets that claim a victory for Trump. They KNOW Trump will have more than enough votes to win, but as Zuckerberg already told us, we should expect results to take “DAYS OR EVEN WEEKS.” In other words, Facebook and Twitter are well-aware of the planned mail-in voter fraud, and they’re already providing cover for it. The planned vote count confusion will be dragged out as long as possible. The Marxists’ intention is to keep confusion swirling at least until December 14 in hopes that the electoral college won’t be able to identify a winner. Expect ballots to keep showing up out of nowhere.

Prediction 6: Expect Nancy Pelosi to be acting all patriotic and concerned about the Constitution during the chaos, but rest assured, it’s a passive-aggressive act. She is among the Marxist vanguard in both houses of Congress orchestrating the whole mess. You will also see some Marxist-friendly governors making a lot of noise.

Prediction 7: While Marxists in Congress are messing with the electoral process, Marxists on the streets (Antifa and BLM) will intensify their violence by burning, looting, and murdering even more than what we’ve seen to this point. There’s already a movement that seeks to lay siege to the White House. Not only do the puppet masters want all the street chaos to distract our attention from what’s going on in the electoral process, the street Marxists see this election as their only chance to either grab power or put up with Trump for four more years. The protestors have been trained to instigate violence, and copy-cat wannabes will want to join in. Street Marxists will view these riots as the fight of their lives: it will get intense.

To perpetuate the riots, puppet masters like George Soros will continue pouring money into organizations that fund them. Also remember that Antifa and BLM have threatened to go into the suburbs. Their purpose for doing so is to trigger the Soccer Moms who wants peace at all costs. Marxists will hope that these suburban moms will apply pressure on their elected representatives to give in to the Marxists so the violence will end. Life on American streets will be unpredictable and dangerous.

How does it end?

The Marxists are desperate, so the fighting will be like nothing the country has ever seen before. I predict we’ll see horrific things happening in our cities and on our streets, and traditional media (read: Marxist-friendly media) will be spewing twisted truths and lies about everything listed above. And we can’t forget that social media giants favor the Marxists in this revolution, so they will be squelching debate in whatever ways they can.

The final months of 2020 will be an emotional roller coaster, but in the end, I predict Trump prevails. It’s not going to be pretty, and many who are now thinking life will return to normal after November 3 will be sadly mistaken. They will be wondering what happened to the country they once knew.

Whether the Democrats implode or not after all this happens remains to be seen, but it is my prayer that when the dust settles, all the Marxists plotters and schemers be exposed and truth will be recognized as truth.  And then … maybe then … Trump can get on with his promise to drain the entire swamp.