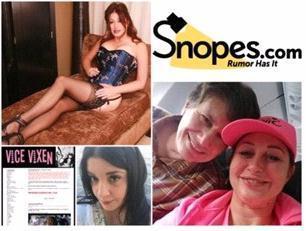 Update 9-3-2018  Do You Trust Snopes? You Won’t After Reading This.  Snopes is now 50% owned by an ad agency (Proper Media) and they make money by generating millions of views on the 3rd-party advertisements on their website. It simply makes sense for them to seek out articles that are viral to “debunk”, so that they can piggy-back on that traffic and generate more advertising revenue.
Snopes doesn’t have a formal screening process for hiring fact checkers and for evaluating applicants for any potential conflicts of interest. Without such standards, it is very easy for them to be infiltrated by those who work with the industry and who have a hidden agenda.
12-21-2016 Update:  Snopes Fact Checker Accused Of Fraud For Prostitute Embezzlement Scheme  “Snopes, the website Facebook chose to “fact check” stories to eliminate “fake news”, has been accused of defrauding the website to pay for prostitutes.”

10-25-12013 Update: Snopes NO MORE The Self-proclaimed Debunker Of Urban Legend has been debunked.. Supreme Court Dockets show Elena Kagan had represented Barrack Obama in challenges to his birth certificate. Gaylan King has produced convincing evidence of Elena Kagan representing Obama and why she was nominated for the high court. Gaylan notes: "I went to Snopes to check something about the dockets of the new Supreme Court Justice. Elena Kagan, who Obama appointed, and Snopes said the email was false and there were no such dockets. So I Googled the Supreme Court, typed in Obama-Kagan, and guess what? Yep, you got it; Snopes lied! Every one of those dockets are there."

There is some pretty good circumstantial evidence that the Democratic Alliance and/or George Soros funds SNOPES
12-18-2011 Update: Snopes Tries Discrediting Conservative News Sites, Omits Key Information
“In September, The Daily Caller News Foundation published an investigative news story that revealed that millions of tax dollars had been sent from the Department of State to a charity created by Secretary of State John Kerry’s daughter.”

Three months later, a Snopes article attempted to cover up the controversy by discrediting The Daily Caller and its investigative findings.”

David and Barbara Mikkelson are the founders and operators of 'Snopes.com', an e-mail rumor debunking site. The couple resides in the San Fernando Valley of California and reputedly founded the local Folklore Society. They have earned a reputation for determining the 'fact or fictitious ' nature of widely circulated e-mails in the Internet rumor mill. Recently an "eRumor about Snopes.com accusing them [of] being owned by a flaming liberal and..in the tank for Obama.." has been reported on by TruthorFiction.

Truth or Fiction denies any political bias on Snopes reporting but that doesn't resolve with a number of cases that I've researched. For example, Snopes claims that the author's assertion that the 'Three men who brought down Wall Street" were chief economic advisers to Obama was false, however semantics aside, the Washington Post has reported that the Obama campaign has been seeking advice from Raines on mortgages and banking issues. Interestingly enough, 'Truth or fiction' disputes Snopes findings in this very case.

In 2007, The American Family Association issued an action alert warning of the dangers of pending 'hate crime' legislation, particularly the threat of sacrificing religious liberty for 'special interest protection' which is really what the gay movement is after.

"The American Family Association is taking Snopes, the noted urban legend debunking resource, to task for its conclusion about the "hate crimes" legislation pending in the U.S. Senate." The AFA, which stands for traditional family values, issued an "Action Alert" to its constituents recently, warning that pending [hate crime] legislation could lead to a censorship of biblical perspectives on homosexuality. Snopes labeled the alert "false," denying any portion of the law could be applied to thought or speech. " - World Net Daily

It appears that the Mikkelsons, like many liberals who find minor flaws in a presentation, immediately discredit the entire piece as if the other 98% were somehow invalid. Snopes branded the AFA alert 'false' because they personally saw no threat to individual liberty within the hate crime wording.

'Hate-Crimes' are 'thought crimes' that are intended to punish the individual for 'wrong thinking' as only the state will define and preclude any presumption of innocence. The Mikkelson's 'false' statement assessment on the AFA e-mail flies in the face of recorded events in other countries, where people have either been fined or gone to jail for criticizing the lifestyle.

Pastor Ake Green, a Swedish pastor was sentenced to a month in jail for criticizing the gay lifestyle. He was later acquitted by the Swedish High Court. Then there was Scott Brockie, a Canadian who was fined $500o in 1999 for refusing to print blank letterhead and envelopes for the Canadian gay & lesbian archives. Next two Lesbians filed a Human Rights Complaint against a New Jersey United Methodist Church for denying them the use of a private Church pavillion on the beachfront for their sordid nuptials. The Church lost its tax exemption on the property as a result. The UMC is now suing the state for forcing gay marriage on the Church's property.

In a subsequent effort to debunk another 'urban legend', Snopes denies the truth of the claims for 500 tons of Uranium being shipped to Canada from Iraq despite MSNBC having published it and truthorfiction having confirmed its accuracy. CNN also reported a similar story in July 2007 on the shipment of Uranium to Canada. This is one of several instances where Snopes has been caught playing politics rather than making a factual determination.

Other discrepancies in SNOPES reporting: Obama ties to Islam "Snopes reply claims there is no evidence Obama has ever been a Muslim radical or otherwise...also quoted Obamas Senatorial page and statements as if they were irrefutable evidence. "

"In his autobiography, "Dreams From My Father," Obama mentions studying the Koran and describes the public school as "a Muslim school." - LA Times March 16, 2007 - http://www.snopes.com/politics/obama/muslim.asp

In a paradoxical 'flip-flop', Snopes confirms a request to Princeton to put a 'restriction' on distribution of any copies of Michelle Obama's senior thesis, ignoring her statement that "America was a nation founded on 'crime and hatred.' Apparently, her remark isn't radical enough to qualify nor is Obama's known association with weatherman William Ayers.

If you can believe the Newsbusters blog account, who notes: "the studied incuriosity of the Main Stream Media over the Che Guevara flag hanging in the office of Barack Obama campaign volunteer, Maria Isabel. " This was fairly well reported over the Internet, and apparently something Snopes overlooked as not germane to a radical predisposition. It appears that Communism may have gained a new acceptability at Snopes.

The Mikkelsons seem more concerned with stumping for the popular notion of ‘social justice’ here than with factual determinations. Either the Mikkelsons aren't sharp enough to understand the distinction or they're simply liberal shills.

It's a risky proposition when a small group of individuals become the 'self appointed' experts on 'what is truth' on the Internet. The notion of a select few being the truth determiners across the Internet can be a useful tool to the politicos to contain and minimize damaging information that has inadvertently found its way into cyber space.

Snopes isn't doing anything more than what the average citizen is capable of doing for themselves given the time and inclination to investigate e-rumors. The Mikkelson's determinations of 'Truth or Fiction' cannot be deemed anymore accurate or reliable than the current news media.