Since Joe Biden’s victory in the 2020 presidential election, migrants have been flooding to the border in hopes of taking advantage of his immigration policy promises. The President has taken a sharp turn away from the approach of his predecessor. Instead of instituting policies that deter illegal immigration, this administration is posting a giant welcome sign. And, unfortunately for the American public, it’s working. 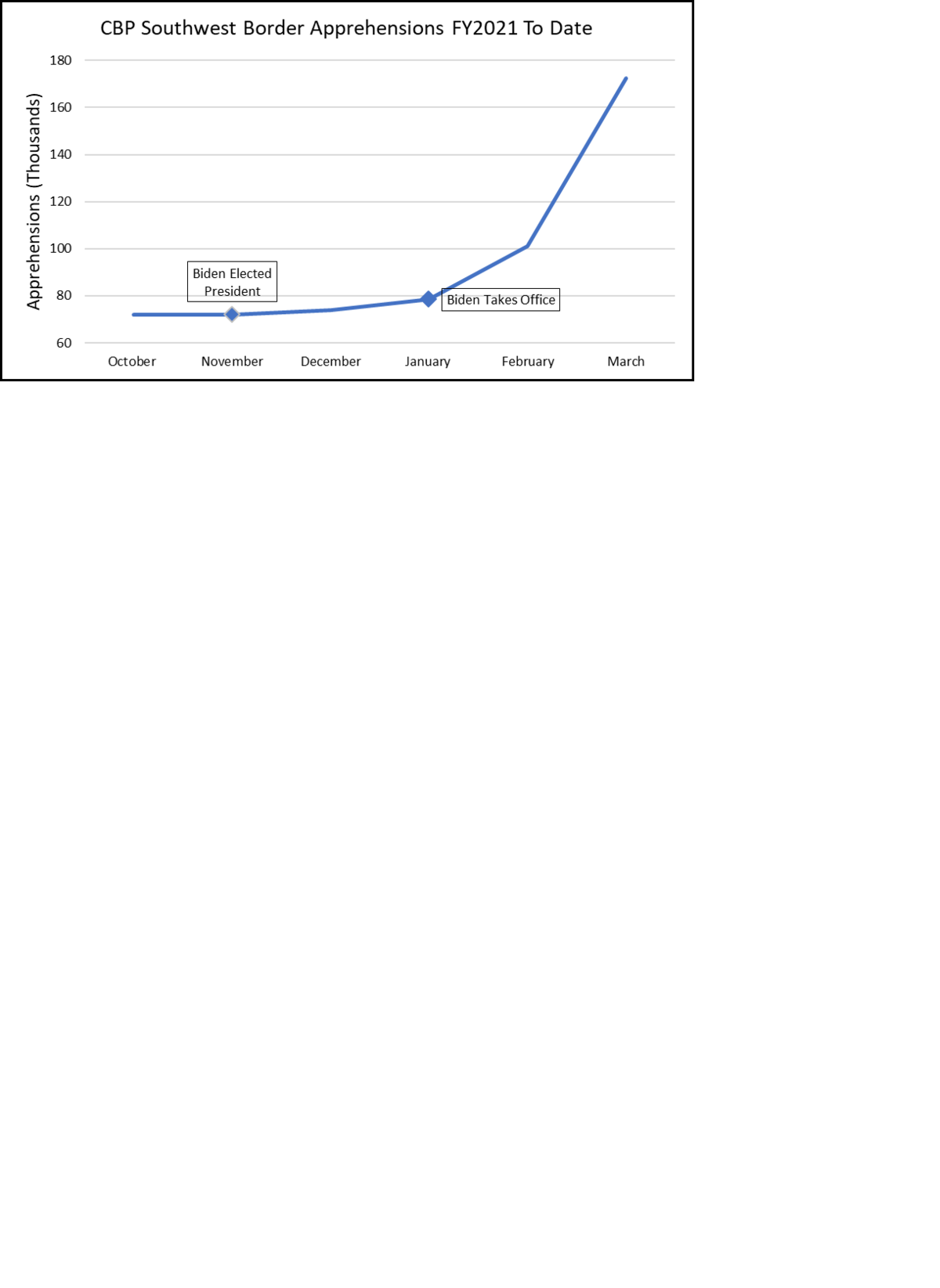 We are only one-third of the way through Fiscal Year (FY) 2021, yet the southern border is already experiencing record-breaking apprehension totals.[i] Typically, the bulk of border apprehensions occur during the warmer months of May through June. But so far this year, the southern border is seeing apprehension figures that are far higher than is typically seen during the “busy season.”[ii] At this rate, the United States is on track to make the immigration crisis of FY2019 look relatively mild. 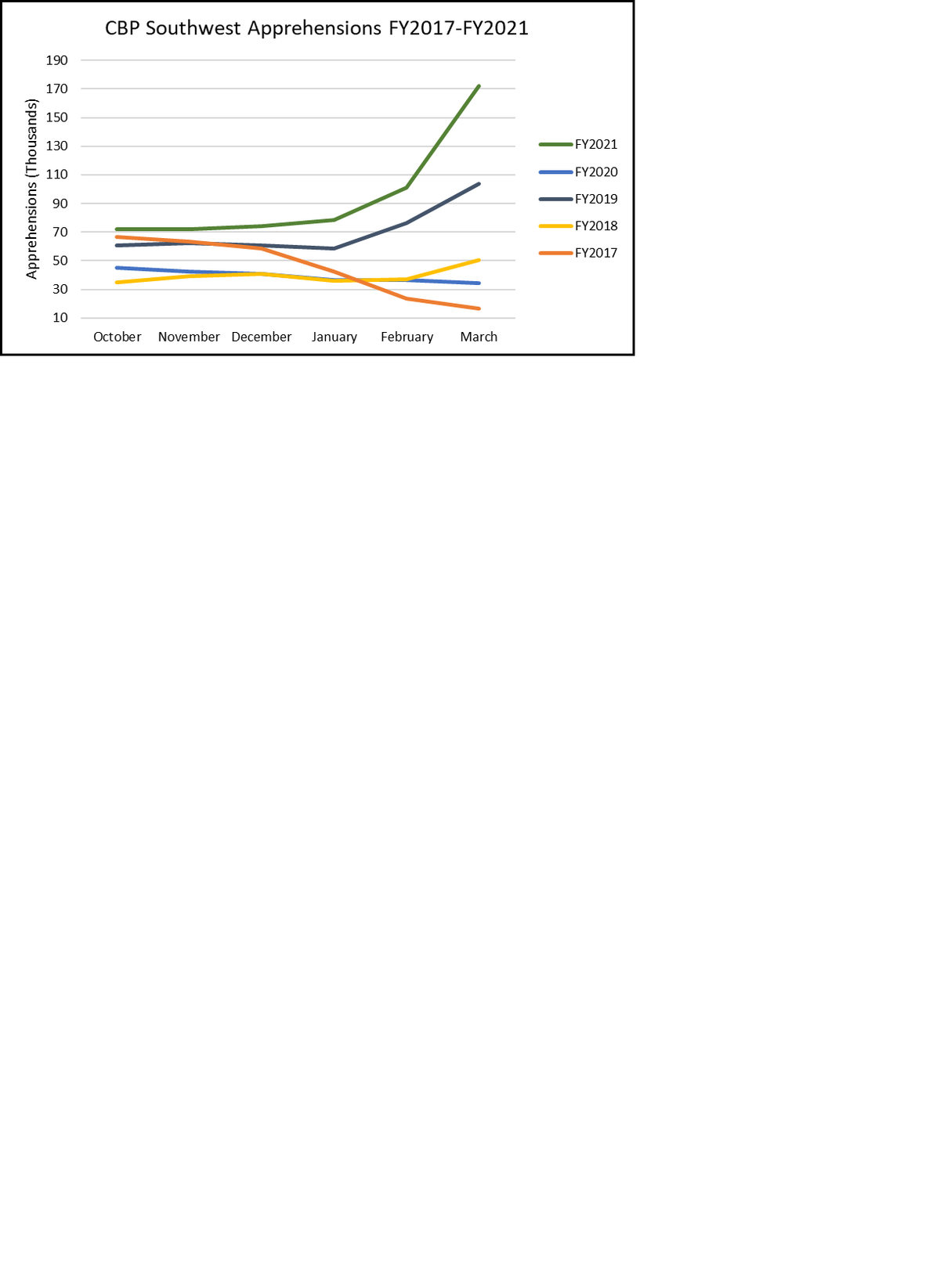 From October to March in FY2021, Customs and Border Protection (CBP) apprehended 569,879 migrants, a 35.4 percent increase from the same time period in FY2019.[iii] That year saw one of the worst surges at our southern border in history with nearly 1 million apprehensions, the highest since 2007. Totals for FY 2021 will almost certainly surpass every total for the past decade (except FY 2019) before the 6-month mark. And, considering the “busy season” on the border is still to come, the rest of the year is on track to experience historically record-breaking apprehension totals. The promise of amnesty, ending the Migrant Protection Protocols (MPP), reinstituting the Obama-era “catch and release” policy, and many other executive actions have all contributed to these record numbers. 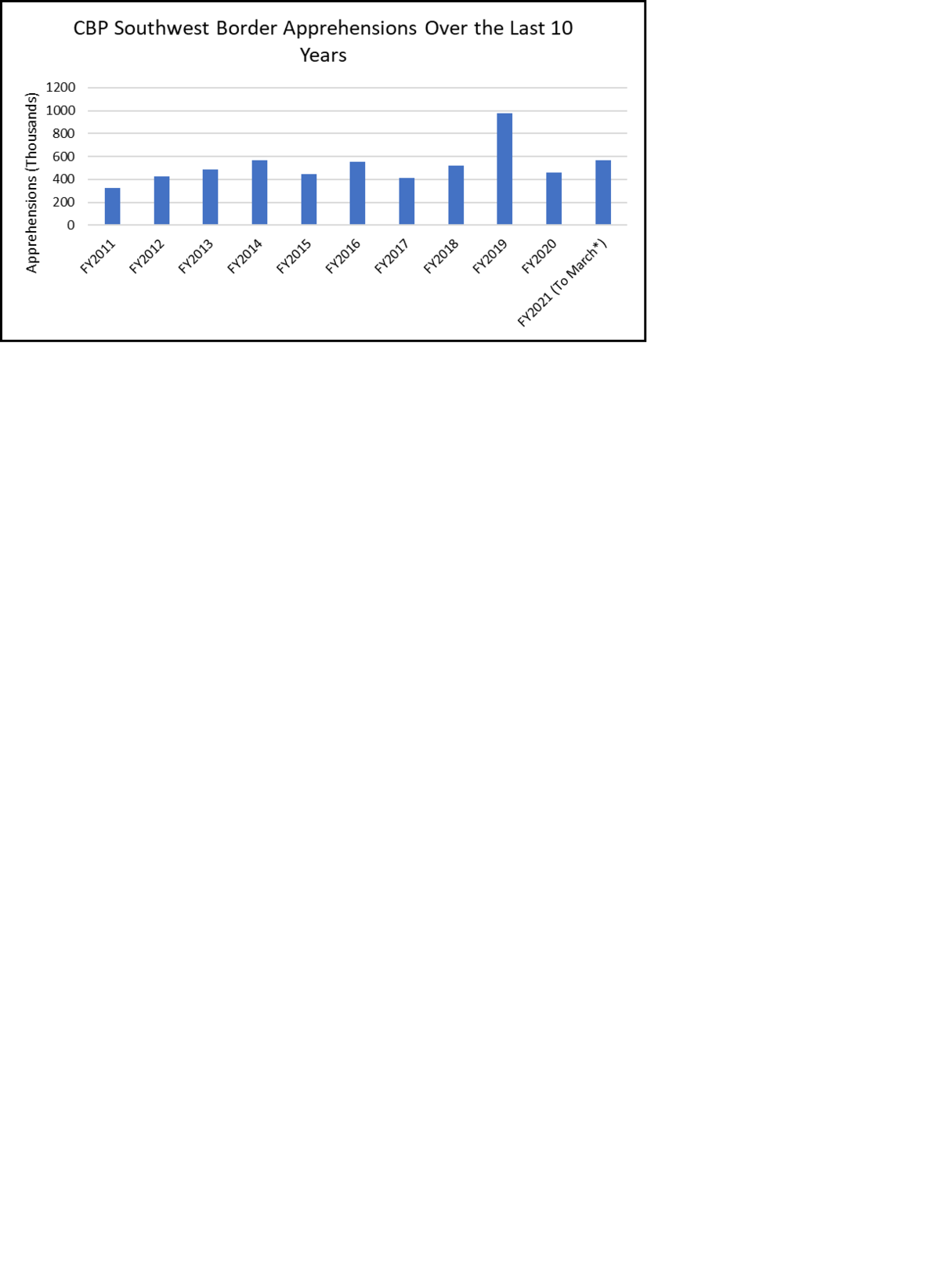 To make matters worse, the surge at the border is happening during a pandemic and subsequent economic recession. Recessions usually decrease levels of immigration, so one can only wonder what these numbers would look like if COVID was not a factor.

Moreover, according to the Bureau of Labor Statistics, about 10 million Americans are still unemployed as of February of this year. As the United States continues to recover from the economic impact of the pandemic, it makes no sense to reduce the chances of employment for Americans by increasing immigration.[iv]

Blame for the current border crisis lies solely on the shoulders of President Biden and his administration. As the aforementioned figures show, apprehensions did not drastically rise until after his election. Listed below are some examples of this administration’s worst policy changes which have caused the current crisis at the southern border.

1.  The Promise of Amnesty

In addition to drawing masses of amnesty hopefuls to the southern border, a move of this size would drastically increase legal immigration over time, with potentially more than 43 million new immigrants eventually entering the country through chain migration.[vii]

Additionally, the costs to American taxpayers would rise exponentially as most amnestied illegal aliens would qualify for state and federal welfare programs. Based on FAIR’s comprehensive fiscal cost study in 2017, illegal aliens impose a net burden of at least $133.7 billion annually.[viii] Those costs would only worsen, and at a time when the economy is still trying to recover from the COVID-19 pandemic, Americans should not be expected to bear that fiscal burden.

2.  Halting Construction of the Border Wall and Leaving Hundreds of Miles of the Southern Border Exposed

President Biden ended construction on the border wall on his first day in office.[ix] The Trump administration had previously completed nearly 460 miles of new border wall and had contracts in place for an additional 300 miles.

In some areas, high-speed roadways had already been completed as a part of the border wall system, but the physical barrier had yet to be built. Because of this, halting the construction created a smuggler’s highway. [x]

In areas with a completed barrier, the border wall has proven effective in deterring illegal crossings and cartel activity.[xi] It also increased apprehension rates as illegal activity was forced through ports of entry rather than rough terrain.

Halting construction not only invites more illegal activity along the border, but it also forfeits billions in taxpayer dollars and impacts the lives of Americans.

One New Mexico rancher told The Western Journal, “This is all a politically driven agenda… and [what is] frustrating to me is the Biden administration, they’re stopping the wall, in my opinion, to try to hurt Trump’s legacy of securing the border. When in reality all it is doing is hurting the American people.”[xii]

The Biden administration ended the Migrant Protection Protocols, or “Remain in Mexico” policy.[xiii] President Trump instituted MPP in the spring of 2019 to combat a humanitarian and security crisis that was occurring at the southern border. The policy required anyone who arrived at the border claiming asylum to wait in Mexico until their court proceedings. This eliminated much of the fraud and loopholes in the asylum system. However, since President Biden ended the MPP, migrants can once again come to the border, claim asylum, and gain entry into the United States, often disappearing into the interior of the country.

The administration also dismantled the “Safe Third Country” or Asylum Cooperation Arrangements (ACA) with the Northern Triangle governments of El Salvador, Honduras, and Guatemala.[xiv] Under those agreements, migrants of those three nations had to apply for asylum in a directly neighboring country if it were safe to do so. This initiative curbed the number of meritless asylum seekers overwhelming the United States’ southern border. Considering that the vast majority of Central American migrants leave their home countries for purely economic reasons, not the legally-permissible parameters for claiming asylum (fear of persecution on account of race, religion, nationality, and/or membership in a particular social group or political opinion), this tool effectively stopped migrants from “asylum shopping” their way to the U.S.[xv]

The MPP and ACA helped reduce the number of apprehensions at the southwest border, easing the backlog of asylum requests. However, when President Biden scrapped those protocols with Mexico and the Northern Triangle governments, he opened the door for unprecedented waves of foreign nationals arriving at the United States’ southern border looking to take advantage of loopholes in the asylum system for economic gain.[xvi]

The administration also reinstituted the catch and release policy previously suspended by President Trump.[xvii] The policy releases most recently apprehended migrants into U.S. cities along the border, thereby increasing the illegal alien population by thousands every day. This greatly incentivizes illegal immigration because migrants know that there is little chance of deportation if they get caught.

The catch and release policy has also created problems for border communities in south Texas. Mayor Pete Saenz (D) of Laredo expressed concern over the crisis unfolding in his community, saying, “The point here being, is that we need to prevent this journey from those countries to the border. It’s less risk [to] life, and limb and money, and so on to these folks. But also, to the community…” [xviii]

Migrants released into border towns as they wait for their immigration court dates have strained these cities and towns’ available resources. Mayor Bruno Lozano (D) of Del Rio did not mince words when describing the critical situation his city faces of not having enough resources or housing for the scores of migrants staying in Del Rio. Mayor Lozano said, “I am pleading and requesting with you to please put a halt to any measures regarding the release of immigrants awaiting court dates into the City of Del Rio and surrounding areas. We do not have the resources available to house and accommodate these migrants within our community.”[xix]

Texas Governor Greg Abbott (R) has also joined his fellow officeholders to address the Biden administration’s disastrous immigration policies. The Texas governor said, “The crisis at our southern border continues to escalate because of Biden Administration policies that refuse to secure the border and invite illegal immigration.” He continued, “Texas supports legal immigration but will not be an accomplice to the open border policies that cause, rather than prevent, a humanitarian crisis in our state and endanger the lives of Texans. We will surge the resources and law enforcement personnel needed to confront this crisis.”[xx]

The rise of illegal border crossings has prompted Governor Abbott to enlist several law enforcement agencies and the Texas National Guard to slow the flow of unchecked migration into his state. This border crisis has garnered concern from elected officials from both political parties.

Under the Biden administration, many interior immigration enforcement and border security agencies have received orders to scale back arrests, deportations, and general border security. For instance, many CBP agents have been ordered to stop patrolling the U.S.-Mexico border for unlawful entries and external threats, and instead administer the transfer of families and unaccompanied minors to detention facilities.[xxi] The COVID-19 pandemic has led to capacity limitation at detention facilities, so border agents must create make-shift camps to house apprehended migrants.

In terms of interior enforcement, the administration issued a memorandum in January of this year that limits the arrest and removal authority of Immigration Customs and Enforcement (ICE) agents.[xxii] The directive bars ICE agents from detaining and subsequently deporting most illegal aliens, including many who have committed crimes beyond illegal entry.[xxiii] This change in deportation policy, coupled with a newly de-secured border, individuals with criminal records are seeing this policy change as an invitation to enter into the United States’ illegally.  For example, the San Diego Border Patrol says they are on pace to apprehend a record number of convicted sex offenders along the border this year.[xxiv]

What Others are Saying About the Biden Border Crisis

Many border states and jurisdictions are feeling the repercussions of these reckless policy actions by the Biden administration:

Even members of his own political party are criticizing his approach toward the crisis:

Despite these pleas, the Biden administration refuses to acknowledge the crisis at our border:

While the situation at the border is dire, it would immediately begin improving if the Biden administration would simply rescind his worst executive orders regarding immigration, and institute several new common-sense reforms. Below is a short list of policy changes that could be enacted at the executive level to immediately alleviate the crisis created by the current administration:

All of these actions taken by the Biden administration are directly to blame for the crisis along the southern border. Each policy and promise further incentivizes illegal immigration. The administration has touted a promise of open borders, citizenship, and work permits for all throughout their campaign. So, it should come as no surprise that hundreds of thousands of migrants have already tried to enter the U.S. in hopes to take advantage of these promises. And there is no doubt that thousands more will continue to do the same in the coming months.

President Biden must reverse course on his immigration agenda if he wishes to properly serve the interests of the American people. He can begin that by admitting it was a mistake to dismantle interior enforcement and border security and restore the tried-and-true policies that helped stem the border crisis in 2019. Beyond that, he must show American citizens that they are his top priority by focusing on social and economic initiatives that benefit those who are legally allowed to be in this country, and de-incentivize illegal immigration.