The lure of municipal bonds as a ‘tax free’ investment can be very appealing, however, it’s the risks that significantly decrease its potential, risks that are never satisfactorily explained by the purveyors of these instruments, other than in ambiguous terms. The claim is that one would require an investment paying 8% to provide the same benefit as a tax free municipal bond, but is that true?

Congress ensures that no one truly attains tax-free status on any investment beyond themselves, despite many statements to the contrary, because of the Alternative Minimum Tax. Government simply adjusts the tax tables and reduces the social security benefit by an equivalent amount for tax-free interest received.

NuVeen offers tax free bond investments in the states of Kansas, Kentucky, Michigan, Missouri, Ohio and Wisconsin. The company offers four basic types of municipal bonds that claim tax-free status. They are ‘A’, ‘B’, ‘C’, and ‘R.’ We will confine discussion here to ‘A’ and ‘B’ bonds. ‘B’ bonds perform nearly identical to ‘A’ bonds but provide slightly less yield because they lack liquidity. Once purchased, they require a holding period before they can be sold. ‘A’ municipal bonds provide a slightly better return than class ‘B’ municipal bonds because the management fee has thus far been less. But, you may expect to pay at least a 4.0% ‘commission’ up front for the privilege of purchasing ‘A’ tax free bonds. The company’s prospectus notes that certain ‘special’ charges may apply when buying $50,000 or more of ‘A’ bonds depending on who offers them and the terms of the fund.

One may expect to pay a monthly management fee anywhere from 0.53% to 0.75% on the gross assets invested to manage the funds, regardless of the type bond purchased or its performance throughout the time of the holding. There is a penalty for selling class ‘B’ bonds ‘too quickly’, thereby depriving the fund manager of his ‘hard earned’ management fee.

A first investment in ‘B’ tax-free municipal bonds was made during the late summer, i.e. Aug. of 1998 through NuVeen Investments or The Boston Group as they are now known. Although the funds were purchased in late August, it was Oct 8th of that year before the first dividend check was received. It seems that the Capitol One true blue Kansas broker was able to collect the interest on my investment, as the funds were deposited with him for 7 weeks while Nuveen ‘processed’ the new account. When questioned on this, the broker indicated that it was typical because of the high demand for these investments. So, either the broker enhanced his earnings or both he and the company benefited during this time. It’s tantamount to buying a $300,000 house with 20% down and closing several months later. The realtor pockets the interest on your $60,ooo down payment with no credit to you during the wait. And, that’s in addition to the selling commission; it’s one reason why realtors favor substantial down payments.

NuVeen seems to function loosely and haphazardly at best for an investment firm. Reports on the bond funds investment performance tended to skip data such as the dividend rate during the period of interest. Early on, I had been required to garner a signature medallion notarization to buy or sell my bond shares over the telephone, which was done on March 4th, 2005 in anticipation of divesting some of my holdings. However, on March 23rd I received a notice from the company that my Telephone privileges had been cancelled.

NuVeen was informed that no one had authority beyond me to cancel since I was the sole owner of the account and had a valid notarization. However, I had to Fax a second copy of the original notarized form (and threaten them) in addition to the one I had already mailed. It was Sept. 22, 2005 before I finally got the company to re-instate the telephone privileges that I had requested in my original March 4th letter. The broker had apparently acted to thwart my ability to sell without utilizing his services.

The holding period for converting Kansas Class ‘B’ to Class ‘A’ tax-free municipal bonds was changed from 6 to 5 years and then back to 6 years again on little more than company whimsy. Class ‘B’ bond rollovers are automatic after 6 years, whether you want them to or not and whether or not it is favorable to you, the holder. In the former case, it prevented me from divesting some of my holdings for more lucrative financial opportunities because an earlier buyout of Nuveen put me right back in the CDSC band that I was just exiting under the original terms. So, instead of being able to sell at the end of the 6th year from the original five-year hold, I had to wait until the 7th year before I could divest.

The ‘tax free’ fund was trading at $10.63 per share in Sept of 1998. Despite some brief upswings, the fund had fallen to $10.54 by the following year and at the end of the 6 year holding period, just before the Fannie Mae and Freddy Mac bankruptcies, had settled in around $10.15 per share. So, what does this translate to in terms of dollars and cents? Well, first let’s calculate the cost of bond conversion. What? You thought they just transferred the shares like you deposit money? Not so, here’s how conversion works on a typical $10,000 class ‘B’ investment purchased at $10.63 per share and now worth $10.44 per share:

Class ‘A’ bonds typically command a higher per share price than ‘B’ bonds largely due to their liquidity. So, you will likely lose shares as well as portfolio value in any bond transitions since there is no set time prior to Dec. 31st of the last holding year to require the company to effect conversion. It likely won’t be the next business day from the anniversary of purchase as is the case with a bank investment. The transaction is done automatically by the company if the shares have not been divested and you don’t get any options for the time of conversion. So now, class ‘A’ shares at $10.53/share are purchased by the Fund:

Well just sell off the ‘B’ bonds before they convert and there’s no problem, right? Well that’s not-quite true. A purchaser pays no up front fee to buy class ‘B’ bonds but pays a Contingent Deferred Sales Charge, i.e. CDSC, if they are sold anytime before 6 years and you may expect this requirement to change occasionally in favor of the bond issuer especially after you own the investment.

The CDSC charge is graduated based on the number of years the bond is held as follows: 5% the first year, 4% the second and 3rd years, 3% the 4th year, 2% during the 5th and 1% during the 6th. So, class ‘B’ bonds must be held 7 years before there is no CDSC sales charge to the holder, assuming the company doesn’t decide to ‘up’ the requirement. Yes, issuers of municipal bonds get to ‘change the rules ‘ after you own the investment due to buyouts and mergers just like banks, except banks usually continue to honor any preexisting CD terms from the financial institution bought. However, investment concerns like NuVeen, dealing in municipal bonds, do not. There is also the problem of declining share worth because bond values fluctuate like stock market shares, so losing $0.50 cents per share on the sellout is of greater concern than paying small CDSC commissions. There is an optimum time to sell.

NuVeen has a history of buyouts since my original 1998 purchase, the most recent is their acquisition by the Boston Group. Buyouts often present a convenient terminus for changing the rules on existing investments. This company has altered dividend quantities, dividend pay out times, the hold time for divesting bonds as well as the holding period for conversion to Class ‘A’ bonds.

Dividends from the fund were initially due on the 4th of the month but the most recent buyout settled on the 9th and often was the 11th before they were actually distributed. It should be noted that there is no penalty to the company, no matter when they make the distribution. The monthly holding time requirement for selling bonds shifted to the 29th of the month, i.e. if the bonds are sold prior to this date, the holder automatically forfeits the dividend for that month. So, if I held the investment until the 28th of the month and then sold, I would lose my dividend because its not prorated and the sale was prior to the 29th. You won’t read this on their website at http://www.Nuveen.com, change notification comes by letter and it can come at anytime.

In November of 2007, I received just such a letter: "We would like to take this opportunity to inform you of a change that will take place regarding your NuVeen investments bond mutual fund dividends. Starting in December of 2007, you can expect to receive your monthly dividend check approximately four days later than you receive that check currently. This change is a result of moving the record date from on or about the 9th of each month to three business days prior to the payable date. Moving the record date will allow a larger window during which investments received will be eligible to earn the dividend payable the following month." - Nuveen Investments.

This is pure nonsense. The shift has been made to facilitate the brokerage, first in collection of the monthly management fee and secondly, to accommodate delayed interest payments from the participating states, it gives no benefit whatsoever to the bondholder. The Nuveen letter also fails to note a corresponding shift in the monthly holding time, prior to divesting, as a result of the dividend change.

Tax-free municipal bonds work along the same lines as a ‘slush fund.’ They’re intended to be ready resources for states that can’t manage money. Interestingly enough, both Kansas and Michigan fall into that category with high tax economies and poor growth. States with poor economic policies seek to increase taxes to pay the interest on what they borrow through the sale of bonds. Impoverishment of the citizenry and cheating investors is of no concern to those who hold political office, staying elected is the only objective. Investment firms like NuVeen are ready to capitalize on state's poor fiscal management.

Income tax table adjustments and negotiating lower bond rates are means by which states can ameliorate interest burden and hedge against future operating costs at the expense of taxpayers.

Unlike fixed investments, bond interest rates fluctuate with economic conditions. Bond rates generally fall when the economy is good and increase when it is bad because states are more likely to vorrow during poor economic times. However, Kansas NuVeen municipal bonds ‘went south’ right from the start and were poor performers during the time of my holdings, regardless of the condition of the economy, demonstrating a steady downward trend over a ten-year period. 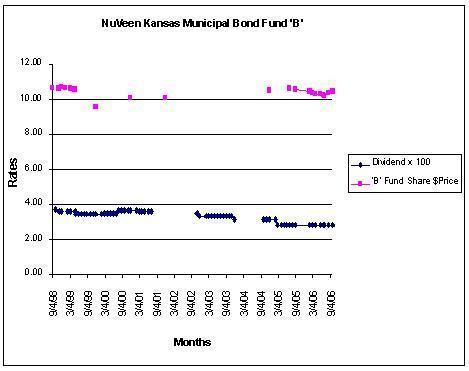 The supposed strength of tax free muni-bonds is the taxes you don’t pay. The NuVeen motto claims, "it’s not what you earn, its what you keep." So how much did I keep due to NuVeen bond fund performance? Well, in 1999 the tax benefit was $152 dollars per 1000 of capital allocated to bonds but by 2006 the savings were down to $101 dollars per 1000. This is a 35.6% drop in tax benefits for capital invested in bonds in addition to the 24% drop in dividend rates during the same period.

It’s an obvious conclusion at this point that the fund is managed for the benefit of the states that sell the bonds.