Kansas Gas Corporation is back for another rate increase in just two years, Docket No.:18-KGSG-560 RTS   The last one having been approved in 2016.  KGS is a subsidiary of ONE Gas.  ONE Gas Inc is another large conglomerate supplying Oklahoma, Eastern Kansas and parts of Texas where guaranteed levels of income are desired regardless of overall consumption.

“The Tax Cuts and Jobs Act cut the corporate rate from 35% to 21%.. Utility companies are passing on the tax savings in the form of lower rates for customers,” – Americans for Tax Reform.

But this phenomenon is apparently not true in Kansas where utility rates continue to rise.

The ONE Gas financial report at http://investor.onegas.com/news/news-releases/news-details/2018/ONE-Gas-Announces-First-quarter-2018-Financial-Results/default.aspx  shows:

So KGS admits revenues are up from a combined increase in Texas and Kansas but it’s NOT enough! There appears to be no end to KGS rate and new cost factor requests, the latest being the Kansas  Gas System Reliability Surcharge which now is to include Cyber attacks.  Why not include impact from the stock market impact in a cost factor as well?

Requests for Kansas utility rate increases are a revolving door chiefly to guarantee satisfactory dividends to ONE Gas investors.  The current KGS request increase is a 10% rate hike to consumers when inflation currently stands at 2.3%.

Is there ANYTHING the rate payer is NOT being asked to fund?  Where is the promise of lower rates to get the earlier rate increase approvals?  Just lies as the market for gas has improved revenues rather than diminished them. Instead rate payers are asked to pay dividends of $3.35 a share. But why stop there? Why not $5.15 or even $10 a share?

General Motors a for profit corporation is paying just $0.38 cents per share as of their 1st Quarter 2018 financial report:  http://quote.morningstar.com/stock-filing/Quarterly-Report/2018/3/31/t.aspx?t=:GM&ft=&d=8ba56ee4bdd422dcb28a39f579bc9cda while Kansans are forced to pay dividends in the dollar range. WHY?

Extraneous surcharges mask the true price users pay for gas services and in effect are automatic rate bumpers that increase consumer bills unfairly for such things as weather, reliability etc. It is an effective hedge against conservation.  These charges are designed to keep utility bills from advantaging consumers by being too low.  The KGS COG delivery charge is an example.   In Sept of 2018 the service charge was 0.4 MCF at a stated rate of $3.85 per 1000 ft3.

Extraneous surcharges mask the true price users pay for gas services and in effect are automatic rate bumpers that increase consumer bills unfairly for such things as weather, reliability etc. It is an effective hedge against conservation.  These charges are designed to keep utility bills from advantaging consumers by being too low.  The KGS COG delivery charge is an example.  In Sept of 2018 the service charge was 0.4 MCF at a stated rate of $3.85 per 1000 ft3.

The result is that KGS customers will pay nearly 15 times as much for the gas to be delivered to their home as for the actual gas consumed not to mention all the other ‘hedge factors’.  The rest of the bill is local taxes.  When service charges exceed the cost of a product by double digits the company is gouging consumers.

Why do ONE Gas/KGS customers have to fund dividends at a higher rate than General Motors, #21 on the 2017 fortune 500 list despite a record federal tax cut?

I seriously question the company’s claim that it has “experienced increases in payroll expenses and supplier costs” to justify their current rate request. These cost claims appear to be creative paper expenses towards the end of providing investor dividends.

102 other utilities have either decreased rates or ceased rate requests but not Kansas?

The KGS rate increase is nothing short of rubber stamp legalized robbery. 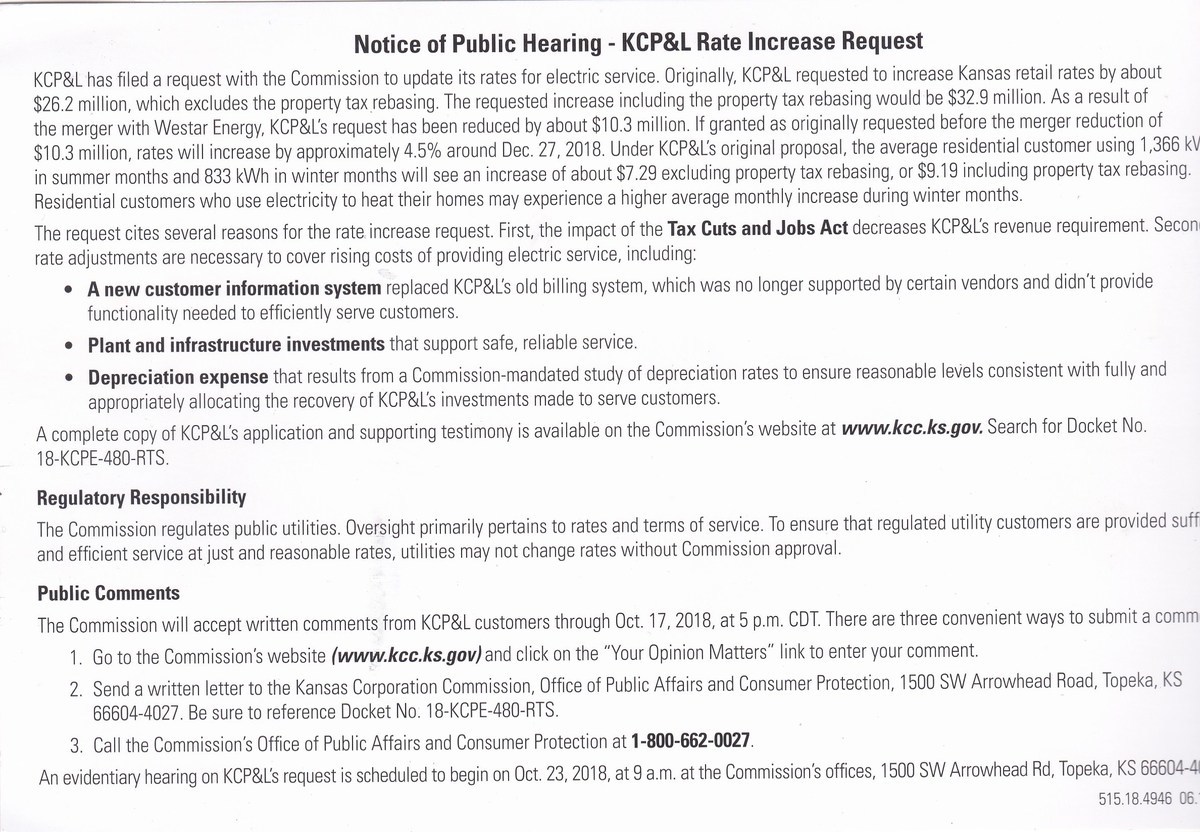