This is amazing. There are two parts to this.

Thomas Jefferson was a very remarkable man who started

At 5, began studying under his cousin's tutor.

At 9, studied Latin, Greek and French.

At 16, entered the College of William and Mary.

Also could write in Greek with one hand, while writing

the same in Latin with the other.

At 19, studied Law for 5 years starting under George Wythe.

At 23, started his own law practice.

At 25, was elected to the Virginia House of Burgesses.

of the Rights of British America," and retired from his law practice.

At 32, was a delegate to the Second Continental Congress.

At 33, wrote the Declaration of Independence.

At 33, took three years to revise Virginia's legal code and wrote a Public Education bill and a statute for Religious Freedom.

At 36, was elected the second Governor of Virginia, succeeding Patrick Henry.

At 40, served in Congress for two years.

At 41, was the American minister to France and negotiated commercial treaties with European nations    along with Ben Franklin and John Adams.

At 46, served as the first Secretary of State under George Washington.

At 53, served as Vice President and was elected President of the American Philosophical Society.

At 55, drafted the Kentucky Resolutions and became the active head of the Republican Party.

At 57, was elected the third president of the United States.

At 60, obtained the Louisiana Purchase, doubling the nation's size.

At 61, was elected to a second term as President.

At 65, retired to Monticello.

At 81, almost single-handedly, created the University of Virginia and served as its' first
president.

At 83, died on the 50th Anniversary of the Signing of the Declaration of Independence, along with John Adams.

Thomas Jefferson knew because he himself studied, the previous failed attempts at government. He understood actual history, the nature of God, His laws and the nature of man. That happens to be way more than what most understand today.

A voice from the past to lead us in the future:

John F. Kennedy held a dinner in the White House for a group of the brightest minds in the nation at that time. He made this statement:

"This is perhaps the assembly of the most intelligence ever to gather at one time in the White House, with the exception of when Thomas Jefferson dined alone."

"When we get piled upon one another in large cities, as in Europe, we shall become as corrupt as Europe."    -- Thomas Jefferson

"The democracy will cease to exist when you take  away from those  who are willing to work and give to those who would not."     -- Thomas Jefferson

"It is incumbent on every generation  to pay its'  own debts as it goes. A principle which if acted on, would save one-half the wars of the world."     -- Thomas Jefferson

"I predict future happiness for Americans if they can prevent the government from wasting the       labors of the people, under the pretense of taking care of them."    -- Thomas Jefferson

"My reading of history convinces me that most bad government results from too much government."     --     Thomas Jefferson

"No free man shall ever be debarred the use of arms."    -- Thomas Jefferson

"The strongest reason for the people to retain the right to keep and bear arms  is,  as a last resort, to protect themselves  against tyranny in government."      -- Thomas Jefferson

"The tree of liberty must  be refreshed from time to time with the blood of patriots and tyrants."     -- Thomas Jefferson

"To compel a man to subsidize with his taxes, the propagation of ideas which he disbelieves       and abhors, is  sinful and  tyrannical."      -- Thomas Jefferson

I wish we could get this out to every American!

So Please do yours.

I’d like to address an issue that is somewhat misunderstood today, having undergone a great deal of malignment throughout the last four decades and beyond.  I begin by asking what is righteousness?

Is it a state of mind, a label, or just a characteristic that defines a good citizen. This is what a popular dictionary claims: WikiPedia defines “Righteousness as the quality or state of being morally correct and justifiable.[1] It can be considered synonymous with "rightness" or being "upright".[2] It can be found in Indian religions and Abrahamic  traditions as a theological concept. For example, from various perspectives in Hinduism, Buddhism, Islam, Christianity, and Judaism it is considered an attribute that implies that a person's actions are justified, and can have the connotation that the person has been "judged" or "reckoned" as leading a life that is pleasing to God.”

This definition starts out well but beyond the first two sentences tells us nothing but in the most general terms of what is right behavior. Wikipedia more aptly describes the mindset of the world’s perversion of righteousness in a universal platitude claiming   many ways can be regarded as righteous, offering nothing in true understanding, so we must look elsewhere to find the answer.

America was founded on a narrow set of principles expressed both in the Declaration of Independence and in the bible from which the principles of Liberty, prosperity and safety were expounded. America did not worship a universal god or a deity that expects nothing of his creation but a real benefactor God who chose his people based on Abraham's obedience out of which blessings would continue to flow to his descendants if they met His conditions.

The bible gives a thorough view of righteous behavior. It's enlightenment depicts a way of life devoid of political correctness, popular convention, myths and false assertions.

In Romans 10 verse 3 we learn that ”For they being ignorant of God's righteousness, and going about to establish their own righteousness, have not submitted themselves unto the righteousness of God. “

After all government and social conventions typically interject their mindset defintions of what is righteous most often under the force of law. Certainly obeying the civil authorities defines a type of rightness but like social convention both have done much to redefine what behaviors are ‘righteous’. For example, same sex lifestyles are now regarded as acceptable along with cross dressing which infers a kind of rightness.  Even child murder is accepted under a personal ‘choice’ umbrella.

But Proverbs 30 verse 12 reveals what the world mindset is “There is a generation that are pure in their own eyes, and yet is not washed from their filthiness.”

Reverend Raphael Warnock, the newly elected candidate for the Georgia Senate, has publicly expressed the view that abortion is fully consistent with his role as a shepherd of God’s people which infers righteousness. However Mr. Warnock’s statement is just the world’s definition of righteousness repackaged and is the cause of the moral confusion and decay observed in today’s culture.

In Psalm 119, verse 172 we read “My tongue shall speak of thy word: for all thy commandments are righteousness. "

You don't have to be a rocket scientist to understand how badly the American legal system has abused this passage. Mr. Warnock’s judgment is critically flawed and in conflict with the bible’s definition of righteousness.

Righteousness is conferred to us when we obey His laws as stated in Deuteronomy 6:25: ”And it shall be our righteousness, if we observe to do all these commandments before the LORD our God, as he hath commanded us.”

What Commandments? Christ outlines them in Matthew 19, verses 18 and 19. The sixth commandment expressly forbids murder, so again Mr. Warnock’s position on abortion as being consistent with his role as a Sheppard of God is no example of righteousness.  His views are clearly outside the laws of God and scripture warns that such shall be in danger of the judgment.

The bible speaks of a world empire that will be assembled (Dan 2: 31, 44) at the end of this age consisting of 10 subdivisions (horns). America, Canada, and Mexico make up one of these horns. America will be absorbed by this beast power arising out of Europe. This may be considered America's final warning because it's transgressions have reached its High Benefactor who will not continue to turn a blind eye to its child sacrifice and abominable social practices before destroying the nation.

"As I live, saith the Lord GOD, I have no pleasure in the death of the wicked; but that the wicked turn from his way and live: turn ye, turn ye from your evil ways..."

Leviticus 26:15, 16 & 25 chronicles the punishment that has already begun " And if ye shall despise my statutes, or if your soul abhor my judgments, so that ye will not do all my commandments, but that ye break my covenant: .. I also will do this unto you; I will even appoint over you terror, consumption, and the burning ague, that shall consume the eyes, and cause sorrow of heart....: and when ye are gathered together within your cities, I will send the pestilence among you.."

Terror came to America in Sept 2001 (911) and the pestilence began in 2020. These judgments will only get worse until America either turns back to righteousness or is destroyed with the remainder going into captivity.

If we are to survive then we must return to keeping God's laws to retain the manifold blessings since the nation's founding.

How it works, in detail: Who chooses the President of the United States? 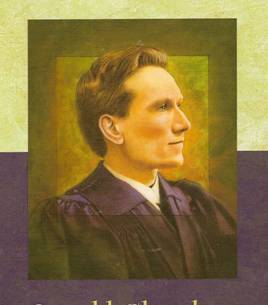 To be an Uncommon Believer….Let the “First Voice” You Hear in the Morning….Be the Voice of the LORD

"For by one offering he hath perfected for ever them that are sanctified." Hebrews 10:14

We trample the blood of the Son of God under foot if we think we are forgiven because we are sorry for our sins. The only explanation of the forgiveness of God and of the unfathomable depth of His forgetting is the Death of Jesus Christ. Our repentance is merely the outcome of our personal realization of the Atonement which He has worked out for us. "Christ Jesus . . . is made unto us wisdom, and righteousness, and sanctification, and redemption." When we realize that Christ is made all this to us, the boundless joy of God begins; wherever the joy of God is not present, the death sentence is at work.

It does not matter who or what we are, there is absolute reinstatement into God by the death of Jesus Christ and by no other way, not because Jesus Christ pleads, but because He died. It is not earned, but accepted. All the pleading which deliberately refuses to recognize the Cross is of no avail; it is battering at another door than the one which Jesus has opened. I don't want to come that way, it is too humiliating to be received as a sinner. "There is none other Name . . ." The apparent heartlessness of God is the expression of His real heart, there is boundless entrance in His way. "We have forgiveness through His blood." Identification with the death of Jesus Christ means identification with Him to the death of everything that never was in Him.

God is justified in saving bad men only as He makes them good. Our Lord does not pretend we are all right when we are all wrong. The Atonement is a propitiation whereby God through the death of Jesus makes an unholy man holy.

When we know the love of Christ, which passeth knowledge, it means we are free from anxiety, free from carefulness, so that, during the twenty-four hours of the day, we do what we ought to do all the time, with the strength of life bubbling up with real spontaneous joy.