”RBC is the 12th largest bank in the world based on market capitalization and the fifth largest in North America.”  Barron’s notes that RBC Wealth Management is looking to Grow having actively recruited a significant number of high profile investment managers over the last 8 years.

But all is not well in the RBC golden world of investment as RBC is charged with Negligence and Elder Abuse   If you have a few bucks to invest and you’re of retirement age then beware because the wealth management brokerages are going to milk you. What do you mean by that remark you might ask?   Well, older people are prime targets for abuse by investment firms because the money is there and ripe for the taking and seniors tend to be overly trusting.

We’re already seeing evidence of this in RBC’s late December 2017 User Agreement modification. RBC blocks you from viewing your own account unlessl you agree to their terms.

"IN ADDITION TO AND WITHOUT LIMITING THE FOREGOING, RBC CM SHALL NOT BE LIABLE FOR ANY HARM CAUSED BY THE TRANSMISSION, THROUGH THE PROGRAM, OF A COMPUTER VIRUS OR OTHER COMPUTER CODE OR PROGRAMMING DEVICE THAT MIGHT BE USED TO ACCESS, MODIFY, DELETE, DAMAGE, CORRUPT, DEACTIVATE, DISABLE, DISRUPT OR OTHERWISE IMPEDE IN ANY MANNER THE AVAILABILITY OF THE INFORMATION OR ANY OF YOUR SOFTWARE, HARDWARE, DATA OR PROPERTY."

This statement also removes liability from the transfer of erroneous information from ‘typos’ and other such glitches which may cost you money.

The White law Group reports: “According to The Financial Industry Regulatory Authority, an all-public FINRA arbitration panel has awarded $212,000 to the estate of a former RBC Wealth Management client who had charged the firm with negligence and elder abuse.

"The attorneys of the client, the late Hazel Kitzman, charged that RBC Wealth Management engaged in the unauthorized sale of shares in the client’s account and in the unauthorized transfer of funds from an account at another firm. The attorneys requested compensatory damages of at least $1.5 million, treble  punitive damages and reimbursement of all legal costs, all of which the FINRA panel denied.”

Remember that ‘unauthorized RBC broker activity’ because we’ll see that again shortly. Think this is just sour grapes or a few disgruntled clients? Well, take a look at a host of other complaints as RBC Wealth Management Reviews compiles complaints summed  up nicely by ‘RK’ back  in January of this year with ”..Money sucking leeches. No fiduciary responsibility. Will suck you dry with fees.”

Then there’s just the run of the mill abuse like a $140 yearly ‘account’ fee for not buying anything.  Remember interest rates are barely 3% and inflation is currently at 2.1%.  As a big or small investor you pay for not buying the financial investments a brokerage offers, even if you lose return on that investment.    The forced purchase of unwanted goods or services from corporations has become a global hallmark.  This policy causes older investors with smaller portfolios to purchase less desirable investments to keep their accounts from being pillaged by excessive and ruthless fees.

If you’re an elderly or a new retiree investor expect to be milked if you don’t know the ropes.  And, even if you do, the financial industry is structured such that there are no real penalties for fund mismanagement or cheating a client because the account holder must agree upfront to binding arbitration as a condition of getting an account

Outside a court of law the odds swing dramatically in favor of the brokerage, so do not count on FINRA for any real relief.  The centralized global banking system is designed to extract wealth from the general populace virtually at will simply by changing the prime rate.   Fees for any alleged services are just icing on the cake.

The recent HSBC LIBOR rate fixing scandal illustrates just how easily the banks can cheat people and the Federal Reserve System has demonstrated how well its QE releases can rob the nations’ citizens of their purchasing power.

These financial conglomerates own the various individual governments around the world and 20 trillion in debt buys a lot of favors.  Then there’s the annual revisions to Brokerage fee policies which can occur after you’ve committed significant resources to the firm.  Remember, whomever controls the money limits your options and ultimately controls you

Be sure and read the fine print in the RBC periodic account updates so you’re not surprised by the latest excursion into your back pocket.

Controlling the investor market is the key to successful brokerages because interest rates are rock bottom low in the public sector.  And, it’s risky for individuals to play the stock market or derivatives in today’s environment.  So offering investments priced slightly above what’s available at the trough guarantees a pool of people with above average financial strength.

Managing a brokerage account at RBC will tax your time as much as if you were actually a broker yourself,  from watching for mistakes in tabulated interest to your accounts to  buying financial instruments that you didn’t want  just to satisfy an order.  Here’s an example of what can happen, even if you watch, from last December as I purchased a financial instrument from BOFI federal through the brokerage:  “I did not authorize a purchase beyond the BOFI investment.  If an additional $2000 worth of BOFI was not available, you should have called me to ask if I wanted to buy something else offering the same terms.  Obviously, you didn't think it was worth asking me what I wanted to do with my own money.”

The RBC Broker’s reason for the snafu? Why a ‘typo’, what else? Note that elderly investors don’t have the time to make up losses from bad deals that their brokerage might recommend like zero coupon J.P. Morgan chase securities which can pay zero interest for months until the consumer price index increases.

If you have more than one brokerage account, then you must be prepared to buy something within the specified time frame for each account.  If you don’t buy regularly in a calendar year then you pay an ‘inactivity fee’ under the following conditions.

First, investment maturity doesn’t count. If you have an existing security and it matures then you get no credit  for reinvesting that principal with that brokerage.

Interest from other investments that pay into your brokerage account isn’t activity either, ‘activity’ is only new purchases that lead to the broker making a profit from your account.  So, why keep it there?  Because it will cost you another fee to close the account anywhere from $90.00 upwards.

Pursuant to the RBC  ‘user agreement’, I bought another financial  instrument in January 2018 with an end of the month settlement date to avoid the penalty ‘for not investing’.  Sounds like the Obamacare penalty, doesn’t it?

I received the RBC purchase confirmation in the mail.  But at the end of January the capital was still in my investment account so the purchase was in doubt as my agreement with the broker stipulated the money was to be transferred after the 26th of the month. I had to call the broker to discover that they had bought the instrument with their own money. Why?  This is highly irregular. I’ve never had securities bought on credit before without my knowledge and so this experience was of some concern given the wording of their user agreement:  “..until payment is made by you, securities purchases by you or held by us for your account will be or may be hypothecated comingled with securities for other clients. If payment or delivery is not made by the settlement date, we reserve the right without further notice to charge interest on the amount due shown on the face hereof..”

And despite what the brokerage may tell you, there is a good chance that an interest charge will appear on the next statement. Also, guess who will be keeping the interest on the investment until the funds are transferred? So, if you can buy something on credit without client approval, why not double my order as well and hold me liable?

Even RBC’s instrument purchase confirmations are full of additional clauses that work against the account holder.  And there’s no recourse provision in these clauses for RBC negligence when a buy order isn’t executed because the user agreement requires client agreement to binding arbitration instead of a court of law or you don’t get the account.  So to find out what additional fees may have been dumped on you in a given transaction, you must request an explanation in writing or you get nothing: “.this transaction may have incurred other fees..a complete breakdown of fees associated with the transaction  will be provided on your written request..”

In December,of this year I transferred my account to another broker using the RBC system. RBC like many large banks earns its money by gouging clients with outrageous fees as the loan industry is no where near as lucrative. And fees aren't subject to the same scrutiny as loan interest.

I was charged a $125 fee for transferring my holdings to another financial adviser even though the funds remain at RBC. Then I was charged an additional $45.79 for electronic transfer of my records to the other adviser within the same bank.  As RK aptly noted, they are 'money sucking leaches..' 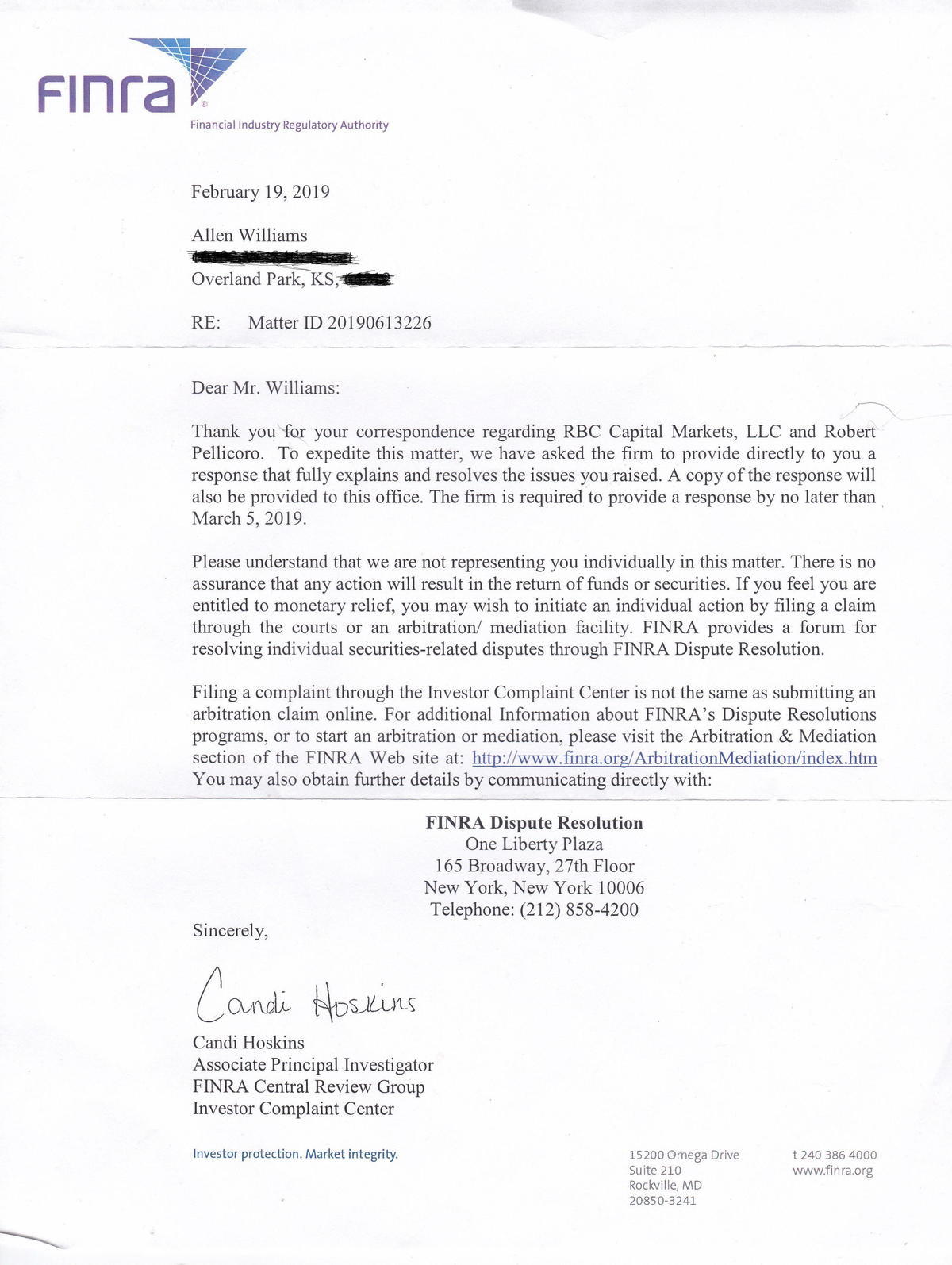 I discovered that RBC was holding the proceeds from one of my investments, $200 plus a $125 fee.

I immediately sent off a letter of protest to Warren Bischoff, the RBC Complex Director taking issue with the transfer charge on my investments moving within the same bank to another broker. After several weeks of non response from RBC, I wrote a letter of complaint in January of 2019 to both the Financial Industry Regulatory Authority (FINRA) and Comptroller of the Currency (as the latter regulates all foreign banks) to protest this outrageous fee. Shortly after getting my letter off to the regulating agencies, RBC reversed the fee.

After I had contacted FINRA, in early March of 2019 $325 dollars was refunded to my new brokerage account. To date I have not heard from Comptroller of the Currency as apparently this case did not fall under their jurisdiction.

If you’re looking for a place to invest, look well beyond RBC‘s client satisfaction hokum.