A starling revelation contradicting Dominion assertions of security and accuracy concerning the November 2020 election.  Both Dominion and the media's incessant disparaging of people who witnessed many extraordinary voting anomalies or those who outright challenged the election results. And Dominion definitely has inside help as Michigan Secretary of State, Joceyln Benson broke Michigan election law and reportedly has Chinese Connections

The following is excerpted from Lindell's lawsuit against Dominion as detailed on Frankspeech. It is not a counter suit. 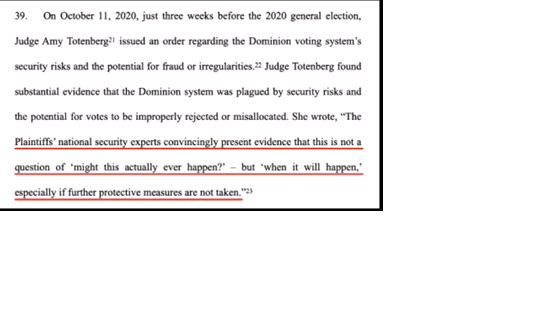 So we see from Lindell's lawsuit that a warning was issued Oct 11, 2020 by judge Amy Totenberg claiming an election security breach was not just a possibility, it was simply a matter of time before the Dominion system would be compromised.  So, why on earth would you use such a system unless you intended to steal an election? 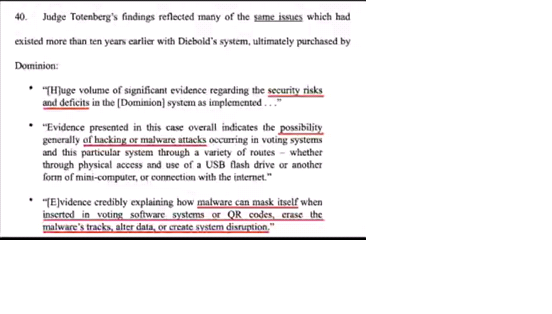 Forensic Expert Jeffrey Landberg's demonstration video of the ease by which Dominion voting machines can switch votes utilizing existing software and making no modifications to the voting machine. Watch the video here: https://www.depernolaw.com/uploads/b/27029178-466870070251105820/dominion-may-3-2021_272.mp4

We have the proof that voting machines used in the 2020 elections can be compromised and votes easily transferred from one candidate to another. We can flip votes at the tabulator/precinct level. We can flip votes at the county level. The American people are losing their voice for the future of our democracy. We must fight together for free and fair elections. Common allegations from Matt's amended complaint:

Matt states in the common allegations of his amended complaint that Dominion voting machines (tabulators) were shown to miscount votes cast for Donald Trump and instead count them for Presidential candidate Joe Biden.

40. It is an obvious fact that Presidential candidate Joe Biden received more votes than actually cast for him including an extra 2015 "phantom votes." But for Plaintiff contacting Jim Gurr, who contacted Defendant Guy's office, this mistake would not have been corrected.

62. The Dominion EMS that sits in the office of Antrim County includes a multitude of problems found within the system that amount to gross error by defendants. One of the most important discoveries is detailed on page 15 of the Cyber Ninja's report
{Exhibit 6], Here, Cyber Ninjas discovered a Microsoft SQL Server Management Studio implant on the system. This piece of software is not approved by the Election Assistance Commission ("EAC") and allows a user to actually circumvent security protocol and make "direct edit entries within the database" which "could potentially be utilized to change vote values."

63. Benjamin Cotton has also prepared an affidavit after review of the Antrim County system [Exhibit 7]. He states that he has reviewed the forensic image of Dominion system "utilized in the November 2020 election and discovered evidence of internet communications to a number of public and private IP addresses." One connection in particular traced back to "the Ministry of Education Computer Center 12F, No 106, Sec 2, Hoping E. Rd, Taipei, Taiwan 106."....Mr Cotton's findings show that the Antrim County system was connected to the internet. Of course, Sheryl Guy deleted system files that would allow further review.  For this reason, review of other systems in other counties is critical.

64.James Penrose also explains internet connectivity on both Dominion and ES&S machines [Exhibit 8]. The Dominion Systems proposal for Antrim County shows a quote for procurement of wireless transmission capabilities. Dominion representatives also confirmed performance issues with wireless transmission of vote totals and even went as far as disabling the saving of ballot images without explicit authorization during the 2020 primary. In addition a forensic examination of a Dominion ICX machine has shown the existence of Taiwan and Germany-based IP address in unallocated space, implying there were international communications via the internet. In addition, ES&S and DS200 machines in Michigan utilized 4G network
adapters for vote transmission over the commercial Verizon network. The company that manufactures the 4G wireless modems is named Telit. Telit has recently taken investment from a major Chinese firm and according to press reporting the UK government is monitoring the situation with the concern that the Chinese government is in a position to exercise influence over Telit.
The Dominion system, in conjunction with an elaborate technocracy, is positioned to circumvent the constitutional rights of each and every citizen, not only by muting the one person one vote criterion but actually predetermining the election winner by a consortium of unknown unaccountable persons for their own untoward goals and ambitions, in short such a system forever silences the will of the majority in any election. This is the same system used to take down Venezuela in just two years.

What Dominion appears to have is a trojan horse allowing an international cabal of players to 'fix' the outcomes of any local, state or federal election guaranteeing the 'win' of the candidate of their choice, all the while leaving the American voter under the illusion that heor she is participating in a democratic process jointly choosing those who will rule over them believing elections are secure and genuinely reflect the will of the voter.

Think about it, Any law overturning guaranteed rights or even amending the US contribution to limit individual rights could be enacted by a vote of the people under the Dominion system.  It is a diabolical and evil invention,if allowed to stand without challenge, electronic voting will guarantee the end of democracy as we know it and enslave all who embrace this totalitarian architecture.

Contact your representatives and demand they take action to deal with this fraud NOW! If your Senator or Representative tells you that there is no evidence of election fraud, THEN he or she is NOT representing you but an international cabal led by  those who hate America!!
Update 5/11/21:  Deperno Amended complaint charges straight up fraud against Michigan Secretary of State