We have often heard from evolutionists that those holding the view that life is a product of Intelligent Design are ‘Creobots’ or ‘ID’iots, as if there was nothing more than one’s emotions or a less evolved intellect in order to consider the possibility of design rather than natural selection.

Evolutionist, Richard Dawkins claims, that the ‘God delusion’ is behind the notion of design and purpose to mankind and its surroundings. Is this true? The field of mathematics is a highly structured and orderly application of human reason and logic, which did not evolve but was developed through incisive thought and mathematical tests.

The principles of mathematics developed through observation and the desire to quantify what was observed. It’s definitions, identities, and axioms define an absolute truth, which is unerring and undeviating, and is the basis that establishes the theorems of application. The foundation of Mathematics rests on logic and is a "deductive study of numbers, geometry and various abstract constructs". - Columbia Encyclopedia, 1991. So, how is the mental reasoning that allows truth to be discovered in the world of numbers, suddenly flawed when it comes to discovering the truth of an Intelligent Designer?

One evolutionist claims that "Real life is not binary, it uses real numbers (I’m not saying that binary numbers aren’t real, but that real life can use rational and irrational numbers). At the core, proofs in biology are not different from proofs in mathematics. "

Really? Well, then if real life can use irrational numbers to represent physical phenomena then it can equally utilize binary numbers, i.e. ‘0, 1’ to describe the state of certain life conditions. After all, what is life or death but a binary function? You’re either alive or dead, there isn’t any in-between. Now according to this evolutionist’s statement, if numbers in life forms can be shown to be real and part of a family, then that would constitute evidence for the existence of an Intelligent Designer as it would for the existence and validity of a mathematical theorem.

In Fermat’s Last Theorem, where equations of the form xn +yn = zn, have been shown to be irreducible and modular, therefore part of a family of elliptic curves. So, is there any biological evidence of some common mathematical relationship in living plants and animals? If not, then this would tend to support evolution’s notion of randomness in creating life but if so, then design is inferred.

An Italian mathematician by the name of Leonardo Fibonacci or more properly, Leonardo da Pisa brought the modern decimal numbering system to Europe in 1200 AD. His travels as a merchant throughout Algeria, Syria, Greece, etc., brought him into contact with the Arabian number or 10 based number system. He is best known for a simple mathematical series introduced in his publication, Liber Abaci, named as Fibonacci numbers in his honor. The series begins with zero and each successive number is the sum of the last two, i.e. 0 + 1 = 1 and 1 + 1 = 2, etc. 0, 1, 1, 2, 3 , 5 , 8, 13, 21, 34, 55 and so on defines the series.

A unique attribute of the series is that dividing a number by the preceding smaller one yields a ratio called the ‘golden mean’ or ‘divine number’, as it is called. It’s the ratio of the current number in the Fibonacci series, i.e. x(n+1) divided by the previous number x(n), i.e. 55/34 = 1.6176. This number series can be visualized as a group of boxes or rectangles as shown in Figure 1.

If we postulate that there exists an optimum ratio, i.e. height to width, which may be represented by the line segment above. We can pick an arbitrary point along the line to represent this optimum, called 'b', then: ab/bc = bc/ac

An optimum ratio is an ideal length relationship between line segments. Such a relationship might be expected to be more than simply an interesting intellectual exercise. The line segment ratio in our example is the length of bc to ab. Now if we set ab = 1 and let x represent the segment bc, we have:

The term (b/a) approaches a finite limit for the series as the Fibonacci ratio approaches infinity: 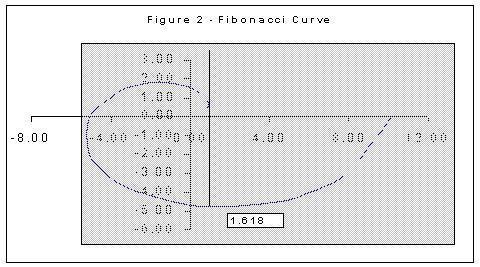 This length to width relationship produces what is referred to as the ‘golden rectangle.’ It occurs time and again throughout nature, in the human body, as well as the animal and plant world. Note its similarity to both the Fibonacci spiral and the seashell of Figures 5 & 6 respectively.

"Phideas, the Greek sculptor and many others in Greece and Egypt used this relationship in creating their works of art and architecture.

Furthermore the ratio and the golden spiral are ubiquitous throughout creation", so says Frederick A. Willson in "Ubiquity of the Divine" (Golden) Ratio and Fibonacci Numbers Throughout the Heavens and Earth." See also: http://plus.maths.org/issue3/fibonacci

Figure 3 shows the plot of progressive (b/a) calculations of the polar axes as determined from the polar series of Figure 2. Note that this series limit is the predicted 1.618, the same ratio as our line segment, 'a-c' above demonstrates. 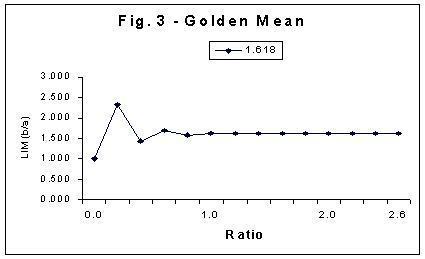 "The Golden Mean or Phi occurs frequently in nature and it may be that humans are genetically programmed to recognize the ratio as being pleasing. Studies of top fashion models revealed that their faces have an abundance of the 1.618 ratio." – Frederick A. Willson in "Ubiquity of the Divine." See: Fibonacci Numbers in nature

Human DNA exhibits this same divine number or golden mean. The double helix structure of DNA shown in Figure 4, measures 34 angstroms long by 21 angstroms wide for each full cycle. So, 34/21 = 1.619. The length between major and minor grooves, the blue and yellow line), exhibits this same 1.618 ideal ratio.

Francis Crick, the discoverer of the double helix structure of DNA has calculated the probability that such a complicated molecular string could have formed on its own as essentially zero. The biological code written into the human cell would fill 1,600 pages.

There is as much information in the cell as is contained in 600 encyclopedias. Cell mechanics are also extremely complex: "Life at the molecular level is composed of tiny machines…There are more machines inside the human body than all the combined factories of the world… There are 2 trillion chemical processes that take place in the human cell." - Michael Behe, ‘Darwin's Black Box’.

Genetics has shown that mankind is all ONE blood (Acts 17:26) requiring no more than a 0.012% variation in DNA to account for all the outward physical characteristics, including skin color.

It seems a stretch to the logical mind that evolution not only produces life by random acts of chance but has also produced it in an optimal aspect ratio of length to width, i.e. 1.618: 1. In one case, natural selection's chance combinations purportedly create life through confusion, while on the other hand, we have evidence of Intelligent Design as noted in I Corinthians 14:33, which states that "For God is not the author of confusion.."

Intelligent Design’s ‘Anthropic Principle’ suggests that there are a series of optimum constants necessary to support life, one of which is the spiral galaxy. There are three basic galactic forms, elliptical, irregular and spiral. However, only spiral galaxies have a near round orbit capable of supporting life. 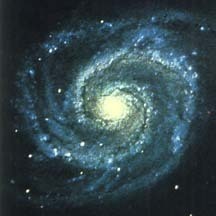 Many plants exhibit the Fibonacci series in petals, leaves, sections and seeds: http://goldennumber.net/plants.htm Fibonacci numbers are also found in living organisms including the cochlea of the human ear: http://www.world-mysteries.com/sci_17.htm 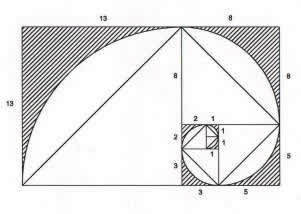 Using the blocks of Figure 1, we may construct an idealized spiral by drawing a series of lines through the diagonals of each of the Fibonacci squares and then connecting them with a series of smooth curves or chords as shown in Figure 5.

The resulting figure looks remarkably like the Nautilus seashell of Figure 7. 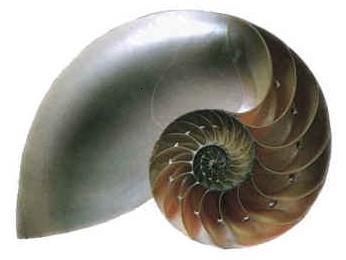 Matter, Chance and Time are the trinity of evolution. And so, unique mathematical relationships conflict with material science’s assertion that there are no absolute truths. The fact that a unique aspect ratio is so pervasive through out nature is strong evidence of intentional design rather than chance combinations in matter as evolutionist’s have asserted.