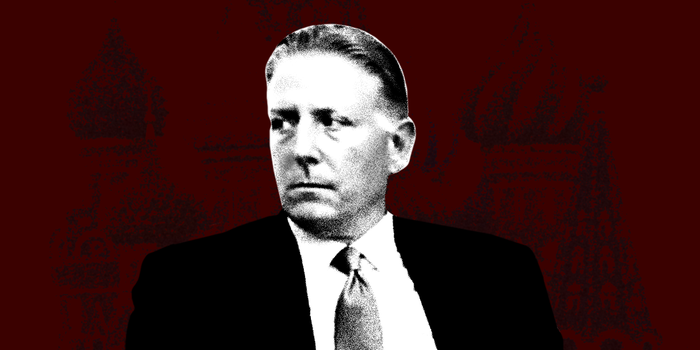 A federal grand jury subpoenaed records of any "payments or gifts" that Charles McGonigal, the FBI's former head of counterintelligence in New York, received from foreign governments. Foreign Policy Association; iStock; Rebecca Zisser/Insider
A former high-level FBI agent who was involved in the investigation into the Trump campaign's contacts with Russia during the 2016 election has himself come under scrutiny by federal prosecutors for his ties with Russia and other foreign governments.

Late last year, according to internal court documents obtained by Insider, US attorneys secretly convened a grand jury that examined the conduct of Charles McGonigal, the former head of counterintelligence at the FBI field office in New York City. The Justice Department declined to comment on what the grand jury was investigating or whether it remained ongoing. But a witness subpoena obtained by Insider seems to indicate that the government, in part, was looking into McGonigal's business dealings with a top aide to Oleg Deripaska, the billionaire Russian oligarch who was at the center of allegations that Russia colluded with the Trump campaign to interfere in the 2016 election.

The subpoena, issued in November, requests records relating to McGonigal and a shadowy consulting firm called Spectrum Risk Solutions. A week after the subpoena was issued, a Soviet-born immigrant named Sergey Shestakov said in a separate filing that McGonigal had helped him "facilitate" an introduction between Spectrum and Deripaska's aide. The filing also states that McGonigal helped introduce the aide to Kobre & Kim, a New York law firm that specializes in representing clients who are being investigated on suspicion of "fraud and misconduct." Shestakov, who has been identified on TV panels as a former Soviet foreign ministry official and former chief of staff to the Soviet ambassador to the United Nations, reported receiving $33,000 for the referrals.

While it wouldn't necessarily have been illegal for McGonigal to work on behalf of Deripaska, failing to disclose activities covered by the Foreign Agents Registration Act, such as lobbying and public relations, is punishable by a $250,000 fine and up to five years in prison. Deripaska was sanctioned by the Treasury Department in 2018 for acting as an agent for the Kremlin, and has been accused of ordering the murder of a businessman. "If McGonigal is mixed up in any way shape or form with Deripaska, that strikes me as unseemly, to put it politely," says Tim Weiner, the author of "Enemies: A History of the FBI." 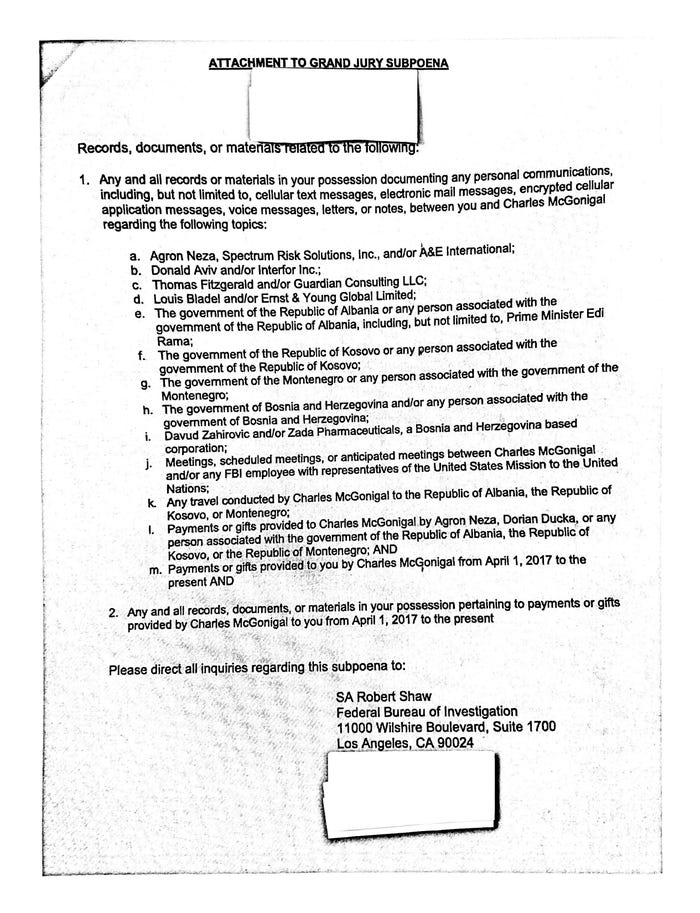 A witness subpoena obtained by Insider indicates information that federal prosecutors were seeking about former FBI official Charles McGonigal. Insider
Neither McGonigal nor those he is cited as dealing with responded to requests for comment from Insider. "This is not an area where we can provide a statement at this time," a representative for Kobre & Kim said.

It is not clear whether McGonigal is a target of the grand-jury investigation, or simply a subject whose activities are somehow related to it. And there is nothing in the court documents or elsewhere to suggest that McGonigal behaved inappropriately during the FBI's investigation of the Trump campaign. But the materials requested in the witness subpoena raise questions about whether a top FBI agent may have been tapping the connections he made during his years of public service for private gain — an all-too-common practice among Washington insiders. And whatever McGonigal's actions, the fact that he has been swept up in a grand-jury investigation is highly unusual. According to a former senior official at the Justice Department who asked not to be identified, prosecutors almost never consider charges against someone so high up in the FBI. "It's very rare that former FBI people at all, and certainly former senior FBI people, wind up as grand-jury targets," the official said.

The federal scrutiny of McGonigal is especially striking given his work at the FBI. Before his retirement in 2018, McGonigal led the WikiLeaks investigation into Chelsea Manning, busted Bill Clinton's national security advisor Sandy Berger for removing classified material from a National Archives reading room, and led the search for a Chinese mole inside the CIA. In 2016, when reports surfaced that Russia had hacked the email system of the Democratic National Committee, McGonigal was serving as chief of the cybercrimes section at FBI headquarters in Washington. In that capacity, he was one of the first officials to learn that a Trump campaign official had bragged that the Russians had dirt on Hillary Clinton, sparking the investigation known as Operation Crossfire Hurricane. Later that year, FBI Director James Comey promoted McGonigal to oversee counterintelligence operations in New York.

According to the witness subpoena, prosecutors are also looking into whether McGonigal has ties to the government of Bosnia and Herzegovina, as well as any "payments or gifts" he was provided by the governments of Kosovo, Montenegro, and Albania. 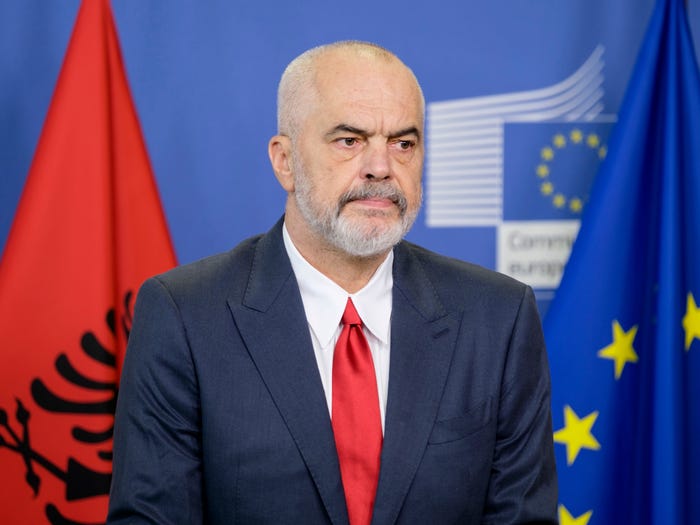 Two sources told Insider that McGonigal was close to Edi Rama, who has served as the prime minister of Albania since 2013. According to an email reviewed by Insider, McGonigal used his official FBI email account to try to arrange a meeting between Rama and an American firm the prime minister was thinking about hiring for an anti-corruption initiative. In the end, the FBI didn't give McGonigal approval for the meeting, and it never took place.

A representative for Rama said the prime minister's relationship with McGonigal was "a totally private friendly relationship of no public interest. We have no idea about any grand jury and no US authority has ever contacted us about it. There have never been meetings with firms, gifts, payments, travel reimbursements before or after Mr. McGonigal left his job."

Since he left the FBI, McGonigal has continued to trade on his expertise in counterintelligence. In 2020, months after his reported assistance to Deripaska's aide, he appeared on a panel at the Atlantic Council, where he condemned the corruption of Russia's security services. "You are seeing an erosion in any rule of law as it relates to the FSB," he said. "It would be akin to having in the United States the FBI as a rogue element, operating at the behest of the highest bidder."

McGonigal's profile on LinkedIn says he is the senior vice president of "global security and life safety" at Brookfield Properties, a multibillion-dollar real-estate company in New York. But that information, apparently, is inaccurate. "Charlie McGonigal is no

longer with Brookfield," Andrew Brent, Brookfield's head of communications, told Insider. McGonigal left the company, he added, in early January — just as witnesses were scheduled to appear before the grand jury.

Mattathias Schwartz is a senior correspondent at Insider.