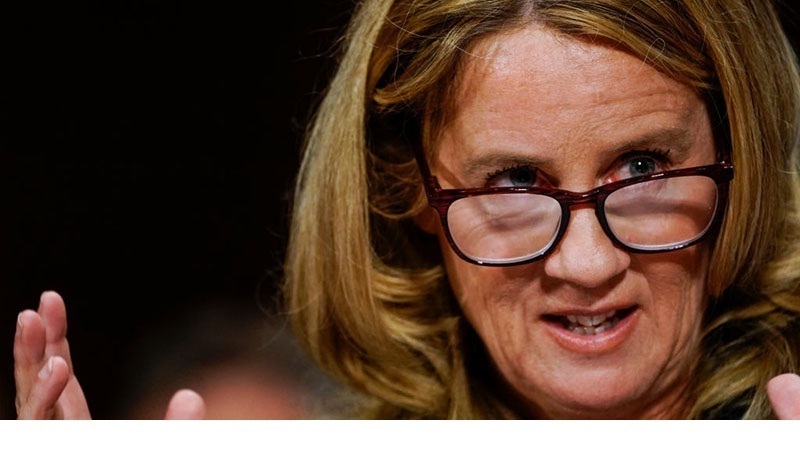 In another stunning bombshell about the hoax accusations against Brett Kavanaugh, we’ve now learned and confirmed
that Christine Blasey Ford co-authored a science paper that involves her carrying out mass “hypnotic inductions” of psychiatric subjects as part of a mind control program that cites methods to “create artificial situations.”

Internet sleuths are turning up an extraordinary collection of evidence that increasingly points to Christine Blasey Ford being involved in mind control programs at Stanford, which some claim are run by the CIA. We have confirmed that Stanford University, where Ford works, runs a “CIA undergraduate internship program” which is described in full at this Stanford.edu recruitment page for the CIA. The Stanford recruitment page for the CIA explains, “You will be given the opportunity to work with highly-skilled professionals and see first-hand the role the CIA plays in supporting US officials who make our country’s foreign policy.”

We can also now confirm that Ford is listed as a co-author of a study that carried out mass hypnosis and mind control on psychiatric subjects under the banner of “psychoeducation,” covered in more detail below.

A university professor named Margot Cleveland first tweeted the discovery, which is now spreading rapidly across the ‘net:

BREAKING: This is HUGE (waiting for permission to h/t): One of Christine Ford Blasey's research articles in 2008 included a study in which participants were TAUGHT SELF-HYPNOSIS & noted hypnosis is used to retrieve important memories "AND CREATE ARTIFICAL SITUATIONS." pic.twitter.com/11n1JVnArM

The study was published in the Journal of Clinical Psychology. The study title, abstract and authors can be confirmed at this link.

Interestingly, the study was funded by the Mental Insight Foundation (see detailed financial records, below) and was overseen by Dr. Lisa Butler of the Department of Psychiatry and Behavioral Sciences at the Stanford University School of Medicine. You can confirm these facts at this link.

The full text of the research paper describes methods to “create artificial situations.” Here’s some of the actual language from the paper, which can be viewed in full at this link from Academia.edu.

…assist in the retrieval of important memories,and create artificial situations that would permit the client to express ego-dystonic emotions in a safe manner.

[Subjects] were given the Hypnotic Induction Profile (HIP; H. Spiegel & Spiegel, 2004) to evaluate their level of hypnotizability and were asked to complete a baseline packet of psychosocial questionnaires assessing life events, general functioning, satisfaction with life, and aspects of mood (including symptom levels), personality, health, social support, traumatic experience, and spirituality.

Therapist-led groups met once a week in the Department of Psychiatry and Behavioral Sciences at Stanford University School of Medicine to participate in an intervention that included either meditation and yoga exercises or group therapy with formal hypnotic inductions.

From this published paper, co-authored by Christine Blasey Ford, we know she is intimately familiar with mass hypnosis, self-hypnosis and mind alteration processes, all of which are being deployed in this staged “false flag” assault on Brett Kavanaugh. Through carefully crafted leaks, cover-ups and media narratives, almost half the nation has already been mass hypnotized into believing that an innocent man is a deranged serial rapist. Such is the power of CIA mind control, deployed on a nationwide scale. (It also underscores the realization that the entire purpose of the establishment media is not to inform people but to influence minds.)

If you venture even deeper down this rabbit hole, you find that the same Mental Insight Foundation that funded the mass hypnosis / mind control study on which Christine Ford work also helped fund another study called “Interoception and Mental Health: A Roadmap.”

This study, completed in June of this year (2018), is available at this ScienceDirect link.

The abstract for this study describes the key focus of the research:

Interoception refers to the process by which the nervous system senses, interprets, and integrates signals originating from within the body, providing a moment-by-moment mapping of the body’s internal landscape across conscious and unconscious levels.

In essence, this research seeks to find ways to control the mind through biological interventions by exploiting the “roadmap” of biology / neuro links. When the full map of how the mind interprets internal biological is understood, it allows a kind of reverse engineering of the mind through interventions in the human subject. If this sounds familiar, recall the recent revelations about the projections of inner voices through sub-audible frequencies that can essentially “plant” voices or even emotional moods into the minds of targeted subjects.

It is well known that U.S. embassy workers in Cuba were recently attacked by secret “sonic weapons” that were widely reported in the media. As The Guardian reports, the level of mind control achieved through such biological interventions can cause targeted subjects to be unable to recall specific words that would otherwise be in their vocabulary. The Guardian says:

At least some of the incidents were confined to certain rooms with laser-like specificity, and some victims now have problems recalling specific words…

The blaring, grinding noise jolted the American diplomat from his bed in a Havana hotel. He moved just a few feet, and there was silence. He climbed back into bed. Inexplicably, the agonizing sound hit him again. It was as if he’d walked through some invisible wall cutting straight through his room.

Soon came the hearing loss, and the speech problems, symptoms both similar and altogether different from others among at least 21 US victims in an astonishing international mystery still unfolding in Cuba.

Some felt vibrations, and heard sounds – loud ringing or a high-pitch chirping similar to crickets or cicadas.

Other symptoms have included brain swelling, dizziness, nausea, severe headaches, balance problems and tinnitus, or prolonged ringing in the ears.

Getting back to Christine Blasey Ford’s work on interoception / neuroimaging, the paper funded by the Mental Insight Foundation openly admits that the neuroimaging “roadmap” can alter decisions, behavior and even consciousness. It explains, “Recent years have witnessed a surge of interest on the topic of interoception due in part to findings highlighting its integral role in emotional experience, self-regulation, decision making, and consciousness. Importantly, interoception is not limited to conscious perception or even unique to the human species.”

Some other interesting text from the study: 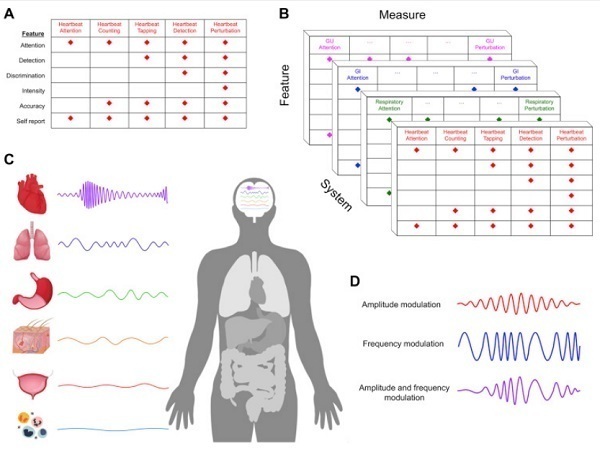 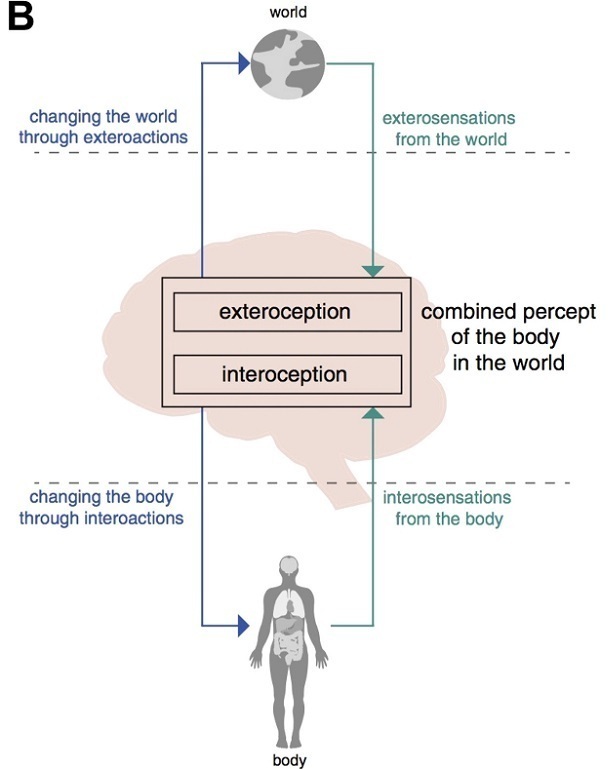 The study openly discusses altering behavior and beliefs through the application of neurotechnology “inference-control loops” that “hijack” human anatomy to control minds. In essence, they are modeling the neurology of a human being in terms of firmware / software / hardware, then hacking the system to install their own desired beliefs and behaviors. They even call it “computational psychosomatics,” and they talk about using torture techniques to force the neurological maps out into the open, saying, “the degree of tolerance to being enclosed in a small dark chamber for 10 minutes might provide behavioral evidence verifying tolerance to triggers of interoceptive dysregulation.”

In the language of the science authors:

We are not alleging any nefarious, unethical or illegal activities on the part of the Mental Insight Foundation. However, to help other internet researchers follow the many leads now uncovered in all this, we’re publishing public information about this foundation that’s readily available in online public tax documents.

That address is the exact same address listed by Virginia Hubbell Associates, a small firm that says it offers “consulting services for family foundations.” Its client list, found here, includes not only the Mental Insight Foundation but also:

Most of the clients appear to be genuinely helpful organizations for society, but they’re probably worth a second look from internet researchers. Notably, the Levi Strauss company recently came out in favor of destroying the Second Amendment by pushing gun control.

What’s especially interesting is that Virginia Hubbell Associates was paid $341,375 in just one year for “foundation management” services, according to this form 990-PF for 2015. 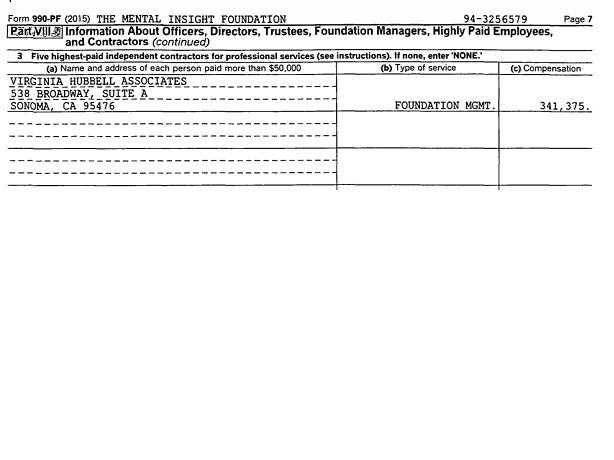 “Statement 11” of the document lists the officers, directors, trustees and key employees of the Mental Insight Foundation. Notably, they are all paid nothing except for the treasurer. In other words, most of the directors are paid nothing, but the management consultant is paid $341K. We are not alleging any unscrupulous activities among these individuals. They are public officers of a public foundation, listed in a public document. These individuals are:

If you’re noticing a lot of “Kimpton” names in this list, that’s probably because one of the primary sources of income for the Mental Insight Foundation is the Kimpton Hotel Group, LLC, which generated $2.3 million in revenue for the foundation in 2015. There’s nothing illegal about that. It’s just an interesting note.

The foundation donated money to the following groups. We’re not alleging anything nefarious in this list, by the way. Rather, these are leads for other internet researchers to follow. Many of the groups this foundation donates to appear to be related to offering support for veterans, the homeless and integrative medicine:

More research under way… check back for more stories each morning and evening.

Is The FBI Investigation A Set Up Of Judge Kavanaugh