What is with Michigan government?

Here is the actual PDF file from the Allied Security Operations Group in the court sanctioned audit of Dominion in Antrim county.
Is this fraud just limited to Michigan? I think not.

By Wendi Strauch Mahoney
The judge in the Antrim County lawsuit says he will not allow discovery entered late in the game, saying “discovery is closed.” Previously, DePerno had requested discovery to expand to other counties but, on Monday, DePerno requested an expansion to other townships within Antrim County. The judge stated that “the court rules require us to move precipitously…and I advised attorneys at the beginning” of that expeditious timeline. The hearing can be viewed here.
Matthew S. DePerno, Esq. @mdeperno
We have discovered the actual fraud and subversion in the Antrim County election. Did it occur statewide? May 10 docs: https://depernolaw.com/bailey-documents---may-2021.html 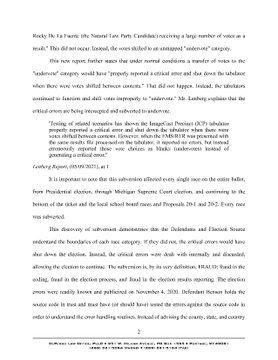