Posts tagged with
A mystery that will likely never be solved.  Looking back on all the murders committed leading up to, during and after the Clinton Years leaves one to wonder, just exactly who or what is the driving force. Who, or perhaps ‘what’ can have that much power and influence to make it happen. They control police investigations, political incidents that make Treason look like J-walking, and no one is ‘EVER’ caught. NEVER.

I have to wonder, it’s obvious that the Clintons are puppets with many string pullers, not just Soros. Is Soros a puppet as well?   Islamic Marxist Obama is absolutely a puppet with a totally fabricated past. From his days with the PLO to a marriage arranged by Valerie Jarrett to make him marketable to the death of the only two, for lack of a better word, homosexual  lovers that came forward to the present day, his climb to power is kept in the shadows. Who recruits these puppets, grooms them, protects them?

I don’t think those answers will ever be revealed, but who or what ever holds the reins is one powerful uncontrolled power to be feared . 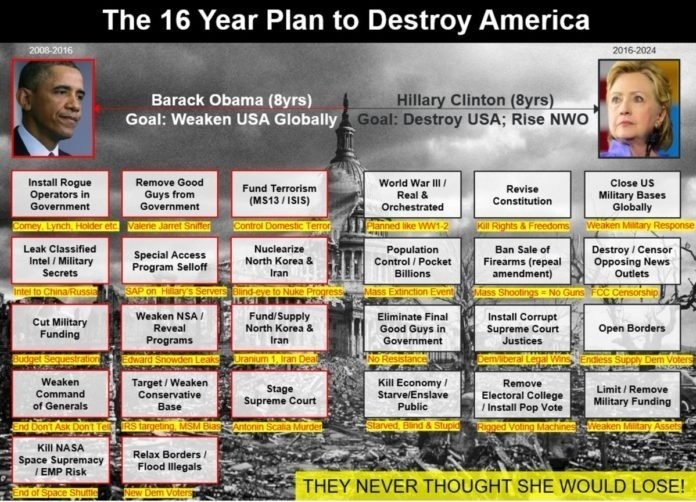 {A 2014 article with a disturbing message, truth is subservient to an ideological agenda - ED}

The Green Party of England and Wales has called for a purge of government advisers and ministers who do not share its views on climate change. Published 14 February of 2014.

Any senior adviser refusing to accept “the scientific consensus on climate change” should be sacked, it said.

Party leader Natalie Bennett said the rule must apply to all senior advisers, including those with no responsibility for environmental issues.

Speaking recently, the prime minister said that while a single weather pattern could not be attributed to climate change, many scientists were talking of a link between the two and the UK should be prepared for more extreme weather.

But some Tory MPs and peers, Lord Lawson being the most prominent, have cast doubt on scientific theories on climate change which argue human activity is predominately responsible for recent rises in global temperatures.

The Greens are now insisting the government gets rid of any cabinet minister who takes a different view on climate change.

Ms Bennett said: "We need the whole government behind this. This is an emergency situation we're facing now. We need to take action. We need everyone signed up behind that."  Pressed on the issue, she agreed that even the chief veterinary officer should be removed if he didn't sign up to the view on climate change also taken by the Green Party.

A policy document released by the party said: "Get rid of any cabinet ministers or senior governmental advisers who refuse to accept the scientific consensus on climate change or who won't take the risks to the UK seriously."

Ms Bennett added: "It's an insult to flood victims that we have an Environment Secretary (Owen Paterson) who is a denier of the reality of climate change and we also can't have anyone in the cabinet who is denying the realities that we're facing with climate change."

She said her party took the consensus view shared by many other organisations including the Intergovernmental Panel on Climate Change.

In September, the UN-backed body said it was 95% certain that humans were the "dominant cause" of global warming since the 1950s.

The party also wants to see staff cuts at the Environment Agency reversed, a bigger budget for the Agency and tougher rules to prevent development on flood plains.

It says money spent supporting fossil fuels should be redirected to help victims of flooding.


Will it be Hillary Clinton or Donald Trump? Several "protest candidates" have sprouted up which usually indicates they don’t have enough money, or they’re in it to try to upset the election results. As a former member of The Spectrum & Daily News
’ Writer’s Group for six years, I prognosticated about the country’s future under an unqualified Barack Obama. His dynamic speeches inspired the nation, but failed to ignite a fire under him. Predictably, his two terms as president doubled our debt and welfare enrollment, sent race relations back to pre-MLK, while his naive "lead-from-behind" foreign policy became a joke to our enemies, and a death knell to our allies. Nice job.
As if his tenure wasn’t destructive enough, Obama highly recommended Hillary Clinton as his successor. Hillary is an unscrupulous politician who has made a fortune on the backs of the taxpayers. As Bill Clinton’s "point woman" during the scandals that plagued them in Arkansas, she skillfully managed to keep him a few steps ahead of the hangman. Her public life (and Bill’s) has been one shameful scandal after another with recent breaches in national security, "pay for play" implications between foreign governments and the State Department, while lying to Congress. Her investment outcomes have been "miraculous," while record books and sometimes "Arkansas bodies" disappeared just like in an old B-movie mystery.
The difference is the Clinton who-doneit never ends ... and they’re never solved. Whitewater, File Gate, Travel Gate, Bi! ll’s impeachment and trial, a fistful of sexual assaults, Monica, Vince Foster, or why they were gifted a million-dollar New York home by none other than the current governor of Virginia. Then there’s the current FBI and IRS investigations into the Clinton Foundation. Move over Bonnie and Clyde. Donald Trump is not a politician but a businessman who turned his father’s $10 million dollar real estate company into a $10 billion empire. In his ascent, he honed his business skills alongside other powerful moguls like Helmsley, Blau, and Bloomberg, et al., not to mention savvy foreign investors from China, Russia and Japan. He has keen management skills and is a top-notch negotiator.
Like him or not, Trump will re-establish America’s financial and production superiority to regain worldwide trade advantages. He’s a staunch supporter of law ! enforcement and is committed to modernize the military. He’ll allow companies with trillions offshore to repatriate that money with minimal penalties as long as the money remains in the U.S., to help pay for infrastructure investments and tax cuts across the board. His leadership and motivational skills will inspire Congress to reach impossible goals with precision, on time, and unlike before, under budget. For these reasons, regardless of his political missteps so far, I believe he’ll lead our nation from political correctness into an era of "Americanism." Most media outlets in their liberal bias criticize Trump for his gaffes and inexperience at campaigning, but admit he’s not a liar or a thief. He’s someone who will get much done, won’t speak in platitudes, and vehemently protect and defend the Constitution of United States, while never placing himself above the welfare and safety of this nation.

Could you make the same claim about Hillary Cl! inton? Rich Panessa is a resident of St. George. Dr. Christine Blasey Ford’s bombshell sexual assault allegations against Supreme Court nominee Brett Kavanaugh have taken yet another turn after the last named witness came forward with what they knew.

Based on what the witness had to say, the current narrative doesn’t bode particularly well for Ford.

Leland Ingham Keyser, the last named witness, is also “a longtime friend of Ford” according to CNN.

CNN had learned that Republican staffers were attempting to interview anyone who could contribute information regarding the alleged incident. Keyser, by being a named witness, was an obvious choice to ask.

“Simply put, Ms. Keyser does not know Mr. Kavanaugh and she has no recollection of ever being at a party or gathering where he was present, with, or without, Dr. Ford,” Walsh said.

“It’s not surprising that Ms. Keyser has no recollection of the evening as they did not discuss it,” Katz said in a statement. “It’s also unremarkable that Ms. Keyser does not remember attending a specific gathering 30 years ago at which nothing of consequence happened to her. Dr. Ford, of course, will never forget this gathering because of what happened to her there.”

Despite the explanation from Katz, this is still a notable blow against Ford’s accusations, especially considering what the other named witnesses had to say about the alleged incident.

Will Democrats be successful in derailing Brett Kavanaugh's confirmation to the Supreme Court?

Completing this poll entitles you to Conservative Tribune news updates free of charge. You may opt out at anytime. You also agree to our Privacy Policy and Terms of Use.

First and foremost, Kavanaugh has vociferously denied the allegations.

“This is a completely and totally false allegation,” Kavanaugh said when the accusations first surfaced. “I have never done anything like what the accuser describes — to her or to anyone.”

Besides Kavanaugh and Keyser, Mark Judge and Patrick J. Smith were also named as witnesses. Their statements reflect Keyser’s.

“I have no memory of this alleged incident,” said Mark Judge in a letter sent to the Senate Judiciary Committee.

Smith issued an even stronger statement than his other named witnesses.

“I understand that I have been identified by Dr. Christine Blasey Ford as the person she remembers as ‘PJ’ who supposedly was present at the party she described in her statements to the Washington Post,” Smyth said in his statement. “I am issuing this statement today to make it clear to all involved that I have no knowledge of the party in question; nor do I have any knowledge of the allegations of improper conduct she has leveled against Brett Kavanaugh.”

Smyth then went on to defend Kavanaugh.

“Personally speaking, I have known Brett Kavanaugh since high school and I know him to be a person of great integrity, a great friend, and I have never witnessed any improper conduct by Brett Kavanaugh toward women. To safeguard my own privacy and anonymity, I respectfully request that the Committee accept this statement in response to any inquiry the Committee may have.”

For the record, every named witness in Ford’s accusations has now categorically denied ever attending such a party or witnessing sexual assault.

Whether your believe Ford or not, you can’t deny that these latest developments do not bode well for her claims.