Posts tagged with
by Adam Wilson

Yesterday, at least 29 people were injured in a mass shooting on a New York subway.  The shooter threw down smoke bombs and then began opening fire on commuters at roughly 8:30AM Tuesday morning.  A manhunt began for the shooter yesterday.

Last night, police identified a person of interest in the shooting who has complained about the city’s poor mental health services and who has espoused far-left views on social media.  His social media posts include anti-white rants that discuss the inevitably of a race war, posts glorifying violence, and anti-semitic viewpoints.

The person of interest was identified as 62-year-old Frank James. The FBI has already confirmed that it was monitoring James after his inflammatory social media posts.  [This is a laugh.. FBI 'monitoring' is only concerned with whether or not the surveiled are acting according to the narrative they are pushing. - ED]

In a number of recent shootings, the FBI has admitted that they were monitoring the suspect before the attack happened, leading many to question why they didn’t take action to prevent the attack before it happened.

Today, Arizona Senatorial candidate Blake Masters pointed out the FBI’s misdirected priorities.  While the FBI was busy creating terrorist plots of out thin air, they missed an actual mass shooting that has already left dozens injured, he said.

The NY subway shooter went on YouTube rants against white people and was a black supremacist… so that’ll be the last we hear about it! He was known to the FBI, but FBI was too busy kidnapping the Michigan governor.pic.twitter.com/LFXCCAbQmh

Despite opposition from local “transgender” activists and state school counselors group – who are against parents “interfering”! 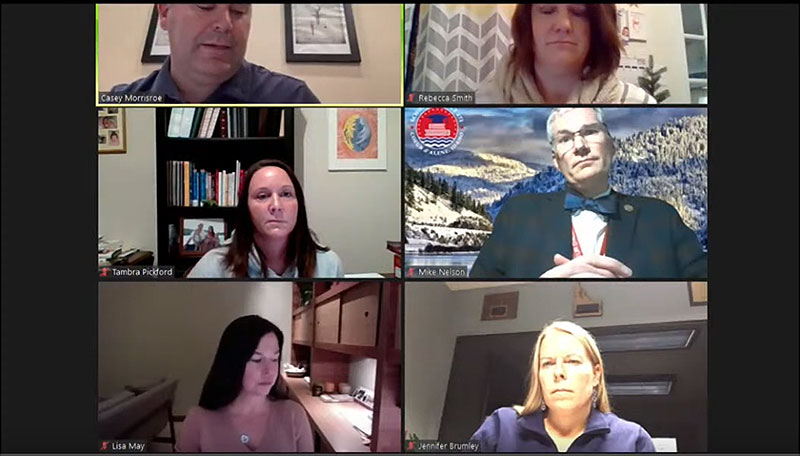 Within days of our report on the outrageous incident, the problem was brought up at the local School Board meeting.
t’s one of the most horrific things that’s been happening in elementary and middle schools. A child will come to a pro-LGBT school guidance counselor with some social or emotional issue. The counselor will persuade the child that the real problem is that he or she is “gay” or “transgender.” But the parents must not be informed about their conversations, the child is told.

By the time the parents find out, an enormous amount of psychological damage has been done to the child. We’ve seen this scenario over and over. MassResistance is dedicated to stopping this.

In November 2020, a family in Coeur d’Alene, Idaho contacted MassResistance describing how their 11-year-old girl had decided she’s a “transsexual” after talking with her elementary school counselor. When the family finally heard about this, the girl said that her school counselor and elementary school teacher both completely supported “her decision.” The girl insisted that it’s “who she is” and that the school people both told her, "I will accept you for who you are."

The school district had not reported any of this to the parents as it was developing. Instead of being directed to her family, the girl was given the phone numbers of local LGBT support groups.

Big uproar across the state

After our report, the incident caused considerable uproar in the Coeur d’Alene area and throughout the state.

National conservative media, including The Daily Citizen and The Federalist, ran stories on it.

The local liberal newspaper attempted to “correct” MassResistance’s reporting with statements from the elementary school, an LGBT group, and a pro-LGBT “human rights” group. They claimed that the counselor was actually helping the 11-year-old. The fringe LGBT movement also weighed in, bashing MassResistance. Our reporting apparently struck a nerve!

Two months after the incident, on January 23, 2021, the Idaho LGBT movement organized an “LGBTQ+ Youth Rally” at a local park to show support for the elementary school counselor who had helped the 11-year-old girl with her “transition.” According to the news report, the rally was also meant to counter the MassResistance report and resulting “homophobia” in the community. Clearly, a big reason was to intimidate anyone who might speak out. 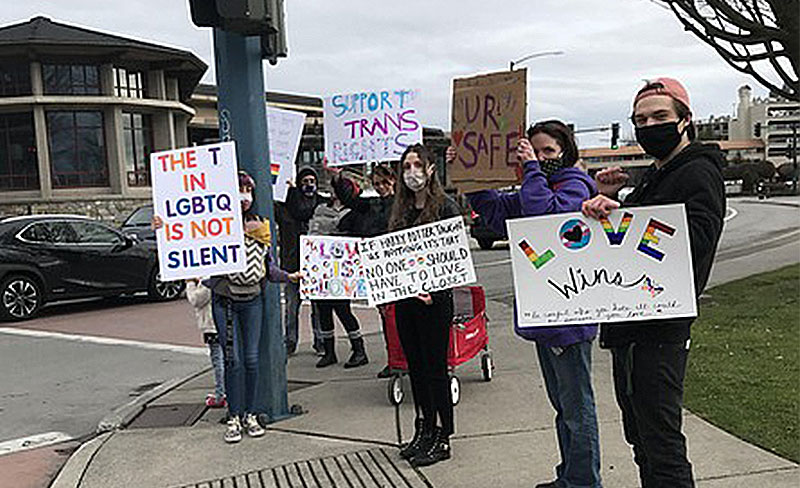 LGBT activists tried to intimidate parents in the community from speaking out. But it didn't work. [Photo: Coeur d'Alene Post Falls Press]

But among regular people, there was growing outrage over such clear abuse of young children – and a strong belief that something must be done. Idaho MassResistance began mobilizing local parents and others who refused to be intimidated by the LGBT tactics.

Parents started holding protests outside the school district’s main office in Coeur d’Alene. They began attending the local School Board meetings in larger numbers. The School Board basically reflected the conservative leanings of the area, and as a group agreed that some change needed to be made. The parents’ show of force gave them the courage to move forward in the face of the LGBT movement, the unions, and the leftist education lobby.

Many parents remember when school counselors mainly provided academic counseling and helped with post-secondary and career goals. But in recent years they have taken on mental health and psychological issues, largely in collusion with the LGBT movement and other special-interest groups. (See, for example, this policy statement from the American School Counselor Association.) This is what the Idaho MassResistance parents are up against.

At the January 4, 2021 meeting of the the Coeur d'Alene School Board - less than two weeks after our MassResistance report - the Board members reacted to the flood of emails they had received and agreed that they needed to explore what to do about the situation.

In March 2021, the School Board initiated an effort to change the district policy regarding school counselors. The Idaho MassResistance parents continued to push for strong protections, against the hesitations of some board members.

The new policy was drafted by a committee which included a School Committee member, two parents (not part of our group), an administrator, and three school counselors.

In October 2021, the new proposed policy language was released to the public for consideration. The draft still contained troubling language. Idaho MassResistance presented these critiques to the School Board members:

Nevertheless, in February 2022, the school board formally approved the new policy. It’s not everything that we wanted. But it definitely is a shot across the bow – a strong warning to the school counselors in that city – to absolutely stop what they’ve been doing to children. Parents feel that MassResistance has helped them achieve a victory.

The Idaho School Boards Association jumps into the fight

When the Coeur d’Alene School Board released its proposed policy, the education establishment apparently got the message that they needed to quash this “anti-counselor” movement before it got any more momentum.

The resolution directs the ISBA lobbyists:

“to work with the legislature to amend existing statute to allow school districts more flexibility in addressing the mental, social, and emotional needs of students …”

In other words, they want to write new state laws to keep parents from interfering with any secret LGBT counseling of children.

So far, the ISBA hasen’t moved forward by drafting a bill. But the group’s lobbying did impact what was to happen next in the legislature.

The State Legislature also gets involved


The outrage over the Coeur d’Alene issue even reached the State Legislature. In mid-February, an Idaho State Representative asked MassResistance for help in drafting a bill to protect children from this abuse. We submitted the following, which she moved forward with:

But as soon as word got out about this new bill, the ISBA and state school counselors association heatedly approached the House leadership. They made absurd and insulting claims that if parents are told about their childrens’ homosexual or transgender “decisions,” the children will commit suicide. Floating this myth is unfortunately a common tactic used by the LGBT movement, though it goes against all responsible psychological understanding and practice. But the legislative leaders fell for it and immediately killed the proposed bill.

Since the legislative session was winding down, we will wait until next year and refile then. We’re not stopping.

In the beginning, nobody believed that the Coeur d’Alene School Board would actually change anything. Even though it’s a conservative area, the Board members weren’t looking to make any waves on this hot-button issue. The policy changes were a direct result of the Idaho MassResistance parents being tireless and simply not giving up. At a certain point, the School Board basically gave in and acted.

Some locales where this is happening will be harder to change than others. But no matter how difficult, this is what needs to be done everywhere in America.