Without addressing the merits of the complaint in any fashion, the Court ordered the case dismissed on the equitable grounds of “laches”, finding that the “facial” challenge to the constitutionality of Act 77, the law which created no-excuse mail-in balloting, was a matter the plaintiffs could have brought the time the Act was passed.  The Court found a lack of diligence from the fact that they did nothing for more than a year, during which time both a primary and general election took place in which “no-excuse” mail-in voting procedures were employed.

I’m going to make a point here, at the outset, that is somewhat out of place because I want the readers to keep it in mind as they read through the remainder of this article.

The Kelly complaint alleges that Act 77 changed the voting process in Pennsylvania in a manner that amended the Pennsylvania Constitution, without going through the process for making amendments to the Constitution as set forth therein.

What I have not seen commented on — and that failure is why I put this issue here at the top — is that one of the approvals required in the process for amending the Pennsylvania Constitution is that proposed Amendments must receive a majority vote of Pennsylvania electors in a general election.

The voters of Pennsylvania were entitled to have a say in whether the Constitution’s provisions regarding elections and voting should be amended.  The General Assembly, Governor, Secretary of the Commonwealth, and County Boards of Election DISENFRANCHISED Pennsylania voters by imposing a “no-excuse” change to the “absentee ballot” provisions of the Constitution without first getting their approval.

Once again the Kansas legislature fails the people that it feigns to represent, denying its citizens the right to decide if the Kansas constitution includes the right to abortion demonstrating its continued worthlessness.  The people of Kansas must live under a judicial oligarchy created and nurtured by the stupidity and malfeasance of this body of motley fools.

Self government is not a constitutional right in Kansas because the legislature and its lawyer interest group select candidates for the Supreme Court independent of the people ensuring authoritative control continues. Thus the people are prevented from saying ‘No’ to the special interests that want unlimited funding for substandard schools and the continued slaughter of the unborn for the baby body parts trafficking industries.

The Kansas legislature spends its time working against the very people that elected them pandering exclusively to a myriad of special interest groups including the American Federation of Teachers,  Equality Kansas, KNEA, Kansas Association of School Boards, Johnson County Educators PAC, Kansas Farm Bureau, Kansas Advancing Women, Planned Parenthood, Sierra Club and a host of others denying the fundamental right to Life, Liberty and the pursuit of happiness as guaranteed in the Declaration of Independence. The people do not have the final say whether or not they wish to fund a government agenda as that power has been usurped by the courts through the ubiquitous ‘compelling interest’ of the state legalese..

The people are governed by a succession of thugs in a corrupt legislative process that earned a failing grade in a 2015 state integrity investigation.  According to the Metrovoice, the state’s pro-abortion governor Laura Kelly has deep ties to Kansas City Corruption supporting the “sleazy underground” political interests that funded her campaign. Kelly has joined the ranks of other unsavory governors complicit in abetting the State Bar in packing the Kansas judiciary with odious candidates.  The last thing these characters want is to relinquish control of the Kansas Supreme court to the people of Kansas.

There is a long history of Kansas being an abortion Mecca with the courts protecting Planned Parenthood’s right to pursue Title X funding genocide.  The state legislature failed the people of Kansas by providing no effective means of impeaching corrupt judges other than removal by the state Supreme Court on the recommendation of the commission on judicial qualifications.  This firmly places the state bar association in charge of who can be a judge so not only does the fox guard the chicken house but establishes the rules on how it should operate as well.

This same corrupt legislative body failed to support the one attorney general who discovered underage girls were being illegally taken for abortion and allowing the state’s ethics commission to remove this attorney general’s ability to practice law in the state. Thereby it chose to guarantee availability of abortion funds for favored individual’s election campaigns and to maintain the status quo. Because of the self serving actions of this worthless e body, people are coming from all over the country to abort their children especially from states whose stiffer regulations make abortion more difficult to obtain.

As of 2919, the Kansas Supreme Court again exercised its supervisory authority over the public, ruling that the state constitution contains the right to abortion stretching its legal reasoning beyond the limits of credibility to deny the people’s right to self government.

Kansas has subsequently joined the community of repressive nations where secret courts rule such as China, Iran and North Korea whose despots impose insufferable rule over their citizenry.

In early July 2019 I received a notification from the Kansas Department of revenue that I had not paid my 2018 taxes amounting to $18.00!  Yes, you read that correctly as I owed no federal income taxes thanks to the Trump tax cut but the state of Kansas still manages to squeeze out revenue from its denizens despite zero liability on one’s federal return.

I had just 15 days to respond.  If I didn’t there was a list of options the agency could choose from including but not limited to:

·         Seize your property including motor vehicles, boats and recreational vehicles

·         Suspend or revoke any liquor or dealer licenses you may hold 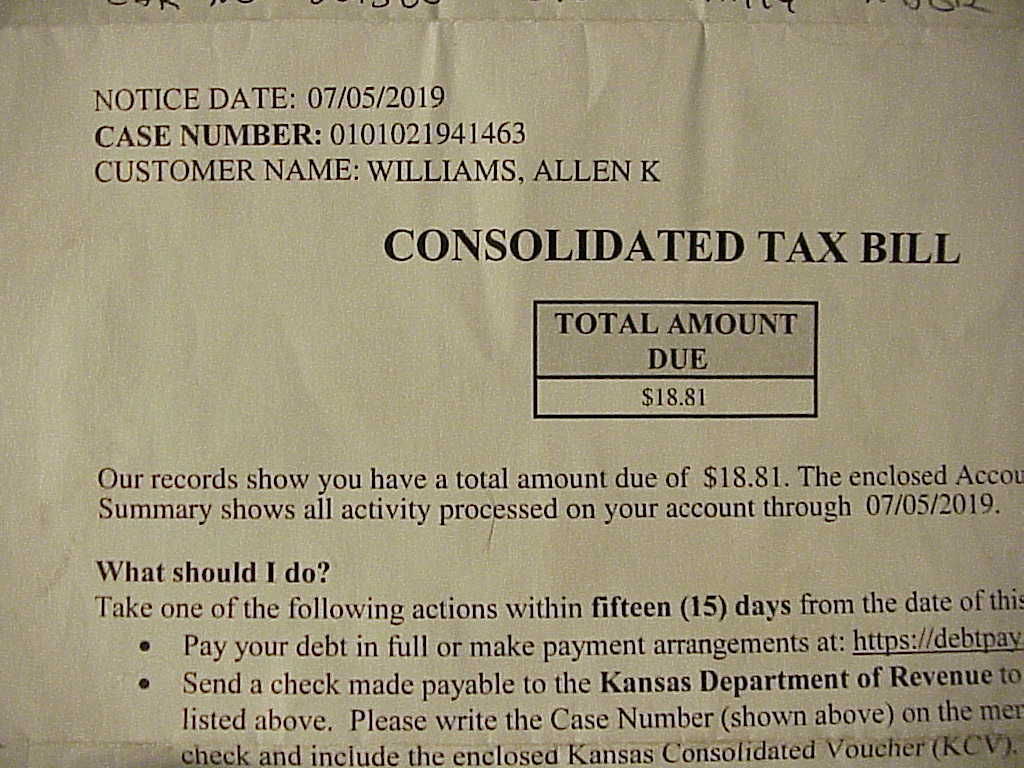 So I phoned the agency to try and clear up the matter and as expected the system is fully automated.  I was immediately dumped into the queue with seven people ahead of me.  I continued holding until I was No 5 when suddenly a connection was made and I was on the line with someone from the revenue department who identified herself as Martha.

Before I could discuss the tax problem with Martha, I had to jump through a number of hoops to identify myself with name, address, telephone number, date of birth, SS number, etc.  It was unacceptable to give the agent my case number of 0101021941463 as I could be someone impersonating me trying to claim I paid the bill or to make arrangements to pay the delinquency.  Yes, these people really are that dense. 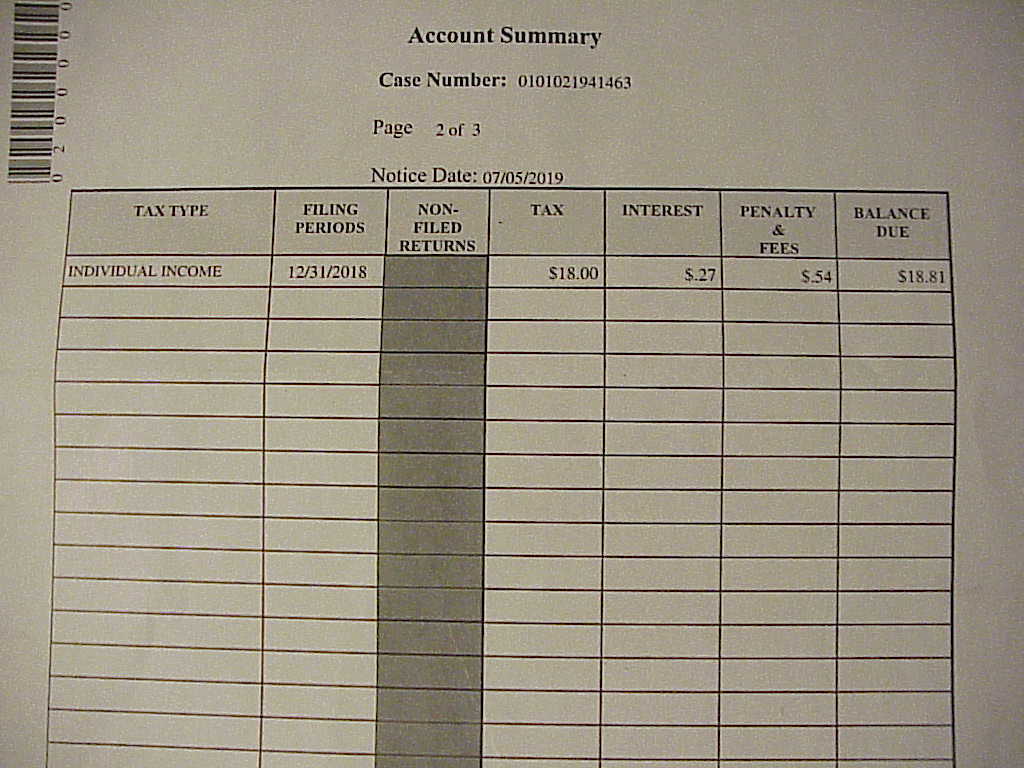 Tax bill due plus interest and penalties

Despite my having given this woman my check number, amount and the date that payment was made, Martha wanted a copy of the check with the department’s endorsement.  All that was really necessary was to do a system search for the check number and within minutes she would have been able to ascertain its disposition.  But that assumes these people are willing to assist taxpayers as well as the preexistence of adequate department infrastructure, e.g.: (1) the department is not understaffed  (2) Incompetence throughout the department is not a factor (3) a weaponized response via political referral  or previous encounter is not a factor.

I went to my bank with the same information I gave to Martha and in about ten minutes they discovered that KS revenue cashed my $18.00 check four days after I mailed my tax return on April 11th   but then failed to record it for whatever reason.  Obviously, the department of revenue has shorted its ability to monitor payments into the system and may not have had the means to verify my payment.  This is irresponsible. But given the dismal oversight in the department, the lack of vision and the stupid political decisions, I expect things to grow progressively worse in the future due to the state’s escalating debt. 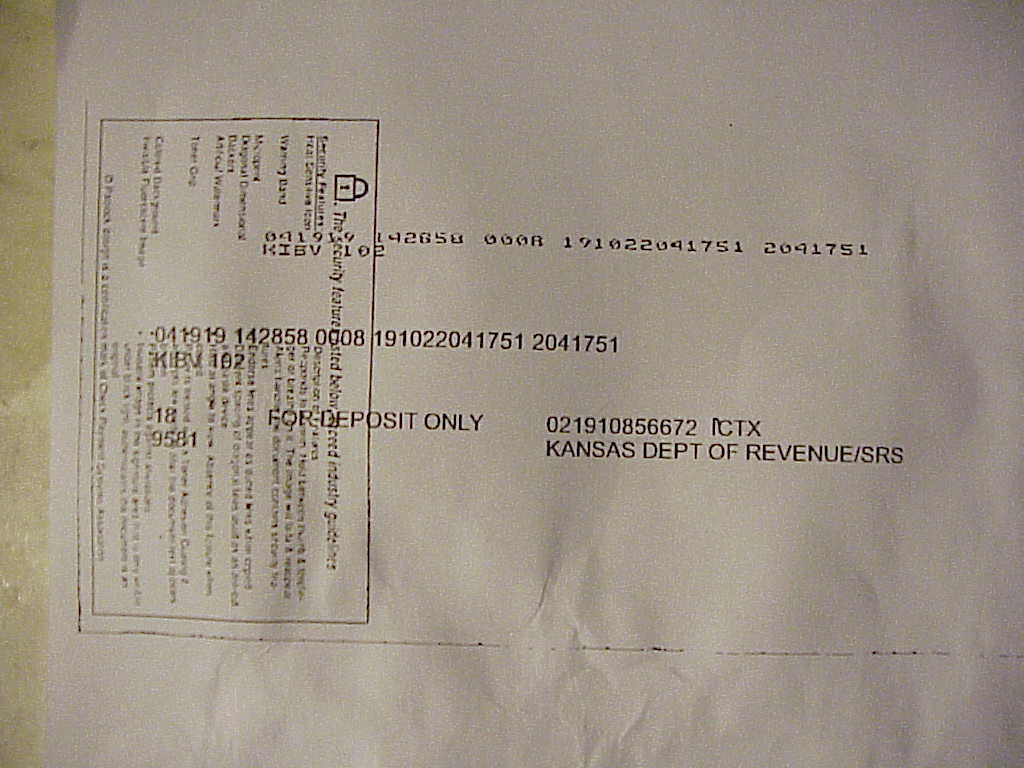 I should note that the department t of revenue would easily have accepted a second check to settle my account but due to its outsourcing tax returns likely would have resulted in the same outcome.  The agency has little regard for the people it allegedly serves.

Kansas is a small state with a population of around 2,911,505 persons as of July 2918.  The state has a myriad of debt problems between funding public education and the Kansas Public Employees Retirement system (KPERS) and is desperate for money.

Kansas agency laid off dozens of employees last year. Now it wants them back   https://www.kansas.com/news/politics-government/article230757674.html#storylink=cpy

“KDOR announced in May 2018 that it would eliminate 56 positions as part of a contract with CGI to provide professional services to operate, maintain, enhance and support the Department of Revenue’s tax systems… He said the state will own certain “deliverables” produced by CGI and reiterated that taxpayers won’t experience any disruptions.” Really? so what do you call the disruption I received from the Kansas Dept of Revenue.. an enhancement?  -  https://www.kansas.com/news/politics-government/article230757674.html

Despite increased computer technology the Kansas Department of Revenue is a poorly managed state agency. Contracting out services with increased liability for school lawsuits and public employees’ retirement obligations is a fool’s errand and has worsened the agency’s ability to perform.

Kansas is at the center of endless lawsuits over school funding and keeping the state employees retirement fund up to date  (https://business.ku.edu/sites/business.ku.edu/files/docs/pdfs/centers/bcae/TR%2017-0901--Underfunding%20KPERS%20%28Hall%29.pdf) such that there is little money for anything else. School funding in Kansas consumes over 51% of the state’s budget and taxpayers are on the hook for some 8 billion in unfunded actuarial liability for public employees.

Kansas currently features a per capita debt higher than the US average.“Overall, the State had used debt sparingly in prior decades and was previously considered a low debt state. Now we are a moderate debt state with Moody’s Net Tax Supported Debt of $1,575 per capita. The US average is $1,473…”-  https://www.kdfa.org/sites/default/files/uploaded_files/2017%20Debt%20Study%20Rev%200.pdf The media buffoons think that when a state’s per capita debt is higher than the US average, it’s a moderate debt state.

A commission consisting of four lawyers and four non lawyers selects the state’s Supreme Court justices who inure the school’s right to sue the state legislature. It’s a ‘win-win’ for special interests like Alan Rupe and associates who have made a career out of suing the state legislature over school funding.

Look for future difficulties in this haphazard agency chiefly due to good old boy politics and the state’s failure to get the Kansas Supreme court out of dictating school funding.