A five year feasibility study was conducted using process modeling to design new fuels that could inherently reduce nitric oxides, sulfur dioxide and mercury emissions in power generation. The commercial station chosen for the study was a northeastern utility in Homer City with a history of emission difficulties. Heat data for the utility's unit 3 was available from diagnostic work done at this station back in the early 1980s...(the article continues at the International Journal of Science and Engineering Publication URL: https://ephjournal.org/index.php/se/article/view/1677

From the 1970s through the 1990s, acid rain was the main environmental concern. Lakes1, vegetation2 and animals3 were affected.

The New York Times reported in 1979:“The rapid rate at which rainfall is growing more acidic in more areas has led many scientists and governmental officials to conclude that acid rain is developing into one of the most serious worldwide environmental problems of the coming decades.”4
What is acid rain?
Acid rain simply refers to rain or other precipitants that have uncommonly high acidity. This is a result of SO2 in the air that dissolves in water creating sulfuric acid. The source of this SO2 is largely power plants that burn fossil fuels.
EPA
The EPA, under the 1990 Clean Air Act amendments, created the Acid Rain Program (ARP). The aim was to reduce the amount of NO2 and SO2 emissions, while allowing for the industry to employ cost-effective technology to achieve this goal. As the following graph shows, the program was a remarkable success.

Figure 1. SO2 Emissions from CSAPR and ARP Sources, 1980–2016 (ARP- The Acid Rain Program; CSAPR -Cross-State Air Pollution Rule)5
The EPA reports concluded that experience with the Clean Air Act since 1970 has shown that protecting public health and building the economy can go hand in hand.6 Furthermore, “The emissions reductions have led to dramatic improvements in the quality of the air that we breathe. Between 1990 and 2017, national concentrations of air pollutants improved... 88 percent for sulfur dioxide”7 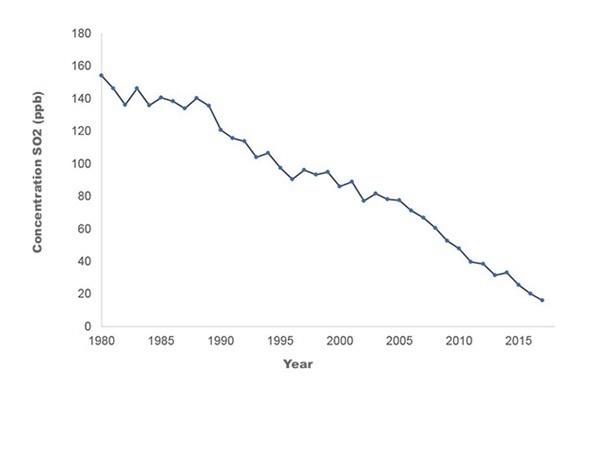 Figure 2. Note. Data for SO2 concentration from SO2 Air Quality, 1980-2017 (Annual 99th percentile of Daily Max 1-hour Average) National Trend based on 42 sites. 90% decrease in national average8
The Technology
Flue gas desulfurization units are used to remove SO2 from flue gas; the process is also called scrubbing. The most common type is limestone scrubbing, in which the flue gas is stripped by dissolution into water. The stripped gas reacts with the limestone (CaCO3) resulting in solid residue, in this case calcium sulfite (CaSO3). The scrubbing efficiency is usually higher than 90%. To achieve this level of efficiency, the concentration of SO2 must be monitored both before and after the process.
The Analysis
The OMA-300 measures a full, high-resolution spectrum. This allows for both applications to be monitored continuously by the same analyzer, from 4000 ppm to 10 ppm full scale. Hence, it provides an indication of the process’ effectiveness by measuring the SO2 before and after the flue gas desulfurization unit. 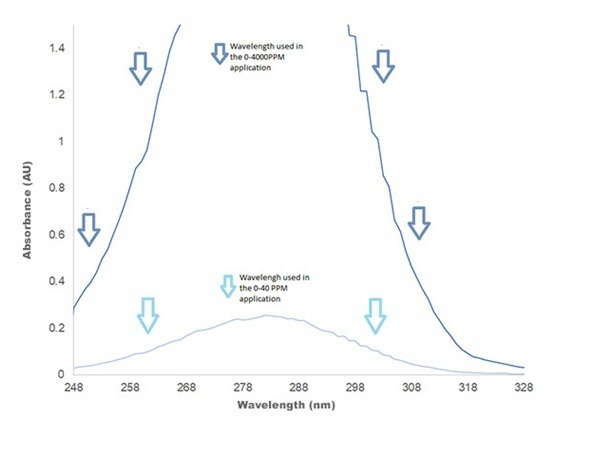 Figure 3: Absorbance spectra of SO2 40 ppm and 4000 ppm, demonstrating that one analyzer can be used for both applications simultaneously. The absorbances at different wavelengths are correlated to the SO2 concentration.
The Future
While controlling industrial SO2 emission in North America and Western Europe has been largely successful, acid rain is still a problem in rapidly growing economies such as China and India. Even the famous Taj Mahal in Agra is facing corrosion of its marble9. Hopefully, in the very near future, these burgeoning regions will implement the same technology and regulations that worked so well in more established countries.
References
1. WILLIAM K. STEVENSJAN , ‘Study of Acid Rain Uncovers a Threat To Far Wider Area’, New York times, 16, 1990.
2. WILLIAM K. STEVENSAPRIL, ‘The Forest That Stopped Growing: Trail Is Traced to Acid Rain’ New York Times, 16, 1996 .
3. LES LINEMARCH ‘Acid Rain Leading to Moose Deaths’ , New York Times, 12, 1996.
4. (BAYARD WEBSTERNOV. “Acid Rain: An Increasing Threat” New York Times 6,11, 1979).
5. https://www3.epa.gov/airmarkets/progress/reports/pdfs/2016_full_report.pdf
6. https://www.epa.gov/clean-air-act-overview/clean-air-act-and-economy
7. https://www.epa.gov/clean-air-act-overview/progress-cleaning-air-and-improving-peoples-health
8. https://www.epa.gov/air-trends/sulfur-dioxide-trends#soreg
9. Henry Fountain and John Schwartz ‘Have We Passed the Acid Test?’ New York Times May 2, 2018