Posts tagged with
by Staff 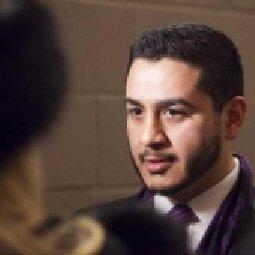 Emboss this man's face and name in your mind.  His name is Abdul El-Sayed. His professional profile is on Linked in.

"The Democratic Party may have found its next Barack Obama. His name is Dr. Abdul El-Sayed, he’s a 32-year-old medical doctor [born to Egyptian Muslim immigrants] who recently launched his campaign for governor of Michigan, the election for which is in November 2018. If he wins he would be America’s first Muslim governor....Dick Manasseri, spokesman for Secure Michigan, a group that educates Michiganders about the threat of Shariah law, predicts that Sayed will at least win the Democratic nomination for governor."

Sayed is sympathetic to the Muslim Brotherhood who are looking to start their own political party. and he is running for Governor of Michigan, Which is Step 1 in his preparation to run For President Of the United States.  His education was funded by Paul Soros, the older brother of George Soros, Here's the FBI file on Paul Soros,   Olive Branch reports: "El-Sayed is supported by Muslim Brotherhood and all of their terrorist affiliates. I’m sure that the Left is hoping that President Trump will be a one termer. Dr. el-Sayed will be running for Governor of Michigan in 2018.  You know, the state where Dearborn has been referred to as “Dearbornistan” for many years now. This city has no-go areas for the police.  And if you would visit Dearborn, you might think that you were in an Arabic country. You see, Muslims do not assimilate – they move in and dominate. That is referred to as “Political Jihad.”

El-Sayed has the potential to be Obama #2, but far more openly Muslim. In 2020 he will be eligible to run for President!

Dick Manasseri, a spokesman for Secure Michigan, that educates Michiganders about the threat of Shariah law, predicts that Sayed will at least win the Democratic nomination for governor.   "Manasseri points out that a bill supporting American Law for American Courts, widely regarded as an anti-Shariah law, was defeated in the Michigan Legislature when two powerful lobbies – the Michigan Catholic Conference and the Council on American-Islamic Relations or CAIR – teamed up to kill it.  He expects the same coalition to form behind a candidate who would make history as America’s first Muslim governor."

Although there appears to be no direct link between El Sayed and the Council on American Islamic Relations (CAIR), they are nonetheless supporting his candidacy.  The Capitol Research Center tells us  "CAIR was founded in 1994 by Nihad Awad, Omar Ahmad, and Rafeeq Jaber. The three men were linked 4to the Islamic Association for Palestine (IAP), which was established by senior Hamas operative Mousa Abu Marzook and created to serve as Hamas’ public relations and recruitment arm in the United States."  The Clintons apparently took an interest in CAIR because of their unindicted co conspiritor classification

The Capitol Research article continues: "Information about CAIR’s revenue sources is surprisingly difficult to come by.IRS filings reveal donations to CAIR by Rockefeller Philanthropy Advisors ($30,000 since 2008), Silicon Valley Community Foundation ($90,000 since 2008), and Tides Foundation ($5,000 since 2002). CAIR is actually registered as CAIR Foundation Inc., a public charity recognized under section 501(c)(3) of the tax code. That entity reported a budget of $2,632,410 in 2014 and gross receipts of $2,355,032. It also claims to have had 28 employees in 2014 and 40 volunteers. Many of CAIR’s state and local chapters are separately incorporated as nonprofits."

CAIR was an unindicted coconspiritor in a HAMAS funding case along with the Islamic Society of North America and the North American Islamic Trust according to Jihad watch "Critics note that several former CAIR officials have been convicted or deported after being charged with fraud, embargo violations, or aiding terrorist training."

Note that London's mayor is muslim too

Democrat Keith Ellison is now officially the first Muslim United States congressman. True to his pledge, he placed his hand on the Quran, the Muslim book of jihad and pledged his allegiance to the United States during his ceremonial swearing-in.

Capitol Hill staff said Ellison's swearing-in photo opportunity drew more media than they had ever seen in the history of the U.S. House. Ellison represents the 5th Congressional District of Minnesota.

The Quran Ellison used was no ordinary book. It once belonged to Thomas Jefferson, third president of the United States and one of America's founding fathers. Ellison borrowed it from the Rare Book Section of the Library of Congress. It was one of the 6,500 Jefferson books archived in the library.

Ellison, who was born in Detroit and converted to Islam while in college, said he chose to use Jefferson's Quran because it showed that "a visionary like Jefferson" believed that wisdom could be gleaned from many sources.

There is no doubt Ellison was right about Jefferson believing wisdom could be "gleaned" from the Muslim Quran. At the time Jefferson owned the book, he needed to know everything possible about Muslims because he was about to advocate war against the Islamic "Barbary" states of Morocco, Algeria, Tunisia and Tripoli.

Ellison's use of Jefferson's Quran as a prop illuminates a subject once well-known in the history of the United States, but, which today, is mostly forgotten - the Muslim pirate slavers who over many centuries enslaved millions of Africans and tens of thousands of Christian Europeans and Americans in the Islamic "Barbary" states.

Over the course of 10 centuries, Muslim pirates cruised the African and Mediterranean coastline, pillaging villages and seizing slaves.

The taking of slaves in pre-dawn raids on unsuspecting coastal villages had a high casualty rate. It was typical of Muslim raiders to kill off as many of the "non-Muslim" older men and women as possible so the preferred "booty" of only young women and children could be collected.

Young non-Muslim women were targeted because of their value as concubines in Islamic markets. Islamic law provides for the sexual interests of Muslim men by allowing them to take as many as four wives at one time and to have as many concubines as their fortunes allow.

Boys, as young as 9 or 10 years old, were often mutilated to create eunuchs who would bring higher prices in the slave markets of the Middle East. Muslim slave traders created "eunuch stations" along major African slave routes so the necessary surgery could be performed. It was estimated that only a small number of the boys subjected to the mutilation survived after the surgery.

When American colonists rebelled against British rule in 1776, American merchant ships lost Royal Navy protection. With no American Navy for protection, American ships were attacked and their Christian crews enslaved by Muslim pirates operating under the control of the "Dey of Algiers"--an Islamist warlord ruling Algeria.

Because American commerce in the Mediterranean was being destroyed by the pirates, the Continental Congress agreed in 1784 to negotiate treaties with the four Barbary States. Congress appointed a special commission consisting of John Adams, Thomas Jefferson, and Benjamin Franklin, to oversee the negotiations.

Lacking the ability to protect its merchant ships in the Mediterranean, the new America government tried to appease the Muslim slavers by agreeing to pay tribute and ransoms in order to retrieve seized American ships and buy the freedom of enslaved sailors.

Adams argued in favor of paying tribute as the cheapest way to get American commerce in the Mediterranean moving again. Jefferson was opposed. He believed there would be no end to the demands for tribute and wanted matters settled "through the medium of war." He proposed a league of trading nations to force an end to Muslim piracy.

The Americans wanted to negotiate a peace treaty based on Congress' vote to appease.

During the meeting Jefferson and Adams asked the Dey's ambassador why Muslims held so much hostility towards America, a nation with which they had no previous contacts.

In a later meeting with the American Congress, the two future presidents reported that Ambassador Sidi Haji Abdul Rahman Adja had answered that Islam "was founded on the Laws of their Prophet, that it was written in their Quran, that all nations who should not have acknowledged their authority were sinners, that it was their right and duty to make war upon them wherever they could be found, and to make slaves of all they could take as Prisoners, and that every Musselman (Muslim) who should be slain in Battle was sure to go to Paradise."

For the following 15 years, the American government paid the Muslims millions of dollars for the safe passage of American ships or the return of American hostages. The payments in ransom and tribute amounted to 20 percent of United States government annual revenues in 1800.

Not long after Jefferson's inauguration as president in 1801, he dispatched a group of frigates to defend American interests in the Mediterranean, and informed Congress.

Declaring that America was going to spend "millions for defense but not one cent for tribute," Jefferson pressed the issue by deploying American Marines and many of America's best warships to the Muslim Barbary Coast.

In 1805, American Marines marched across the desert from Egypt into Tripolitania, forcing the surrender of Tripoli and the freeing of all American slaves.

During the Jefferson administration, the Muslim Barbary States, crumbling as a result of intense American naval bombardment and on shore raids by Marines, finally officially agreed to abandon slavery and piracy.

Jefferson's victory over the Muslims lives on today in the Marine Hymn, with the line, "From the halls of Montezuma, to the shores of Tripoli, We fight our country's battles in the air, on land and sea."

It wasn't until 1815 that the problem was fully settled by the total defeat of all the Muslim slave trading pirates.

Jefferson had been right. The "medium of war" was the only way to put and end to the Muslim problem. Mr. Ellison was right about Jefferson. He was a "visionary" wise enough to read and learn about the enemy from their own Muslim book of jihad.