Recently I wrote my US Senator, Jerry Moran using the constituent form on his website. It was months later when I received a response. By that time I could not remember what I contacted him about but it definitely was not about Ukraine !  I had to search my email messages. Here is what I wrote to Moran on June 29 of this year.

The country is in a fight for its rightful President. Where will YOU be? We are making progress.

Why we NEED another constitutional Amendment NOW ON B4IT'S NEWS !
https://beforeitsnews.com/scandals/2022/06/kansas-supreme-court-an-enemy-of-the-people-2438581.html

It is the science of responses that demand any incubent wait some indeterminite time to permit the writer (constituent) to forget what issue he or she was addressing. Then he or she receives some detailed response on something irrelevent or an issue importent to the bureaucrats as I did on Ukraine.  Meanwhile I had no recollection of ever raising this issue with my representative or Senator. My recent communication with Moran illustrates just such an event.

"This message is to let you know that I received your email. Your thoughts are important to me and I will respond as soon as possible. I welcome you to use the following services to stay connected and to contribute your ideas and feedback:

What message? I can't even remember what I wrote him about and he doesn't indicate anything in his response, THIS IS NO ACCIDENT. His resonses are primarily for social media followers.

Thousands of events have occured since I contacted him. One isn't free to discuss an opinion on Twitter of Facebook without being banned or 'fact checked'  and since we are aware of the trusted partnership between Twitter and government.

Moran isn't concerned about his constituents feelings, opinions or ideas because the common usage of electronic voting black boxes guarnantees re-election for any candidate due to the machine's ability to select the winner by any voting margin through algorithms. This is how freedom and self government are lost.

Here is my response

What a worthless electronic constituent form you offer. Guess this is the new globalist method of contacting your supposed representative.

I just received a response from you over the Ukraine which I don't recall writing. Your staff typically responds with bullshit instead of addressing the issues I raised. Obviously you and your staff are totally devoid of any semblance of comprehending reality with the response I received.

With rampant inflation. courtesy of our fraudulent president, the high cost of food, gas, runaway immigration, FBI criminal behavior and the 2020 stolen election, your staff is concerned about Ukraine. Why aren't you concerned about OUR own southern border?

You are using my money to support a fascist state in Ukraine ! Undoubtedly this is why a response from your office is never forthcoming before at least 6 months. Let plenty of time go bye for the constituent to forget what issue he or she raised.

We are obviously NOT represented by you or either party in Kansas. This republic is about finished thanks to years of you people taking globalist money and doing nothing. Even President Trump's house isn't safe. You all better hope that the ES&S voting machine is still scamming the public so Kris Kobach doesn't get elected in November because he will work against the cartels controlling the border.

The district would be better off if we were represented by some WINO. 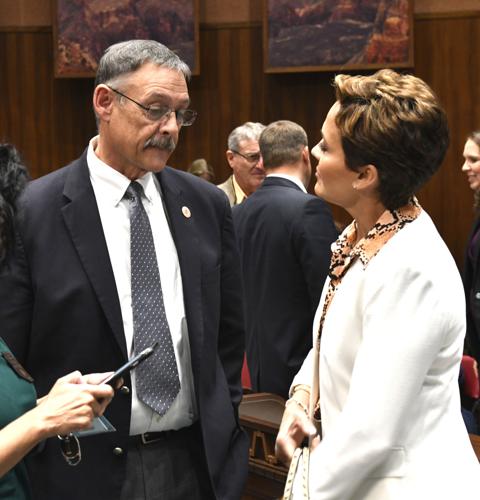 PHOENIX — Two Republicans seeking statewide office are asking a federal judge to block the use of machines to tabulate the votes in Arizona in the 2022 election.

[Update 7/18/22 The court will hear this case on July 21,2022 at 9:00 AM. The hearing is scheduled to last 5 hours with two hours for plaintiffs to present their case and three hours for the defense's refutation. It will be covered live on frankspeech.com as breaking news through periodic interruptions to existing programs] - ED]

Gubernatorial hopeful Kari Lake and Mark Finchem, running for secretary of state, contend that the machines are unreliable because they are subject to hacking. And they say that the use of components in computers from other countries makes them vulnerable.

But attorney Andrew Parker who filed the lawsuit on their behalf said there is something even more basic.

He said that the tabulation of votes is an inherently governmental function. Yet by using machines built and programmed by private companies the state has effectively farmed that out.

And what’s worse, Parker said in his filings, is that the technology is kept secret from the public.

“This lack of transparency by electronic voting machine companies has created a ‘black box’ system of voting which lacks credibility and integrity,’’ he wrote in a copy of the lawsuit furnished to Capitol Media Services.

What he wants is a court order to have the 2022 election conducted with paper ballots which would be counted by hand, calling it “the most effective and presently the only secure election method.’’

Neither Lake nor Finchem would agree to be interviewed on the lawsuit.

But Lake, in a Facebook interview with Trump supporter Mike Lindell, said the litigation is the result of what she believes was a stolen 2020 election.

“We know how tragic it was that this election (was) corrupted the way it was here in Arizona,’’ she said. “And we don’t want it to happen again.’’

The lawsuit also cites what Parker said were “irregularities and evidence of illegal vote manipulations’’ in voting systems used in the 2020 election. While most of the incidents were from elsewhere, the list includes claims from the Cyber Ninjas “audit’’ of Maricopa County’s election process about things like software and patch protocols not being followed and missing files.

County officials responded to each of the allegations months ago, saying those findings were in error and proved that Cyber Ninjas, which had never done such a review, clearly did not understand election equipment, procedures or laws.

But Parker also said the lawsuit is not an attempt to undo the 2020 presidential results in Arizona which gave Joe Biden the state’s 11 electoral votes.

“It is only about the future — about upcoming elections that will employ voting machines designed and run by private companies, performing a crucial governmental function, that refuse to disclose their software and system components and subject them to neutral expert evaluation,’’ he wrote. “It raises the profound constitutional issue: Can government avoid its obligation of democratic transparency and accountability by delegating a critical government function to private companies?’’

At the heart of the complaint are the contentions by some, particularly among those like Lake and Finchem who still deny the results of the 2020 election, that it was stolen. While some of the issues involve unproven allegations that forged ballots were inserted into the system, there has been a consistent litany of complaints that the hardware and software used to tally ballots was hacked or, worse, was programmed to produce a win for Biden.

“The parallels between the statistical analysis of Venezuela and this year’s election are astonishing,’’ wrote Cyber Ninjas owner Doug Logan even before being hired by Senate President Karen Fann to review the results. That refers to claims that there was a link between Dominion Voting System and the family of now-deceased dictator Hugo Chavez.

“I’m ashamed how few Republicans are talking about it,’’ Logan said.

Parker makes no such claims. Instead he wants a judge to prohibit the use of electronic voting machines in Arizona “unless and until the electronic voting system is made open to the public and subjected to scientific analysis by objective experts to determine whether it is secure from manipulation or intrusion.’’

Arizona does have various systems designed to check equipment.

For example, counties are required to conduct “logic and accuracy’’ tests, both before and after the official tally. That process, done in public, involves taking a known set of ballots and running them through the tallying equipment to ensure that the results reported by the machines matches what actually has been marked.

Parker contends those tests don’t prove anything to deal with what he said are “security problems inherent in the use of electronic voting machines.’’

“All post-election audit procedures can be defeated by sophisticated manipulation of electronic voting machines,’’ he claims.

He specifically cited the refusal of Dominion to surrender its passwords to Cyber Ninjas for examination, with Dominion attorneys saying granting such access to the workings of its equipment violated the company’s protections against illegal search and seizure.

But what Parker does not mention is that there was an agreement between the Senate and the county that allowed three independent experts, including one recommended by the Senate, to examine the equipment. They reported that the system was not connected to the internet and that there was no evidence of data deletion, data purging, data overwriting or other destruction of evidence.

In seeking a court order, Parker wants more than just the use of paper ballots in 2022.

He also wants each ballot to have a unique identification number known only to the voter so each can tell if his or her ballot was counted properly. And Parker said each ballot would be printed on specialized paper that cannot be counterfeited.

The Republican-controlled legislature actually mandated the use of “anti-fraud ballot paper’’ in 2021. But it was voided by the Arizona Supreme Court which ruled that the provision was placed illegally into unrelated budget legislation.

A similar measure was introduced this year but has not been approved.

While the issue of voting machines has largely been a Republican talking point, the lawsuit does have at least one indication of bipartisanship: attorney Alan Dershowitz is part of the legal team.

“You have to understand I’m a liberal Democrat,’’ he said during the Lindell Facebook interview.

“I’m happy with the results of the election,’’ Dershowitz said. “This is about whether or not votes are being properly counted.’’