Posts tagged with
by Allen Williams
The Telegraph has an explosive story that places the Covid-19 Wuhan virus squarely in the hands of the Communist Chinese. 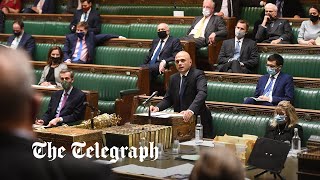 "COVID-19 is an "unrestricted bio-weapon" that slipped from a Wuhan facility. This claim was according to a Chinese virologist who fled to the United States after claiming that China covered up the coronavirus epidemic.

Dr. Li published research on her claims and discoveries on COVID-19's origins in the Wuhan bio lab last year. A Chinese virologist was one of the researchers who looked at it. Science Times reported that her studies were shut down and removed. It forced her to flee for her safety. Dr. Yan has been barred from social media since then for "misinformation."  - https://www.sciencetimes.com/articles/31562/20210606/is-covid-19-a-bioweapon-heres-what-chinese-whistleblower-dr-li-meng-yan-told-dr-anthony-fauci-in-email.htm

Despite Boris Johnson's assurances that Britain would have no vaccine passport, it has now become a reality. "Wow" — that's what one MP exclaimed when the vote on vaccine passports was declared." A new era of warfare is exploding on the scene to set up the biblical scenario described in the bible using the concept of biological weapons where people will accept loss of freedom for supposed safety from engineered harm.
"There should now be no doubt that China has had an active and extensive biological warfare program of which COVID-19 was one of its “biotechnological weapons” https://richardsonpost.com/joe-hoft/23920/new-report-shows-covid-was-a-chinese-bioweapon/
You can see a World government coming from Daniel 2, Daniel 7 and the words of Jesus Christ in Matthew 24 and Revelation 13 which predicts a one world global government in which bread alone will cost a day's wages.
Expect that a unique program of only 'the vaccinated may vote' to soon emerge in the United States, perhaps as early as 2022, as the puppet BIden Administration will need to 'guarantee' the next election from the exposed 2020 machine and other fraud. Of course, this would never be considered as voter disenfranchisement'.

What more effective means under a never ending virus threat could ensure a globalist victory?