The deployment of National Guard members along the United States’ southern border has led to more than 10,000 arrests, Customs and Border Protection officials said Monday.

About 1,600 Guard members have been deployed along the border since April, assisting Border Patrol agents with a variety of duties.

Their presence has led to 10,805 “deportable alien arrests,” said CBP press secretary Corry Schiermeyer, according to the Washington Examiner.

Guard members cannot make arrests because they are members of America’s military, but they can both lead agents to places where illegal immigrants have crossed and perform duties that free up agents to patrol the front lines.

More than 3,300 attempted border crossers were turned back because the Guard was on duty, Schiermeyer said. Further, 11,686 pounds of marijuana has been seized due to the presence of Guard units.

“From the get-go, our goal has been to return agents back to the border. Not all soldiers are directly replacing an agent, but every soldier contributes to the overall mission,” Assistant Chief Alfredo Lozano told Stars and Stripes last week.

Guard units are deployed through the end of September.

Despite the efforts of multiple law enforcement and military units, illegal immigrants still make it across the border.

“We remain steadfast in our commitment to vigorously pursue members of transnational criminal networks that exploit and endanger people they smuggle into our country,” Jack P. Staton, special agent in charge of ICE Homeland Security Investigations in El Paso, said in a statement.

The Washington Post  has reported that the Trump administration is considering a financial agreement with Mexico in which Mexico would help reduce the numbers of illegal immigrants coming across the border.

“We believe the flows would drop dramatically and fairly immediately” if such a deal took place, the Post quoted an unnamed senior Department of Homeland Security official as saying.

The way the plan would work is that illegal immigrants coming from Central America through Mexico would apply for protection there. Then, the U.S. can return anyone crossing the border illegally to Mexico.

“Look at the amount of money spent on border security, on courts, on detention and immigration enforcement,” the senior DHS official said, according to the Post.

“It’d be pennies on the dollar to support Mexico in this area.”

Facebook has greatly reduced the distribution of our stories in our readers' newsfeeds and is instead promoting mainstream media sources.
When you share to your friends, however, you greatly help distribute our content. Please take a moment and consider sharing this article with your friends and family. Thank you.

Since the day that he first announced his candidacy, Donald Trump has repeatedly insisted that his presidency would oversee the construction of a wall along the country’s southern border to secure the nation from illegal immigration and other criminal activity, like the trafficking of drugs.

Now, after Trump has been in office for nearly a full year, The Wall Street Journal reported that it had received a document from the Department of Homeland Security that outlined how the administration sought roughly $18 billion over 10 years to construct approximately 700 miles of new border barriers, which would more than double the already existing 654 miles of border wall

According to Breitbart, the administration is actually asking for about $33 billion over 10 years to fund a variety of border security measures, of which the wall is merely one part.

Roughly half of the requested funds would go toward hiring more Border Patrol officers, installing surveillance towers and other technology, and the construction and maintenance of roads in the border region.  Notably, that $18 billion over 10 years for the wall works out to just $1.8 billion per year, or about a penny out of each $20 spent by the federal government.  The amount is also consistent with the $1.6 billion already approved by Congress for 2018 to be spent on increased border security. Furthermore, Breitbart pointed out that “the wall’s cost would be offset by a reduced northward flow of illegals and drugs, so cutting the federal government’s cost for welfare, unemployment and policing.”

Of course, Democrats who couldn’t care less about the costs of federal programs when they hold the majority — not to mention the national debt or budget deficits — are now feigning outrage at how much the proposed border wall and increased border security will cost taxpayers.

However, $18 billion over 10 years for a border wall sounds like a steal of a deal when compared with how much illegal immigrants are estimated to cost American taxpayers on an annual basis.

In September, FAIR, the Federation for American Immigration Reform, released the results of a study it conducted into just how much illegal immigrants cost taxpayers every year, and the figure the group reached is nothing short of astounding.

Contrary to popular claims from Democrats that illegal immigrants pay enough in taxes to cover any burdens they may impose on taxpayers, FAIR found that the situation was actually wildly out of balance on the local, state and federal level.

Using a widely-agreed-upon estimate of 12.5 million illegal immigrants in the country, it was determined that those illegals — plus their estimated 4.2 million citizen children — cost taxpayers about $134.9 billion annually. That number breaks down to about $45.8 billion on the federal level and $88.9 billion on the state and local level.

Meanwhile, it is estimated that those same illegals only contribute about $18.9 billion in total taxes paid — $15.4 billion federal and $3.5 billion state and local — leaving a grand total annual burden of approximately $116 billion on American taxpayers.

Thus, the annual cost of Trump’s proposed border wall expansion is quite literally only 1.5 percent of what Americans are already paying every year to cover the costs imposed by illegal immigrants.

For what is but a fraction of current spending levels, the country can not only significantly reduce illegal entry into the country, but also reduce the amount of crime, illicit drugs and human trafficking that add untold costs to society, with the building of Trump’s border wall for a mere $1.8 billion per year.

Please share this on Facebook and Twitter to spread the word that Trump’s proposed border wall will only cost a fraction of what American taxpayers already spend every year in dealing with illegal immigration.

One of several wildfires that continue to devastate large portions of California was ignited by a fire used for cooking, authorities announced this week.

In a statement Tuesday, officials indicated the Skirball Fire, which broke out Wednesday morning near Bel-Air, was traced to a homeless encampment near the 405 Freeway where an illegal flame sparked the major blaze.  According to KTLA, the blaze had burned more than 422 acres and destroyed at least six structures. 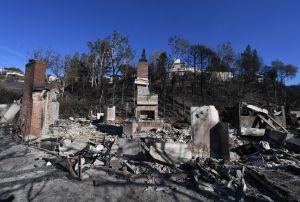 The Skirball Fire that destroyed six structures and burned 422 acres in the hills of Bel-Air was broke out because of an illegal cooking flame ignited at an area homeless encampment, officials said...

Reports indicated another dozen structures were damaged, though it is unclear how many of the damaged and destroyed buildings were homes.

No one was at the scene of the suspected origin when investigators arrived, and there have been no arrests associated with the fire as of the latest reports available.  Hundreds of locals were evacuated as the fire spread and a number of area schools were closed.

The Getty Center museum was also closed to the public, though its priceless works of art remained inside, according to CNN.  Ron Hartwig, a museum spokesperson, said that even in the path of a wildfire, the secure building is the safest location for its contents.  “The building was designed to be the best place to keep an art collection,” he said.

The Los Angeles Fire Department provided an update Tuesday confirming the Skirball Fire was 85 percent contained.  Dozens of firefighters remained on the scene and at three had sustained injuries related to the effort.  Given the arid, windy conditions across California over the past few weeks, other area fires have been much harder for firefighters to contain.

None of the other five major fires that have been sparked across Southern California in recent days have identified origins.  The largest of those blazes, the Thomas Fire, has grown to engulf an area larger than New York City.

It was about 20 percent contained as of the latest estimates available as winds in the region were expected to calm in coming days.  Santa Barbara County fire spokesperson Mike Eliason expressed tempered optimism, saying the situation is “bad, but it’s a better bad.”


"La Raza movement, the agenda that led to those thousands of illegal immigrants in the streets of American cities, waving Mexican flags, brazenly defying our laws, and demanding concessions. Hordes of Mexican expatriates, many here illegally, were protesting the very U.S. immigration laws they were violating with impunity. They found it offensive and a violation of their rights that the U.S. dared to have immigration laws to begin with."

Illegal aliens continue to swarm into the United States on a reconquista mission to reclaim the Southwest as their own.  The US Congress is oblivious to the plight of the average American living in the hostile border region between the Southwestern United States and Mexico.

"MEChA and the La Raza movement teach that Colorado, California, Arizona, Texas, Utah, New Mexico, Oregon and parts of Washington State make up an area known as "Aztlan" — a fictional ancestral homeland of the Aztecs before Europeans arrived in North America. As such, it belongs to the followers of MEChA. These are all areas America should surrender to "La Raza" once enough immigrants, legal or illegal, enter to claim a majority, as in Los Angeles. The current borders of the United States will simply be extinguished....The final plan for the La Raza movement includes the ethnic cleansing of Americans of European, African, and Asian descent out of "Aztlan." Click here to read the full story.


They're too busy luxuriating in a plethora of fine hotels and dining with their special interest friends.

The illegals go unnoticed by the bloated ticks that populate the halls of Congress, people who perennially earn their living from the public money trough. Illegals are welcomed by this austere body as just another group who has seen the light on how to make good use of public money, like their Congressional mentors.

Soulless and exploitative politicians, who 'hallow' the halls of Congress, advancing the reconquista agenda of the illegals for their own gain, portraying themselves as caring and compassionate individuals worthy of re-election, while their pejorative policies wreak havoc on the nation.