Carbon dioxide levels in the atmosphere are growing as a function of the industrialization of the world and particularly the United States.  The IPCC has issued its first report: "..the Intergovernmental Panel on Climate Change (IPCC), a multinational scientific body organized under the auspices of the United Nations, published its first comprehensive report on the topic... the IPCC concluded that "emissions resulting from human activities are substantially increasing the atmospheric concentrations of ... greenhouse gases..."

Man is viewed as an 'eco-cancer' in the earth by globalists and other crackpot scientists who presume the masses are destroying the earth. Yet there is NO evidence of significant temperature increases across the globe despite CO2 releases many times larger than the earth's natural carbon dioxide content. WHY? Because plants metabolize CO2 at faster rates and more limestone is formed according to the concentration driving force governed by reaction Kinetics. 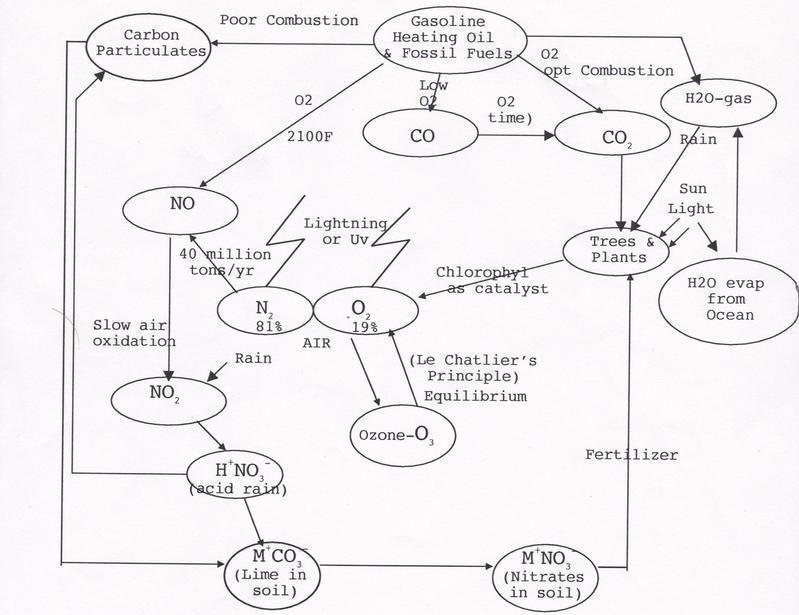 The  Normal Plant Animal Cycle diagram above depicts the carbon flow between plants and animals.

Carbon dioxide is readily soluble in sea and fresh water forming metallic precipitates such as calcium or magnesium carbonate.

The gas readily dissolves in water sources in equilibrium with its liquid concentration just as in many popular soda beverages. CO2 increases in solubility as water temperatures decrease and atmospheric pressure increases.  Concentration is the driving force that causes greater amounts of CO2 to dissolve in water.  In solution, CO2 reacts with metallic ions in the water to form insoluble CaCO3 precipitates like calcite.

Calcite is most often seen in caves as stalagmites or stalagmites. It is also the principal constituent of a sedimentary rock known as limestone. Many Invertebrate Sea animals take up calcite from seawater to construct their shells and are an important part of the animal plant environmental cycle. As carbonates are formed and settle out, more CO2 can be absorbed into the water.  This helps to ensure a stable atmospheric concentration of around 0.04 percent (400 ppm) consistent with the law of conservation of mass.

Atmospheric reactions must occur at ambient conditions of constant temperature and pressure either spontaneously or from activation energy available from solar radiation in open atmosphere.  In order for a reaction to be spontaneous, it must have a negative free energy (G) as defined by the requirements of the Gibbs free energy equation, i.e. G = H - TS.  A spontaneous change is probable whenever enthalpy, H is negative or entropy, S is positive, i.e. (H - TdS) <= 0.

This relationship may also be expressed in terms of the ratios of the forward and reverse rate constants for reactions k1 and k2, i.e. the equilibrium constant, K:

Now, the probability of spontaneous reactions are favorable whenever K is a large positive number, i.e. K >>1. This criterion is a necessary condition for the chemical reaction(s) to proceed.

So carbon monoxide and Nitrous oxide compounds oxidize over time to carbon dioxide and either Nitrogen oxide or Nitrogen dioxide. So atmospheric equilibrium is maintained and the law of Conservation of Mass is upheld.

The principle objection to NO2 in the atmosphere is the formation of acid rain but it is absolutely essential for natural nitration of the soil.

From Appendix C Summary of Calculations 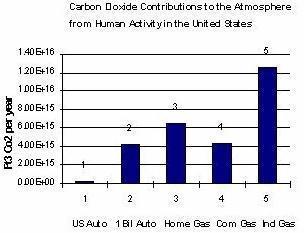 Appendix D shows the most significant man made sources of greenhouse gases. Note that the single largest contributor to atmospheric greenhouse gas is the industrial use of natural gas followed closely by the automobile. The war on fossil fuel has accomplished nothing more than to increase natural gas consumption. Now you know the underlying motive behind the deindustrialization of America and shipping manufacturing jobs overseas. 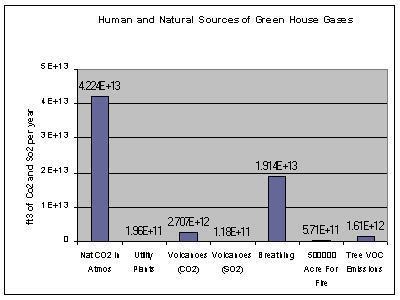 Most importantly, note from the Human and Natural Sources of CO2 chart above that if both natural gas consumption and the automobile were totally eliminated, human breathing would be the dominant source of greenhouse gas. The real environmental problem seems to be human breathing accounting for nearly half of the natural CO2 in the atmosphere exclusive of natural gas consumption and the automobile.

But combined utility consumption and people breathing is the underlying impetus for globalists to force the world's population down to around 1/2 to 1 billion people by any and all means available.  ISIS Created by US & NATO Training & Recruiting Jihadists  is very likely one such means

Killing off vast numbers of the world's population is former science Czar John Holdren's response to climate change in the 1977 book 'Ecoscience', co-authored by Holdren and colleagues Paul and Anne Ehrlich.

Natural News has noted that ".. we've already seen shocking statements from many scientists about their desire to use genetically engineered viral strains to accomplish global depopulation goals."

The 'final solution' is to kill vast numbers of the population to effect a three-fold reduction in carbon dioxide because fewer people use less gasoline and natural gas which translates to less carbon dioxide in the atmosphere.

Science has claimed that fat people are responsible for global warming, "warning that the increase in big eaters(2) means more food production - a major cause of CO2 gas emissions warming the planet.  Overweight people are also more likely to drive, adding to environmental damage. Each fat person is said to be responsible for emitting a tonne more of climate-warming (flatulence) carbon dioxide per year than a thin one… providing extra grub for them to guzzle adds to carbon emissions that heat up the world, melting polar ice caps, raising sea levels and killing rain forests."

Data collected from satellite monitoring of the earth's surface temperatures do not support the assertion of global warming.  NOAA has been caught adjusting temperatures(3) upward to support warming predictions. In a shocking report, errors in a climate change paper(4)showing gains from global warming were retracted.

There is disturbing evidence that atmospheric data have been manipulated by governments and educational institutions in an attempt to demonstrate ecological damage to the environment from high levels of carbon dioxide.  First, the University of East Anglia was involved in a collusion to alter temperature data to support a global warming of earth theory.  The Wall Street Journal reports(5) "Climategate, as readers of these pages know, concerns some of the world's leading climate scientists working in tandem to block freedom of information requests, blackball dissenting scientists, manipulate the peer-review process, and obscure, destroy or massage inconvenient temperature data—facts that were laid bare by last week's disclosure of thousands of emails from the University of East Anglia's Climate Research Unit, or CRU.

If we cannot predict weather reliably more than several hours into the future under most circumstances, why should the predictions of a government computer model be taken seriously? Yet, Time® magazine warns that we are likely to see a 6 oF increase in global temperatures by the year 2006(6) which unsurprisingly never occurred. Neither is there data to support the warnings(7) of "Earth in the Balance. "