There are so many newsworthy details contained in the just-released Wisconsin Special Counsel Report on the 2020 Election that it’s hard to know where to begin. Every American citizen should read this report because it explains how the election was stolen by Democrats. That alone makes it worthwhile.

Let’s start with this story:

The OSC learned that all machines in Green Bay were ESS machines and were connected to a secret, hidden Wi-Fi access point at the Grand Hyatt hotel, which was the location used by the City of Green Bay on the day of the 2020 Presidential election. The OSC discovered the Wi-Fi, machines, and ballots were controlled by a single individual who was not a government employee but an agent of a special interest group operating in Wisconsin.

Wow. So one guy hidden at the Grand Hyatt Hotel controlled Green Bay’s election from his room? What is that guy’s name? According to the report: his name is Michael Spitzer Rubenstein. Why was a lawyer from Brooklyn in control of an election in Wisconsin?

That’s a good question. Let’s begin, though, with an explanation of why it’s been so hard to get any good questions answered at all. Just take a look at your calendar: it’s March 2022. The retired Wisconsin Supreme Court judge who conducted this Special Counsel investigation would remind all of us, first, that we’re talking about companies that are hiding their tracks.

The OSC began a comprehensive investigation of voting machines in Wisconsin. As part of that investigation, subpoenas were sent to Dominion, ESS, and Command Central, LLC, a Dominion reseller and servicer. The information sought included information about who, when, where, and what updates the machines were provided.

The OSC learned that one machine company representative stated that the voting machines were “wiped” during updates, meaning they did not retain federally required voter data.

The OSC was not able to complete this portion of its investigation, however.

As of the date of this Report, the voting machine companies have refused to comply with the OSC’s legislative subpoenas, and have provided no data. The OSC considers this investigation incomplete but ongoing.

The OSC also sought information about the machines in Wisconsin used on election night from the clerks. The clerks either did not possess the data sought by the OSC or refused to provide it, with Green Bay and Madison insinuating that providing secure voting machine data to the OSC would somehow compromise election integrity. In other words, these cities claim that it is impossible to verify the integrity of the voting machines because doing that would jeopardize the integrity of both the machines and future elections.

So let’s return to the Brooklyn attorney in the hotel room running Green Bay’s election. How was that possible? How did he manage to do it?

On election day, Spitzer Rubenstein had access to ballots and determined whichones would be counted or not counted.

Our elections can be hijacked because the electronic voting machines are hooked up to the internet. You know: the simple truth that your elected officials keep insisting is not true — and which is now indisputably true. Which brings us to the next truth: your elected officials are lying to you and they’re probably lying to you because the only way they got elected was by using corrupt voting systems.

There’s another blockbuster development mentioned in the report as well. The retired Wisconsin judge got his hands on some interesting evidence.

The OSC’s investigation discovered the use of a ballot tracking and harvestingapplication in Wisconsin. An extensive amount of time and effort went into this portion of the investigation. The OSC became attuned to the possibility of an application when reviewing email exchanges between the Zuckerberg 5 and third parties. This involved tracking applications in Georgia and Pennsylvania.

The OSC discovered ballot tracking programs in both Georgia and Pennsylvania.
The OSC was able to locate and identify the developer of both programs in those States. The OSC obtained the source code for the Pennsylvania application. Ultimately, that data and source code would not prove to be helpful to discovering information about the Wisconsin application.

The Democrats now have a very big problem: massive election fraud in 2020 is no longer a “conspiracy theory” — it’s a fact described in great detail in an official report conducted by the state officials of Wisconsin. 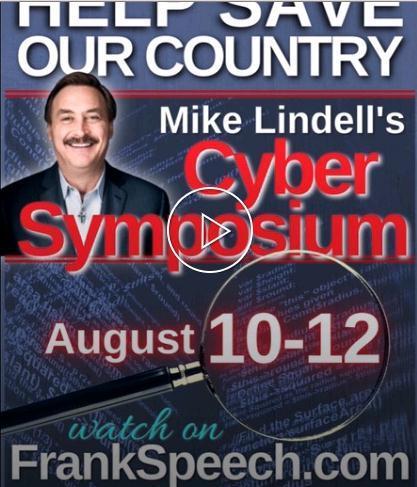 
The experts will translate the raw P-cap data from the 2020 election and participants can select any state at random and see the REAL votes the candidates actually received on Nov. 3rd.
In another room, mock elections will be held showing how the Dominion, ES&S & HART machines can use existing software to flip votes. Cyber experts will be in an adjacent room capturing the mock elections with p-cap software and then revealing the true winner after the mock election concludes without seeing any of the normal election results, using ONLY their p-cap software..
On the last day, a new voting system will be unveiled that doesn't use machines and allows everyone to check their vote online.

Mike Lindell (mypillow.com) is offering a 5 million prize if any of the cyber experts can show the p-cap information presented is either not for the 2020 election results or that it is false data.